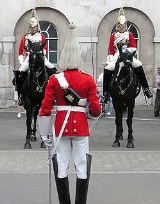 A ceremony is an event of ritual
Ritual
A ritual is a set of actions, performed mainly for their symbolic value. It may be prescribed by a religion or by the traditions of a community. The term usually excludes actions which are arbitrarily chosen by the performers....
significance, performed on a special occasion. The word may be of Etruscan origin.

A ceremony may mark a rite of passage
Rite of passage
A rite of passage is a ritual event that marks a person's progress from one status to another. It is a universal phenomenon which can show anthropologists what social hierarchies, values and beliefs are important in specific cultures....
in a human life, marking the significance of, for example:

Other, society-wide ceremonies may mark annual or seasonal or recurrent events such as:


Other ceremonies underscore the importance of non-regular special occasions, such as:

Ceremonies may have a physical display or theatrical
Theatre
Theatre is a collaborative form of fine art that uses live performers to present the experience of a real or imagined event before a live audience in a specific place. The performers may communicate this experience to the audience through combinations of gesture, speech, song, music or dance...
component: dance
Dance
Dance is an art form that generally refers to movement of the body, usually rhythmic and to music, used as a form of expression, social interaction or presented in a spiritual or performance setting....
, a procession
Procession
A procession is an organized body of people advancing in a formal or ceremonial manner.-Procession elements:...
, the laying on of hands. A declaratory verbal pronouncement may explain or cap the occasion, for instance:


Both physical and verbal components of a ceremony may become part of a liturgy
Liturgy
Liturgy is either the customary public worship done by a specific religious group, according to its particular traditions or a more precise term that distinguishes between those religious groups who believe their ritual requires the "people" to do the "work" of responding to the priest, and those...
.