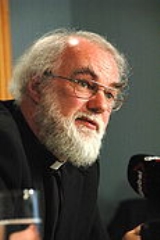 Overview
The Archbishop of Canterbury is the senior bishop
Bishop
A bishop is an ordained or consecrated member of the Christian clergy who is generally entrusted with a position of authority and oversight. Within the Catholic Church, Eastern Orthodox, Oriental Orthodox Churches, in the Assyrian Church of the East, in the Independent Catholic Churches, and in the...
and principal leader of the Church of England
Church of England
The Church of England is the officially established Christian church in England and the Mother Church of the worldwide Anglican Communion. The church considers itself within the tradition of Western Christianity and dates its formal establishment principally to the mission to England by St...
, the symbolic head of the worldwide Anglican Communion
Anglican Communion
The Anglican Communion is an international association of national and regional Anglican churches in full communion with the Church of England and specifically with its principal primate, the Archbishop of Canterbury...
, and the diocesan bishop
Diocesan bishop
A diocesan bishop — in general — is a bishop in charge of a diocese. These are to be distinguished from suffragan bishops, assistant bishops, coadjutor bishops, auxiliary bishops, metropolitans, and primates....
of the Diocese of Canterbury
Diocese of Canterbury
The Diocese of Canterbury is a Church of England diocese covering eastern Kent, founded by St. Augustine of Canterbury in 597. It is centred on Canterbury Cathedral, and is the oldest see of the Church of England....
. In his role as head of the Anglican Communion, the archbishop leads the third largest group of Christians in the world. The Prime Minister
Prime minister
A prime minister is the most senior minister of cabinet in the executive branch of government in a parliamentary system. In many systems, the prime minister selects and may dismiss other members of the cabinet, and allocates posts to members within the government. In most systems, the prime...
of the United Kingdom
United Kingdom
The United Kingdom of Great Britain and Northern IrelandIn the United Kingdom and Dependencies, other languages have been officially recognised as legitimate autochthonous languages under the European Charter for Regional or Minority Languages...
chooses which person will become the next archbishop.

The current archbishop is the Most Reverend
Most Reverend
The Most Reverend is a style applied to certain religious figures.*In the Roman Catholic Church , all bishops are styled "The Most Reverend", as well as monsignors of the rank of protonotary apostolic de numero.*In the Roman Catholic Church , archbishops are styled "The...
Rowan Williams
Rowan Williams
Rowan Douglas Williams FRSL, FBA, FLSW is an Anglican bishop, poet and theologian. He is the 104th and current Archbishop of Canterbury, Metropolitan of the Province of Canterbury and Primate of All England, offices he has held since early 2003.Williams was previously Bishop of Monmouth and...
. He is the 104th in a line which goes back more than 1400 years to St Augustine of Canterbury, the "Apostle to the English", in the year 597.

1293    Robert Winchelsey leaves England for Rome, to be consecrated as Archbishop of Canterbury.

1533    The Archbishop of Canterbury Thomas Cranmer declares the marriage of King Henry VIII of England to Anne Boleyn valid.

1556    In Oxford, Archbishop of Canterbury Thomas Cranmer is burned at the stake.