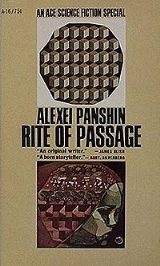 Encyclopedia
A rite of passage is a ritual
Ritual
A ritual is a set of actions, performed mainly for their symbolic value. It may be prescribed by a religion or by the traditions of a community. The term usually excludes actions which are arbitrarily chosen by the performers....
event that marks a person's progress from one status
Social status
In sociology or anthropology, social status is the honor or prestige attached to one's position in society . It may also refer to a rank or position that one holds in a group, for example son or daughter, playmate, pupil, etc....
to another. It is a universal phenomenon which can show anthropologists what social hierarchies, values and beliefs are important in specific cultures.

Rites of passage are often ceremonies surrounding events such as other milestones within puberty
Puberty
Puberty is the process of physical changes by which a child's body matures into an adult body capable of reproduction, as initiated by hormonal signals from the brain to the gonads; the ovaries in a girl, the testes in a boy...
, coming of age
Coming of age
Coming of age is a young person's transition from childhood to adulthood. The age at which this transition takes place varies in society, as does the nature of the transition. It can be a simple legal convention or can be part of a ritual, as practiced by many societies...
, marriage
Marriage
Marriage is a social union or legal contract between people that creates kinship. It is an institution in which interpersonal relationships, usually intimate and sexual, are acknowledged in a variety of ways, depending on the culture or subculture in which it is found...
and death
Death
Death is the permanent termination of the biological functions that sustain a living organism. Phenomena which commonly bring about death include old age, predation, malnutrition, disease, and accidents or trauma resulting in terminal injury....
. Initiation ceremonies such as baptism
Baptism
In Christianity, baptism is for the majority the rite of admission , almost invariably with the use of water, into the Christian Church generally and also membership of a particular church tradition...
, confirmation and Bar or Bat Mitzvah are considered important rites of passage for people of their respective religions.

The concept of rites of passage as a general theory of socialization
Socialization
Socialization is a term used by sociologists, social psychologists, anthropologists, political scientists and educationalists to refer to the process of inheriting and disseminating norms, customs and ideologies...
was first formally enunciated by Arnold van Gennep
Arnold van Gennep
Arnold van Gennep was a noted French ethnographer and folklorist.-Biography:He was born in Ludwigsburg, Kingdom of Württemberg...
in his book (published 1909) The Rites of Passage to denote rituals marking the transitional phase between childhood and full inclusion into a tribe or social group. Gennep's work exercised a deep impact on anthropological thought.

Rites of passage have three phases: separation, transition, and reincorporation, as van Gennep described. "I propose to call the rites of separation from a previous world, preliminal rites, those executed during the transitional stage liminal (or threshold) rites, and the ceremonies of incorporation into the new world postliminal rites."

In the first phase, people withdraw from their current status and prepare to move from one place or status to another. "The first phase (of separation) comprises symbolic behaviour signifying the detachment of the individual or group ... from an earlier fixed point in the social structure." There is often a detachment or "cutting away" from the former self in this phase, which is signified in symbolic actions and rituals. For example, the cutting of the hair for a person who has just joined the army. He or she is "cutting away" the former self—the civilian.

The transition (liminal) phase is the period between states, during which one has left one place or state but hasn't yet entered or joined the next. "The attributes of liminality or of liminal personae ("threshhold people") are necessarily ambiguous."

"In the third phase (reaggregation or reincorporation) the passage is consummated [by] the ritual subject." Having completed the rite and assumed their "new" identity, one re-enters society with one's new status. Re-incorporation is characterized by elaborate rituals and ceremonies, like debutant balls and college graduation, and by new ties signs: thus "in rites of incorporation there is widespread use of the 'sacred bond', the 'sacred cord', the knot, and of analogous forms such as the belt, the ring, the bracelet and the crown."

Initiation rites are seen as fundamental to human growth and development as well as socialization in many African communities. These rites function by ritually marking the transition of someone to full group membership. It also links individuals to the community and the community to the broader and more potent spiritual world. Initiation rites are a natural and necessary part of a community, just as arms and legs are natural and necessary extension of the human body. These rites are linked to individual and community development. Dr. Manu Ampim identifies five stages; rite to birth, rite to adulthood, rite to marriage, rite to eldership and rite to ancestorship. In Zulu culture entering womanhood is celebrated by the Umhlanga (ceremony).

Rites of passage are diverse, and are often not recognized as such in the culture in which they occur. Many societal rituals may look like rites of passage but miss some of the important structural and functional components. Typically the missing piece is the societal recognition and reincorporation phase. Adventure Education programs, such as Outward Bound
Outward Bound
Outward Bound is an international, non-profit, independent, outdoor educationorganization with approximately 40 schools around the world and 200,000 participants per year...
, have often been described as potential rites of passage. Pamela Cushing researched the rites of passage impact upon adolescent youth at the Canadian Outward Bound School and found the rite of passage impact was lessened by the missing reincorporation phase (Cushing, 1998). Bell (2003) presented more evidence of this lacking third stage and described the "Contemporary Adventure Model of a Rites of Passage" as a modern and weaker version of the rites of passage typically used by outdoor adventure programs. For non-religious people, Rites of Passage are important as well. They mark important changes in our lives and they help to guide us.

In various tribal societies, entry into an age grade
Age grade
In sociology and anthropology, an age grade or age class is a form of social organization based on age, within a series of such categories, through which individuals pass over the course of their lives....
—generally gender-separated—(unlike an age set
Age set
In anthropology, an age set is a social category or corporate social group, consisting of people of similar age, who have a common identity, maintain close ties over a prolonged period, and together pass through a series of age-related statuses...
) is marked by an initiation rite, which may be the crowning of a long and complex preparation, sometimes in retreat. 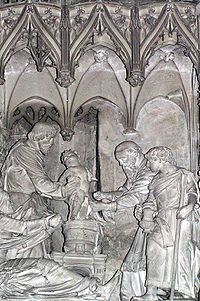 Some academic circles such as dorms, fraternities, teams and other clubs practice

Entrance into Medicine and Pharmacy (University):

Entrance to the profession of Engineer: