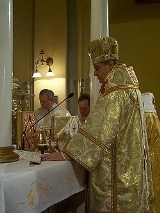 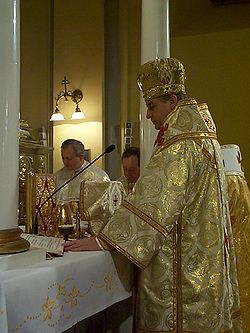 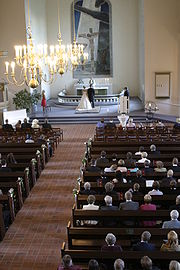 Liturgy is either the customary public worship
Worship
Worship is an act of religious devotion usually directed towards a deity. The word is derived from the Old English worthscipe, meaning worthiness or worth-ship — to give, at its simplest, worth to something, for example, Christian worship.Evelyn Underhill defines worship thus: "The absolute...
done by a specific religious group, according to its particular traditions (corresponding to ritual) or a more precise term that distinguishes between those religious groups who believe their ritual requires the "people" to do the "work" of responding to the priest, and those who do not (hence leitourgia = work of the people).

The word, sometimes rendered by its English
English language
English is a West Germanic language that arose in the Anglo-Saxon kingdoms of England and spread into what was to become south-east Scotland under the influence of the Anglian medieval kingdom of Northumbria...
translation "service", may refer to an elaborate formal ritual
Ritual
A ritual is a set of actions, performed mainly for their symbolic value. It may be prescribed by a religion or by the traditions of a community. The term usually excludes actions which are arbitrarily chosen by the performers....
such as the Eastern Orthodox Divine Liturgy
Divine Liturgy
Divine Liturgy is the common term for the Eucharistic service of the Byzantine tradition of Christian liturgy. As such, it is used in the Eastern Orthodox and Eastern Catholic Churches. Armenian Christians, both of the Armenian Apostolic Church and of the Armenian Catholic Church, use the same term...
and Catholic Mass
Mass (liturgy)
"Mass" is one of the names by which the sacrament of the Eucharist is called in the Roman Catholic Church: others are "Eucharist", the "Lord's Supper", the "Breaking of Bread", the "Eucharistic assembly ", the "memorial of the Lord's Passion and Resurrection", the "Holy Sacrifice", the "Holy and...
, or a daily activity such as the Muslim
Muslim
A Muslim, also spelled Moslem, is an adherent of Islam, a monotheistic, Abrahamic religion based on the Quran, which Muslims consider the verbatim word of God as revealed to prophet Muhammad. "Muslim" is the Arabic term for "submitter" .Muslims believe that God is one and incomparable...
salat
Salat
Salah is the practice of formal prayer in Islam. Its importance for Muslims is indicated by its status as one of the Five Pillars of Sunni Islam, of the Ten Practices of the Religion of Twelver Islam and of the 7 pillars of Musta'lī Ismailis...
and Jewish services
Jewish services
Jewish prayer are the prayer recitations that form part of the observance of Judaism. These prayers, often with instructions and commentary, are found in the siddur, the traditional Jewish prayer book....
. As a religious phenomenon, liturgy is a communal response to the sacred through activity reflecting praise, thanksgiving, supplication
Supplication
Supplication is the most common form of prayer, wherein a person asks God to provide something, either for the person or who is doing the praying or for someone else on whose behalf a prayer. This because of a supplication is being made, also known as intercession.The concept of supplication is...
, or repentance. Ritualization may be associated with life events such as birth, coming of age
Coming of age
Coming of age is a young person's transition from childhood to adulthood. The age at which this transition takes place varies in society, as does the nature of the transition. It can be a simple legal convention or can be part of a ritual, as practiced by many societies...
, marriage and death. It thus forms the basis for establishing a relationship with a divine agency, as well as with other participants in the liturgy. Methods of dress, preparation of food, application of cosmetics or other hygienic practices are all considered liturgical activities.

The familiar sense of the word is an extension of the technical term in ancient Greek
Ancient Greek
Ancient Greek is the stage of the Greek language in the periods spanning the times c. 9th–6th centuries BC, , c. 5th–4th centuries BC , and the c. 3rd century BC – 6th century AD of ancient Greece and the ancient world; being predated in the 2nd millennium BC by Mycenaean Greek...
, leitourgia
Liturgy (ancient Greece)
The Liturgy was in ancient Greece a public service established by the city-state whereby its richest members , more or less voluntarily, financed the State with their personal wealth. It took its legitimacy from the idea that "personal wealth is possessed only through delegation from the city"...
, signifying the often expensive offers of service to the people, and thus to the polis
Polis
Polis , plural poleis , literally means city in Greek. It could also mean citizenship and body of citizens. In modern historiography "polis" is normally used to indicate the ancient Greek city-states, like Classical Athens and its contemporaries, so polis is often translated as "city-state."The...
and the state. Through the leitourgia the rich carried a financial burden and were correspondingly rewarded with honours. The leitourgia became both mandatory and honorific, supporting the patron's standing among the elite. The holder of a Hellenic leitourgia was not taxed a specific sum, but entrusted with a particular ritual, which could be performed with greater or lesser magnificence. The chief sphere remained that of civic religion, embodied in the festivals: M.I. Finley notes "in Demosthenes
Demosthenes
Demosthenes was a prominent Greek statesman and orator of ancient Athens. His orations constitute a significant expression of contemporary Athenian intellectual prowess and provide an insight into the politics and culture of ancient Greece during the 4th century BC. Demosthenes learned rhetoric by...
' day there were at least 97 liturgical appointments in Athens for the festivals, rising to 118 in a (quadrennial) Panathenaic year." Eventually, under the Roman Empire
Roman Empire
The Roman Empire was the post-Republican period of the ancient Roman civilization, characterised by an autocratic form of government and large territorial holdings in Europe and around the Mediterranean....
, such obligations, known as munera
Munera (Roman contest)
In ancient Rome, munera were public works provided for the benefit of the Roman people by individuals of high status and wealth. The word munera, singular munus means "duty, obligation", expressing the individual's responsibility to provide a service or contribution to his community...
, devolved into a competitive and ruinously expensive burden that was avoided when possible.


Frequently in Christianity
Christianity
Christianity is a monotheistic religion based on the life and teachings of Jesus as presented in canonical gospels and other New Testament writings...
a distinction is made between "liturgical" and "non-liturgical" churches based on the elaboration and/or antiquity of the worship, but this obscures the universality of public worship as a religious phenomenon. Thus, even the open or waiting worship of Quakers
Religious Society of Friends
The Religious Society of Friends, or Friends Church, is a Christian movement which stresses the doctrine of the priesthood of all believers. Members are known as Friends, or popularly as Quakers. It is made of independent organisations, which have split from one another due to doctrinal differences...
is liturgical, since the waiting itself until the Holy Spirit moves individuals to speak is a prescribed form of Quaker worship, sometimes referred to as "the liturgy of silence." Typically in Christianity, however, the term "the liturgy" normally refers to a standardized order of events observed during a religious service, be it a sacrament
Sacrament
A sacrament is a sacred rite recognized as of particular importance and significance. There are various views on the existence and meaning of such rites.-General definitions and terms:...
al service or a service of public prayer
Prayer
Prayer is a form of religious practice that seeks to activate a volitional rapport to a deity through deliberate practice. Prayer may be either individual or communal and take place in public or in private. It may involve the use of words or song. When language is used, prayer may take the form of...
. In the Catholic tradition, liturgy is considered to mean the participation of the people in the work of God and in the liturgy Jesus Christ is considered to continue the work of redemption in union with his Church.