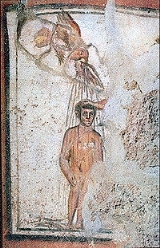 Overview
In Christianity
Christianity
Christianity is a monotheistic religion based on the life and teachings of Jesus as presented in canonical gospels and other New Testament writings...
, baptism (from the Greek
Greek language
Greek is an independent branch of the Indo-European family of languages. Native to the southern Balkans, it has the longest documented history of any Indo-European language, spanning 34 centuries of written records. Its writing system has been the Greek alphabet for the majority of its history;...
noun Βάπτισμα baptisma; itself derived from baptismos, washing) is for the majority the rite
Rite
A rite is an established, ceremonious, usually religious act. Rites in this sense fall into three major categories:* rites of passage, generally changing an individual's social status, such as marriage, baptism, or graduation....
of admission
Initiation
Initiation is a rite of passage ceremony marking entrance or acceptance into a group or society. It could also be a formal admission to adulthood in a community or one of its formal components...
(or adoption
Adoption
Adoption is a process whereby a person assumes the parenting for another and, in so doing, permanently transfers all rights and responsibilities from the original parent or parents...
), almost invariably with the use of water, into the Christian Church
Christian Church
The Christian Church is the assembly or association of followers of Jesus Christ. The Greek term ἐκκλησία that in its appearances in the New Testament is usually translated as "church" basically means "assembly"...
generally and also membership of a particular church tradition. Baptism has been called a sacrament
Sacrament
A sacrament is a sacred rite recognized as of particular importance and significance. There are various views on the existence and meaning of such rites.-General definitions and terms:...
and an ordinance
Ordinance (Christian)
Ordinance is a Protestant Christian term for baptism, communion and other religious rituals. Some Protestants, like the Mennonites, do not call them "sacraments" because they believe these rituals are outward expressions of faith, rather than impartations of God's grace.While a sacrament is seen...
of Jesus Christ.

In some traditions, baptism is also called christening
Christening
Christening is a naming ceremony associated with:*Baptism*Infant baptism*Ship naming and launching...
, but for others the word "christening" is reserved for the baptism of infants
Infant baptism
Infant baptism is the practice of baptising infants or young children. In theological discussions, the practice is sometimes referred to as paedobaptism or pedobaptism from the Greek pais meaning "child." The practice is sometimes contrasted with what is called "believer's baptism", or...
.

The New Testament reports that Jesus himself was baptized
Baptism of Jesus
The baptism of Jesus marks the beginning of Jesus Christ's public ministry. This event is recorded in the Canonical Gospels of Matthew, Mark and Luke. In John 1:29-33 rather than a direct narrative, the Baptist bears witness to the episode...
.
The usual form of baptism among the earliest Christians was for the candidate to be immersed totally (submersion) or partially (standing or kneeling in water while water was poured on him or her).

If the religious orientation in Sweden how many followers have this that case? What happened when the church was founded? Where is this religiou...
More
x