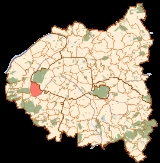 With an average household income of 28,742 €, Boulogne-Billancourt is the wealthiest among French communes of more than 100,000 inhabitants, followed by Paris
Paris
Paris is the capital and largest city in France, situated on the river Seine, in northern France, at the heart of the Île-de-France region...
.

Boulogne-Billancourt is the most populous suburb of Paris and one of the most densely populated
Population density
Population density is a measurement of population per unit area or unit volume. It is frequently applied to living organisms, and particularly to humans...
municipalities in Europe
Europe
Europe is, by convention, one of the world's seven continents. Comprising the westernmost peninsula of Eurasia, Europe is generally 'divided' from Asia to its east by the watershed divides of the Ural and Caucasus Mountains, the Ural River, the Caspian and Black Seas, and the waterways connecting...
. Formerly an important industrial site, it has successfully reconverted into business services and is now home to major communication companies headquartered in the Val de Seine
Val de Seine
The Val de Seine is one of the more important business districts of the Paris agglomeration. Located southwest of the city, it spreads along a bend of the Seine, mainly in the municipalities...
business district
Central business district
A central business district is the commercial and often geographic heart of a city. In North America this part of a city is commonly referred to as "downtown" or "city center"...
.

The original name of the commune was Boulogne-sur-Seine (meaning "Boulogne upon Seine
Seine
The Seine is a -long river and an important commercial waterway within the Paris Basin in the north of France. It rises at Saint-Seine near Dijon in northeastern France in the Langres plateau, flowing through Paris and into the English Channel at Le Havre . It is navigable by ocean-going vessels...
").

Before the 14th century, Boulogne was a small village called Menuls-lès-Saint-Cloud (meaning "Menuls near Saint-Cloud
Saint-Cloud
Saint-Cloud is a commune in the western suburbs of Paris, France. It is located from the centre of Paris.Like other communes of the Hauts-de-Seine such as Marnes-la-Coquette, Neuilly-sur-Seine or Vaucresson, Saint-Cloud is one of the wealthiest cities in France, ranked 22nd out of the 36500 in...
"). In the beginning of the 14th century, King Philip IV of France
Philip IV of France
Philip the Fair was, as Philip IV, King of France from 1285 until his death. He was the husband of Joan I of Navarre, by virtue of which he was, as Philip I, King of Navarre and Count of Champagne from 1284 to 1305.-Youth:A member of the House of Capet, Philip was born at the Palace of...
ordered the building in Menuls-lès-Saint-Cloud of a church dedicated to the virgin of the sanctuary of Boulogne-sur-Mer
Boulogne-sur-Mer
-Road:* Metropolitan bus services are operated by the TCRB* Coach services to Calais and Dunkerque* A16 motorway-Rail:* The main railway station is Gare de Boulogne-Ville and located in the south of the city....
, then a famous pilgrimage center in northern France. The church, meant to become a pilgrimage centre closer to Paris than the distant city of Boulogne-sur-Mer, was named Notre-Dame de Boulogne la Petite ("Our Lady of Boulogne the Minor"). Gradually, the village of Menuls-lès-Saint-Cloud became known as Boulogne-la-Petite, and later as Boulogne-sur-Seine.

In 1924, Boulogne-sur-Seine was officially renamed Boulogne-Billancourt, to reflect the development of the industrial neighbourhood of Billancourt annexed in 1860 (see history section below).

As for the name Billancourt, it was recorded for the first time in 1150 as Bullencort, sometimes also spelled Bollencort. It comes from Medieval Latin
Medieval Latin
Medieval Latin was the form of Latin used in the Middle Ages, primarily as a medium of scholarly exchange and as the liturgical language of the medieval Roman Catholic Church, but also as a language of science, literature, law, and administration. Despite the clerical origin of many of its authors,...
cortem, accusative
Accusative case
The accusative case of a noun is the grammatical case used to mark the direct object of a transitive verb. The same case is used in many languages for the objects of prepositions...
of cors, meaning "enclosure", "estate", suffixed to the Germanic patronym Buolo (meaning "friend, brother, kinsman"), thus having the meaning of "estate of Buolo".

On 1 January 1860, the city of Paris was enlarged by annexing neighbouring communes. On that occasion, the communes of Auteuil
Auteuil
Auteuil may refer to:* Auteuil-Neuilly-Passy, an area of Paris* Auteuil, Quebec, a borough of Laval, Quebec, CanadaAuteuil is the name of several communes in France:* Auteuil, Oise* Auteuil, YvelinesAuteuil is also a surname:...
and Passy
Passy
Passy is an area of Paris, France, located in the XVIe arrondissement, on the Right Bank. It is traditionally home to many of the city's wealthiest residents.Passy was formerly a commune...
were disbanded and divided between Boulogne-Billancourt (then called Boulogne-sur-Seine) and the city of Paris. Boulogne-sur-Seine received a small part of the territory of Passy, and about half of the territory of Auteuil (including the area of Billancourt, which belonged to the disbanded commune of Auteuil).

Boulogne-Billancourt is famous for being the birthplace of three major industries: cinema
Film
A film, also called a movie or motion picture, is a series of still or moving images. It is produced by recording photographic images with cameras, or by creating images using animation techniques or visual effects...
, automobile
Automobile
An automobile, autocar, motor car or car is a wheeled motor vehicle used for transporting passengers, which also carries its own engine or motor...
, and aircraft
Aircraft
An aircraft is a vehicle that is able to fly by gaining support from the air, or, in general, the atmosphere of a planet. An aircraft counters the force of gravity by using either static lift or by using the dynamic lift of an airfoil, or in a few cases the downward thrust from jet engines.Although...
.

With the city of Sèvres
Sèvres
Sèvres is a commune in the southwestern suburbs of Paris, France. It is located from the centre of Paris.The town is known for its porcelain manufacture, the Manufacture nationale de Sèvres, making the famous Sèvres porcelain, as well as being the location of the International Bureau of Weights...
, Boulogne-Billancourt is part of the communauté d'agglomération
Communauté d'agglomération
An agglomeration community is a metropolitan government structure in France, created by the Chevènement Law of 1999. It is one of three forms of intercommunality, less integrated than an urban community but more integrated than a community of communes...
Val de Seine.

Boulogne-Billancourt hosts the global headquarters of several multinational companies, including:

Boulogne-Billancourt was the birthplace of:

Boulogne-Billancourt is twinned
Town twinning
Twin towns and sister cities are two of many terms used to describe the cooperative agreements between towns, cities, and even counties in geographically and politically distinct areas to promote cultural and commercial ties.- Terminology :...
with: