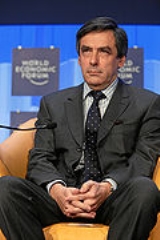 Encyclopedia
The Prime Minister of France (Premier ministre français) in the Fifth Republic
French Fifth Republic
The Fifth Republic is the fifth and current republican constitution of France, introduced on 4 October 1958. The Fifth Republic emerged from the collapse of the French Fourth Republic, replacing the prior parliamentary government with a semi-presidential system...
is the head of government
Head of government
Head of government is the chief officer of the executive branch of a government, often presiding over a cabinet. In a parliamentary system, the head of government is often styled prime minister, chief minister, premier, etc...
and of the Council of Ministers
French government ministers
The Cabinet of France is a body of top administration members of the Prime Minister's Cabinet. In French, the word gouvernement generally refers to the "Administration", but in a narrower sense to the Cabinet.The Council is responsible to the French National Assembly...
of France. The head of state
Head of State
A head of state is the individual that serves as the chief public representative of a monarchy, republic, federation, commonwealth or other kind of state. His or her role generally includes legitimizing the state and exercising the political powers, functions, and duties granted to the head of...
is the President of the French Republic
President of the French Republic
The President of the French Republic colloquially referred to in English as the President of France, is France's elected Head of State....
. During the Third
French Third Republic
The French Third Republic was the republican government of France from 1870, when the Second French Empire collapsed due to the French defeat in the Franco-Prussian War, to 1940, when France was overrun by Nazi Germany during World War II, resulting in the German and Italian occupations of France...
and Fourth
French Fourth Republic
The French Fourth Republic was the republican government of France between 1946 and 1958, governed by the fourth republican constitution. It was in many ways a revival of the Third Republic, which was in place before World War II, and suffered many of the same problems...
Republics, the Head of Government was called President of the Council of Ministers (Président du Conseil des Ministres), generally shortened to President of the Council (Président du Conseil).

The prime minister proposes the list of other ministers to the president. Decrees and decisions of the prime minister, like almost all executive decisions, are subject to the oversight of the administrative court system. Few decrees are taken after advice from the Council of State (Conseil d'État).

All prime ministers defend the programs of their ministry, and make budgetary choices. The extent to which those decisions lie with the prime minister or president depends upon whether they are of the same party.

The prime minister, in its current form, dates from the formation of the French Third Republic
French Third Republic
The French Third Republic was the republican government of France from 1870, when the Second French Empire collapsed due to the French defeat in the Franco-Prussian War, to 1940, when France was overrun by Nazi Germany during World War II, resulting in the German and Italian occupations of France...
. Under the French Constitutional Laws of 1875
French Constitutional Laws of 1875
The Constitutional Laws of 1875 are the laws passed in France by the National Assembly between February and July 1875 which established the Third French Republic.The constitution laws could be roughly divided into three laws:...
, he was imbued with the same powers as his British counterpart
Prime Minister of the United Kingdom
The Prime Minister of the United Kingdom of Great Britain and Northern Ireland is the Head of Her Majesty's Government in the United Kingdom. The Prime Minister and Cabinet are collectively accountable for their policies and actions to the Sovereign, to Parliament, to their political party and...
.

In practice, however, the prime minister was a fairly weak figure. Most notably, the legislature had the power to force the entire cabinet out of office by a vote of censure. As a result, cabinets were often toppled twice a year, and there were long stretches where France was left without a government.

The prime minister is named by the President of the Republic. Because the National Assembly
French National Assembly
The French National Assembly is the lower house of the bicameral Parliament of France under the Fifth Republic. The upper house is the Senate ....
can, by a vote of censure
Censure
A censure is an expression of strong disapproval or harsh criticism. Among the forms that it can take are a stern rebuke by a legislature, a spiritual penalty imposed by a church, and a negative judgment pronounced on a theological proposition.-Politics:...
, force the resignation of the government, the choice of prime minister must reflect the majority in the Assembly. The situation where the president and the prime minister are from opposing parties is called cohabitation
Cohabitation (government)
Cohabitation in government occurs in semi-presidential systems, such as France's system, when the President is from a different political party than the majority of the members of parliament. It occurs because such a system forces the president to name a premier that will be acceptable to the...
.

Prime ministers are normally chosen from amongst the ranks of the National Assembly. However, on rare occasions, the prime minister is a non-officeholder selected by the President of France because of bureaucratic experience, foreign service, or success in business management. Dominique de Villepin
Dominique de Villepin
Dominique Marie François René Galouzeau de Villepin is a French politician who served as the Prime Minister of France from 31 May 2005 to 17 May 2007....
, for example, served as prime minister from 2005 to 2007 without ever having held elected office.