Boulogne sur Mer is famous for hosting one of the oldest Universités de l'été - summer courses in French language and culture.

The Saint-Louis building of the University of the Côte d'Opale's Boulogne campus opened its doors in 1991, on the site of the former St. Louis hospital, the front entrance to which remains a predominant architectural feature. Its 6 major specialisms are Modern Languages, French Literature, Sport, Law, History and Economics.
The University is situated in the town centre, about 5 minutes from the Boulogne Tintelleries train station.

As an international maritime port on the English Channel
English Channel
The English Channel , often referred to simply as the Channel, is an arm of the Atlantic Ocean that separates southern England from northern France, and joins the North Sea to the Atlantic. It is about long and varies in width from at its widest to in the Strait of Dover...
(La Manche), the town of Boulogne-sur-Mer has European and American influences in local cuisine. They include:


Others associated with Boulogne 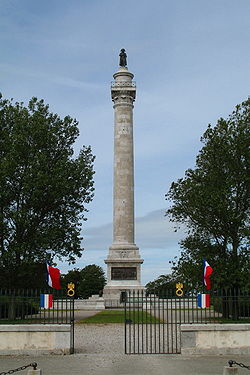 Boulogne-sur-Mer is twinned with: Folkestone, United Kingdom La Plata
La Plata
La Plata is the capital city of the Province of Buenos Aires, Argentina, and of La Plata partido. According to the , the city proper has a population of 574,369 and its metropolitan area has 694,253 inhabitants....
, Argentina
Argentina
Argentina , officially the Argentine Republic , is the second largest country in South America by land area, after Brazil. It is constituted as a federation of 23 provinces and an autonomous city, Buenos Aires...
Zweibrücken
Zweibrücken
Zweibrücken is a city in Rhineland-Palatinate, Germany, on the Schwarzbach river.- Name :Zweibrücken appears in Latin texts as Geminus Pons and Bipontum, in French texts as Deux-Ponts. The name derives from Middle High German Zweinbrücken...
, Germany - since 1959