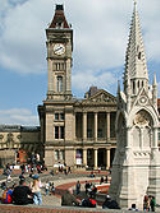 Encyclopedia
Birmingham Museum and Art Gallery (BM&AG) is a museum and art gallery in Birmingham
Birmingham
Birmingham is a city and metropolitan borough in the West Midlands of England. It is the most populous British city outside the capital London, with a population of 1,036,900 , and lies at the heart of the West Midlands conurbation, the second most populous urban area in the United Kingdom with a...
, England
England
England is a country that is part of the United Kingdom. It shares land borders with Scotland to the north and Wales to the west; the Irish Sea is to the north west, the Celtic Sea to the south west, with the North Sea to the east and the English Channel to the south separating it from continental...
.

Entrance to the Museum and Art Gallery is free, but some major exhibitions in the Gas Hall incur an entrance fee. It has a collection of international importance covering fine art
Fine art
Fine art or the fine arts encompass art forms developed primarily for aesthetics and/or concept rather than practical application. Art is often a synonym for fine art, as employed in the term "art gallery"....
, ceramic
Ceramic
A ceramic is an inorganic, nonmetallic solid prepared by the action of heat and subsequent cooling. Ceramic materials may have a crystalline or partly crystalline structure, or may be amorphous...
s, metalwork, jewellery
Jewellery
Jewellery or jewelry is a form of personal adornment, such as brooches, rings, necklaces, earrings, and bracelets.With some exceptions, such as medical alert bracelets or military dog tags, jewellery normally differs from other items of personal adornment in that it has no other purpose than to...
, archaeology
Archaeology
Archaeology, or archeology , is the study of human society, primarily through the recovery and analysis of the material culture and environmental data that they have left behind, which includes artifacts, architecture, biofacts and cultural landscapes...
, ethnography
Ethnography
Ethnography is a qualitative method aimed to learn and understand cultural phenomena which reflect the knowledge and system of meanings guiding the life of a cultural group...
, local history
Local history
Local history is the study of history in a geographically local context and it often concentrates on the local community. It incorporates cultural and social aspects of history...
and industrial history
Industrial history
Industry in the sense of professional manufacturing has existed for millennia, since the first cities rose.-Cottage industry:A cottage industry is an industry – primarily manufacturing – which includes many producers, working from their homes, typically part time...
. 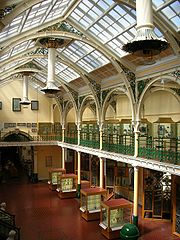 The Museums Act 1845
Museums Act 1845
The Museums Act 1845 was an Act of the United Kingdom Parliament which gave the town councils of larger municipal boroughs the power to establish museums.-Historical background:...
“[empowered] boroughs with a population of 10,000 or more to raise a 1/2d for the establishment of museums.” In 1864 the first public exhibition room, was opened when the Society and other donors presented 64 pictures as well as the Sultanganj Buddha
Sultanganj Buddha
The Sultanganj Buddha is the largest complete bronze figure of its kind in the world. The statue is dated by archaeologists at between 500 to 700 AD. It is 2.3m high and 1m wide, weighs over 500kg and was made using the lost wax technique...
to Birmingham Council and these were housed in the Free Library building but, due to lack of space, the pictures had to move to Aston Hall
Aston Hall
Aston Hall is a municipally owned Jacobean-style mansion in Aston, Birmingham, England. Washington Irving used it as the model for Bracebridge Hall in his stories in The Sketch Book of Geoffrey Crayon.-History:...
. Joseph Nettlefold donated twenty-five pictures by David Cox
David Cox
David Cox may refer to:*David Cox , former member of the House of Representatives for the Division of Kingston*David Cox , English landscape painter*Sir David Cox , English statistician...
to Birmingham Art Gallery on the condition it opened on Sundays.

Jesse Collings
Jesse Collings
Jesse Collings was Mayor of Birmingham, England, a Liberal member of Parliament, but was best known nationally in the UK as an advocate of educational reform and land reform.-Background:...
, Mayor of Birmingham 1878-79, was responsible for free libraries in Birmingham and was the original proponent of the Birmingham Art Gallery. A £10,000 (2010: £) gift by Sir Richard and George Tangye
Richard Tangye
Sir Richard Trevithick Tangye was a British manufacturer of engines and other heavy equipment.-Biography:...
started a new drive for an art gallery and, in 1885, following other donations and £40,000 from the council, the Prince of Wales officially opened the new gallery. The Museum and Art Gallery occupied an extended part of the Council House
Council House, Birmingham
Birmingham City Council House in Birmingham, England is the home of Birmingham City Council. It provides office accommodation for both employed council officers, including the Chief Executive, and elected council members, plus the council chamber, Lord Mayor's Suite, committee rooms and a large and...
above the new offices of the municipal Gas Department (which in effect subsidised the venture thus circumventing the Public Libraries Act 1850
Public Libraries Act 1850
The Public Libraries Act 1850 was an Act of the United Kingdom Parliament which first gave local boroughs the power to establish free public libraries...
which limited the use of public funds on the arts).The building was designed by Yeoville Thomason
Yeoville Thomason
H. R. Yeoville Thomason was an architect in Birmingham, England. He was born in Edinburgh to a Birmingham family. Thomason set up his own practice in Birmingham 1853-1854....
.

Until 1946, when Property Taxes
Council tax
Council Tax is the system of local taxation used in England, Scotland and Wales to part fund the services provided by local government in each country. It was introduced in 1993 by the Local Government Finance Act 1992, as a successor to the unpopular Community Charge...
were voted towards acquisitions, the museum relied on the generosity of private individuals. John Feeney
John Feeney (newspaper proprietor)
John Feeney , newspaper proprietor and philanthropist, was one of a proprietor of the Birmingham Post, in partnership with John Jaffray in succession to his father John Frederick Feeney....
provided £50,000 to provide a further gallery.

In 1951 the Museum of Science and Industry, Birmingham was incorporated into BM&AG. In 2001 the Science Museum closed with some exhibits being transferred to Thinktank, Birmingham
Thinktank, Birmingham
Thinktank is a science museum in Birmingham, England. Opened in 2001, it succeeded and has several exhibits from the City's Museum of Science and Industry. It is part of the Millennium Point complex.-Building:...
science museum, which is operated by the independent Thinktank Trust. The main entrance is located in Chamberlain Square
Chamberlain Square
Chamberlain Square or Chamberlain Place is a public square in central Birmingham, England , named after Joseph Chamberlain.Its features include:*Birmingham Central Library*Paradise Forum...
below the clock tower known locally as, “Big Brum
Big Brum
Big Brum is the local name for the clock tower on the Council House, Birmingham, England. The clock tower is sufficiently important in the public consciousness of Birmingham people that it has a name. Brum is the local term for the town, the people and the dialect. The name refers to the clock and...
”. The entrance hall memorial reads 'By the gains of Industry we promote Art'.
The Extension Block has entrances via the Gas Hall (Edmund Street
Edmund Street
__notoc__Edmund Street is a street located in Birmingham, England.Edmund Street is one of a series of roads on the old Colmore Estate which originally stretched from Temple Row in the city centre, around St Phillip's Cathedral, to the northern end of Newhall Street. Originally the estate surrounded...
) and Great Charles Street. Waterhall (the old gas department) has its own entrance on Edmund Street.

The collection of antiquities includes coins from ancient times through to the Middle Ages
Middle Ages
The Middle Ages is a periodization of European history from the 5th century to the 15th century. The Middle Ages follows the fall of the Western Roman Empire in 476 and precedes the Early Modern Era. It is the middle period of a three-period division of Western history: Classic, Medieval and Modern...
, artefacts from Ancient India and Central Asia, Ancient Cyprus
Ancient history of Cyprus
The ancient history of Cyprus, also known as Classical Antiquity, dates from the 8th century BC to the Middle Ages. The earliest written records relating to Cyprus date to the Middle Bronze Age , see Alasiya.-Assyrian Period:...
and Ancient Egypt
Ancient Egypt
Ancient Egypt was an ancient civilization of Northeastern Africa, concentrated along the lower reaches of the Nile River in what is now the modern country of Egypt. Egyptian civilization coalesced around 3150 BC with the political unification of Upper and Lower Egypt under the first pharaoh...
. There is material from Classical Greece
Classical Greece
Classical Greece was a 200 year period in Greek culture lasting from the 5th through 4th centuries BC. This classical period had a powerful influence on the Roman Empire and greatly influenced the foundation of Western civilizations. Much of modern Western politics, artistic thought, such as...
, the Roman Empire
Roman Empire
The Roman Empire was the post-Republican period of the ancient Roman civilization, characterised by an autocratic form of government and large territorial holdings in Europe and around the Mediterranean....
and Latin America
Latin America
Latin America is a region of the Americas where Romance languages  – particularly Spanish and Portuguese, and variably French – are primarily spoken. Latin America has an area of approximately 21,069,500 km² , almost 3.9% of the Earth's surface or 14.1% of its land surface area...
. There is also mediaeval
Medieval art
The medieval art of the Western world covers a vast scope of time and place, over 1000 years of art history in Europe, and at times the Middle East and North Africa...
material.

In respect of local and industrial history, the tower of the Birmingham HP Sauce
HP Sauce
HP Sauce is a popular brown sauce originally produced by HP Foods in the UK, now produced by H.J. Heinz in the Netherlands.It is the best-known brand of brown sauce in the United Kingdom and Canada as well as the best selling, with 71% of the UK market....
factory was a famous landmark alongside the Aston Expressway which was demolished in the summer of 2007. The giant logo from the top of the tower is now in the collection of the Museum.

BM&AG also has many branch museums (some closed in the Winter) in historic buildings:
The Museum of Science and Industry, on Newhall Street
Newhall Street
Newhall Street is a street located in Birmingham, England.Newhall Street stretches from Colmore Row in the city centre by St Phillip's Cathedral in a north-westerly direction towards the Jewellery Quarter. Originally the road was the driveway to New Hall occupied by the Colmore family...
from 1951–1997, has now closed. Many exhibits were moved to Thinktank
Thinktank, Birmingham
Thinktank is a science museum in Birmingham, England. Opened in 2001, it succeeded and has several exhibits from the City's Museum of Science and Industry. It is part of the Millennium Point complex.-Building:...
, Birmingham science museum, which is operated by the independent Thinktank Trust.

The Museums Collections Centre in Nechells has brought together 80 per cent of Birmingham Museum & Art Gallery’s stored collections under one roof. The 1.5 hectares (3.7 acre) site, close to Duddeston Station, holds hundreds of thousands of objects. At the moment the Museums Collection Centre is only open to the public on open days or by appointment.