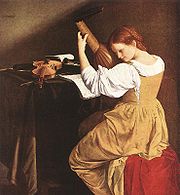 Orazio Lomi Gentileschi (1563–1639) was an Italian
Italy
Italy , officially the Italian Republic languages]] under the European Charter for Regional or Minority Languages. In each of these, Italy's official name is as follows:;;;;;;;;), is a unitary parliamentary republic in South-Central Europe. To the north it borders France, Switzerland, Austria and...
Baroque painter, one of more important painters influenced by Caravaggio (the so-called Caravaggisti
Caravaggisti
The Caravaggisti were stylistic followers of the 16th century Italian Baroque painter Michelangelo Merisi da Caravaggio. His influence on the new Baroque style that eventually emerged from Mannerism was profound. Caravaggio never established a workshop as most other painters did, and thus had no...
). He was the father of the painter Artemisia Gentileschi
Artemisia Gentileschi
Artemisia Gentileschi was an Italian Early Baroque painter, today considered one of the most accomplished painters in the generation influenced by Caravaggio...
.

In the late 1570s or early 1580s Gentileschi moved to Rome
Rome
Rome is the capital of Italy and the country's largest and most populated city and comune, with over 2.7 million residents in . The city is located in the central-western portion of the Italian Peninsula, on the Tiber River within the Lazio region of Italy.Rome's history spans two and a half...
, and was associated with the landscape-painter Agostino Tassi
Agostino Tassi
Agostino Tassi was an Italian painter, mostly of landscapes and seascapes, who is now best known as the rapist of Artemisia Gentileschi....
, executing the figures for the landscape backgrounds of this artist in the Palazzo Rospigliosi, and it is said in the great hall of the Quirinal Palace
Quirinal Palace
The Quirinal Palace is a historical building in Rome, Italy, the current official residence of the President of the Italian Republic. It is located on the Quirinal Hill, the tallest of the seven hills of Rome...
, although by some authorities the figures in the last-named building are ascribed to Giovanni Lanfranco
Giovanni Lanfranco
Giovanni Lanfranco was an Italian painter of the Baroque period.-Biography:Giovanni Gaspare Lanfranco was born in Parma, the third son of Stefano and Cornelia Lanfranchi, and was placed as a page in the household of Count Orazio Scotti...
. He worked also in the churches of Santa Maria Maggiore, San Nicola in Carcere
San Nicola in Carcere
San Nicola in Carcere is a titular church in Rome near the Forum Boarium in rione Ripa. It is one of the traditional stational churches of Lent.-History:...
, Santa Maria della Pace
Santa Maria della Pace
Santa Maria della Pace is a church in Rome, central Italy, not far from Piazza Navona.The current building was built on the foundations of the pre-existing church of Sant'Andrea de Aquarizariis in 1482, commissioned by Pope Sixtus IV. The church was rededicated to the Virgin Mary to remember a...
and San Giovanni in Laterano.

However, Gentileschi's main influence starting from the early 17th century was Caravaggio
Caravaggio
Michelangelo Merisi da Caravaggio was an Italian artist active in Rome, Naples, Malta, and Sicily between 1593 and 1610. His paintings, which combine a realistic observation of the human state, both physical and emotional, with a dramatic use of lighting, had a formative influence on the Baroque...
, also in Rome at the time, whose style he was one of the best followers of. Sharing with the former shadowy characteristics, he took part in several adventures in Rome's streets. In late August of 1603 Giovanni Baglione
Giovanni Baglione
Giovanni Baglione was an Italian Late Mannerist and Early Baroque painter and art historian. He is best remembered for his acrimonious involvement with the artist Caravaggio and his writings concerning the other Roman artists of his time.-Early life:A pupil of Francesco Morelli, he worked mainly...
filed a suit for libel against Caravaggio, Gentileschi, Ottavio Leoni
Ottavio Leoni
Ottavio Leoni was an Italian painter and printmaker of the early-Baroque, active mainly in Rome.He was born in Rome, where he first trained with his father, Lodovico Leoni. He painted altarpieces for churches in Rome such as an Annunciation for Sant'Eustachio and a Virgin and child with St...
, and Filipo Trisegni in connection with some unflattering poems circulated amongst the artistic community of Rome over the preceding summer. Caravaggios testimony during the trial as recorded in court documents is one of the few insights into his thoughts about the subject of art and his contemporaries. In 1612 he was again called to the Tribunal of Rome, this time to speak against Tassi, who was charged with the rape of his daughter Artemisia Gentileschi
Artemisia Gentileschi
Artemisia Gentileschi was an Italian Early Baroque painter, today considered one of the most accomplished painters in the generation influenced by Caravaggio...
. After Caravaggio's flight from Rome, Gentileschi developed a more personal Tuscan lyricism, characterized by lighter colours and precision in detail, reminiscent of his Mannerist beginnings. After a long sojourn in the Marche, in the early 1620s Gentileschi went to Genoa
Genoa
Genoa |Ligurian]] Zena ; Latin and, archaically, English Genua) is a city and an important seaport in northern Italy, the capital of the Province of Genoa and of the region of Liguria....
, and then to Paris
Paris
Paris is the capital and largest city in France, situated on the river Seine, in northern France, at the heart of the Île-de-France region...
, at the court of Marie de Medici. 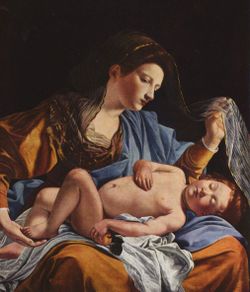 In 1626 he left France to work for Charles I of England
Charles I of England
Charles I was King of England, King of Scotland, and King of Ireland from 27 March 1625 until his execution in 1649. Charles engaged in a struggle for power with the Parliament of England, attempting to obtain royal revenue whilst Parliament sought to curb his Royal prerogative which Charles...
, where he remained for the rest of his life. His works became increasingly conventional and decorative, but were appreciated by the local aristocracy for their classicism. Van Dyck included him in his portraits of a hundred illustrious men.

Gentileschi died in 1639 in London
London
London is the capital city of :England and the :United Kingdom, the largest metropolitan area in the United Kingdom, and the largest urban zone in the European Union by most measures. Located on the River Thames, London has been a major settlement for two millennia, its history going back to its...
.

One of his main works in England was a series of ceiling paintings in Queen's House
Queen's House
The Queen's House, Greenwich, is a former royal residence built between 1614-1617 in Greenwich, then a few miles downriver from London, and now a district of the city. Its architect was Inigo Jones, for whom it was a crucial early commission, for Anne of Denmark, the queen of King James I of England...
, Greenwich
Greenwich
Greenwich is a district of south London, England, located in the London Borough of Greenwich.Greenwich is best known for its maritime history and for giving its name to the Greenwich Meridian and Greenwich Mean Time...
, which are now in Marlborough House
Marlborough House
Marlborough House is a mansion in Westminster, London, in Pall Mall just east of St James's Palace. It was built for Sarah Churchill, Duchess of Marlborough, the favourite and confidante of Queen Anne. The Duchess wanted her new house to be "strong, plain and convenient and good"...
, London.