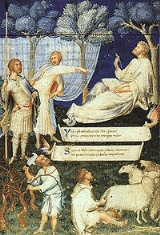 Encyclopedia
Simone Martini was an Italian
Italy
Italy , officially the Italian Republic languages]] under the European Charter for Regional or Minority Languages. In each of these, Italy's official name is as follows:;;;;;;;;), is a unitary parliamentary republic in South-Central Europe. To the north it borders France, Switzerland, Austria and...
painter born in Siena
Siena
Siena is a city in Tuscany, Italy. It is the capital of the province of Siena.The historic centre of Siena has been declared by UNESCO a World Heritage Site. It is one of the nation's most visited tourist attractions, with over 163,000 international arrivals in 2008...
.
He was a major figure in the development of early Italian painting and greatly influenced the development of the International Gothic
International Gothic
International Gothic is a phase of Gothic art which developed in Burgundy, Bohemia, France and northern Italy in the late 14th century and early 15th century...
style.

It is thought that Martini was a pupil of Duccio di Buoninsegna
Duccio
Duccio di Buoninsegna was one of the most influential Italian artists of his time. Born in Siena, Tuscany, he worked mostly with pigment and egg tempera and like most of his contemporaries painted religious subjects...
, the leading Sienese painter of his time. According to late Renaissance art biographer Giorgio Vasari
Giorgio Vasari
Giorgio Vasari was an Italian painter, writer, historian, and architect, who is famous today for his biographies of Italian artists, considered the ideological foundation of art-historical writing.-Biography:...
, Simone was instead a pupil of Giotto di Bondone, with whom he went to Rome to paint at old St. Peter's Basilica
St. Peter's Basilica
The Papal Basilica of Saint Peter , officially known in Italian as ' and commonly known as Saint Peter's Basilica, is a Late Renaissance church located within the Vatican City. Saint Peter's Basilica has the largest interior of any Christian church in the world...
, Giotto also executing a mosaic there. Martini's brother-in-law was the artist Lippo Memmi
Lippo Memmi
Lippo Memmi was an Italian painter from Siena. He was the foremost follower of Simone Martini, who was his brother-in-law....
. Very little documentation survives regarding Simone's life, and many attributions are debated by art historians.

Simone was doubtlessly apprenticed from an early age, as would have been the normal practice. Among his first documented works is the Maestà of 1315 in the Palazzo Pubblico
Palazzo Pubblico
The Palazzo Pubblico is a palace in Siena, Tuscany, central Italy. Construction began in 1297 and its original purpose was to house the republican government, consisting of the Podestà and Council of Nine....
in Siena
Siena
Siena is a city in Tuscany, Italy. It is the capital of the province of Siena.The historic centre of Siena has been declared by UNESCO a World Heritage Site. It is one of the nation's most visited tourist attractions, with over 163,000 international arrivals in 2008...
. A copy of the work, executed shortly thereafter by Lippo Memmi in San Gimignano
San Gimignano
San Gimignano is a small walled medieval hill town in the province of Siena, Tuscany, north-central Italy. It is mainly famous for its medieval architecture, especially its towers, which may be seen from several kilometres outside the town....
, testifies to the enduring influence Simone's prototypes would have on other artists throughout the 14th century. Perpetuating the Sienese tradition, Simone's style contrasted with the sobriety and monumentality of Florentine
Florence
Florence is the capital city of the Italian region of Tuscany and of the province of Florence. It is the most populous city in Tuscany, with approximately 370,000 inhabitants, expanding to over 1.5 million in the metropolitan area....
art, and is noted for its soft, stylized, decorative features, sinuosity of line, and courtly elegance. Simone's art owes much to French manuscript illumination
Illuminated manuscript
An illuminated manuscript is a manuscript in which the text is supplemented by the addition of decoration, such as decorated initials, borders and miniature illustrations...
and ivory carving: examples of such art were brought to Siena in the fourteenth century by means of the Via Francigena
Via Francigena
The Via Francigena is an ancient road between Rome and Canterbury, passing through England, France, Switzerland and Italy. In mediaeval times it was an important road and pilgrimage route...
, a main pilgrimage and trade route from Northern Europe to Rome.

Simone's other major works include the St. Louis of Toulouse Crowning the King at the Museo di Capodimonte
Museo di Capodimonte
The National Museum of Capodimonte is located in the Palace of Capodimonte, a grand Bourbon palazzo in Naples, Italy. The museum is the prime repository of Neapolitan painting and decorative art, with several important works from other Italian schools of painting, and some important Ancient Roman...
in Naples (1317), the Saint Catherine of Alexandria Polyptych
Saint Catherine of Alexandria Polyptych
The Saint Catherine of Alexandria Polyptych is a painting by the Italian medieval artist Simone Martini, dating to 1320...
in Pisa
Pisa
Pisa is a city in Tuscany, Central Italy, on the right bank of the mouth of the River Arno on the Tyrrhenian Sea. It is the capital city of the Province of Pisa...
(1319) and the Annunciation with St. Margaret and St. Ansanus at the Uffizi
Uffizi
The Uffizi Gallery , is a museum in Florence, Italy. It is one of the oldest and most famous art museums of the Western world.-History:...
in Florence
Florence
Florence is the capital city of the Italian region of Tuscany and of the province of Florence. It is the most populous city in Tuscany, with approximately 370,000 inhabitants, expanding to over 1.5 million in the metropolitan area....
(1333), as well as frescoes in the San Martino Chapel in the lower church of the Basilica of San Francesco d'Assisi
Basilica of San Francesco d'Assisi
The Papal Basilica of St. Francis of Assisi is the mother church of the Roman Catholic Order of Friars Minor—commonly known as the Franciscan Order—in Assisi, Italy, the city where St. Francis was born and died. The basilica is one of the most important places of Christian pilgrimage in Italy...
. Francis Petrarch
Petrarch
Francesco Petrarca , known in English as Petrarch, was an Italian scholar, poet and one of the earliest humanists. Petrarch is often called the "Father of Humanism"...
became a friend of Simone's while in Avignon, and two of Petrarch's sonnets make reference to a portrait of Laura de Noves
Laura de Noves
Laura de Noves was the wife of Count Hugues de Sade . She could be the Laura that the Humanist poet Francesco Petrarch wrote about extensively; however, she has never been positively identified as such. Laura had a great influence on Petrarch's life and lyrics...
that Simone supposedly painted for the poet (according to Vasari).

A Christ Discovered in the Temple (1342) is in the collections of Liverpool's Walker Art Gallery.

Simone Martini died while in the service of the Papal court
Avignon Papacy
The Avignon Papacy was the period from 1309 to 1376 during which seven Popes resided in Avignon, in modern-day France. This arose from the conflict between the Papacy and the French crown....
at Avignon
Avignon
Avignon is a French commune in southeastern France in the départment of the Vaucluse bordered by the left bank of the Rhône river. Of the 94,787 inhabitants of the city on 1 January 2010, 12 000 live in the ancient town centre surrounded by its medieval ramparts.Often referred to as the...
in 1344.