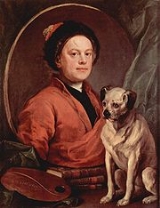 Overview
William Hogarth was an English painter
Painting
Painting is the practice of applying paint, pigment, color or other medium to a surface . The application of the medium is commonly applied to the base with a brush but other objects can be used. In art, the term painting describes both the act and the result of the action. However, painting is...
, printmaker
Printmaking
Printmaking is the process of making artworks by printing, normally on paper. Printmaking normally covers only the process of creating prints with an element of originality, rather than just being a photographic reproduction of a painting. Except in the case of monotyping, the process is capable...
, pictorial satirist
Satire
Satire is primarily a literary genre or form, although in practice it can also be found in the graphic and performing arts. In satire, vices, follies, abuses, and shortcomings are held up to ridicule, ideally with the intent of shaming individuals, and society itself, into improvement...
, social critic
Social criticism
The term social criticism locates the reasons for malicious conditions of the society in flawed social structures. People adhering to a social critics aim at practical solutions by specific measures, often consensual reform but sometimes also by powerful revolution.- European roots :Religious...
and editorial cartoonist
Cartoonist
A cartoonist is a person who specializes in drawing cartoons. This work is usually humorous, mainly created for entertainment, political commentary or advertising...
who has been credited with pioneering western sequential art
Sequential art
Sequential art refers to the art form of using a train of images deployed in sequence to graphic storytelling or convey information. The best-known example of sequential art is comics, which are a printed arrangement of art and balloons, especially comic books and comic strips.The term is rarely...
. His work ranged from realistic
Realism (visual arts)
Realism in the visual arts is a style that depicts the actuality of what the eyes can see. The term is used in different senses in art history; it may mean the same as illusionism, the representation of subjects with visual mimesis or verisimilitude, or may mean an emphasis on the actuality of...
portraiture to comic strip
Comic strip
A comic strip is a sequence of drawings arranged in interrelated panels to display brief humor or form a narrative, often serialized, with text in balloons and captions....
-like series of pictures called "modern moral subjects". Knowledge of his work is so pervasive that satirical political illustrations in this style are often referred to as "Hogarthian."
William Hogarth was born at Bartholomew Close in London to Richard Hogarth, a poor Latin
Latin
Latin is an Italic language originally spoken in Latium and Ancient Rome. It, along with most European languages, is a descendant of the ancient Proto-Indo-European language. Although it is considered a dead language, a number of scholars and members of the Christian clergy speak it fluently, and...
school teacher and textbook writer, and Anne Gibbons.

Is william hogarth a cartoonist
More

I turned my thoughts to a still more novel mode..to compose pictures on canvas similar to representations on the stage...my picture is my stage,and men and women my players exhibited in a 'dumb' show.