Encyclopedia
Birch bark or birchbark is the bark
Bark
Bark is the outermost layers of stems and roots of woody plants. Plants with bark include trees, woody vines and shrubs. Bark refers to all the tissues outside of the vascular cambium and is a nontechnical term. It overlays the wood and consists of the inner bark and the outer bark. The inner...
of several Eurasian and North American birch
Birch
Birch is a tree or shrub of the genus Betula , in the family Betulaceae, closely related to the beech/oak family, Fagaceae. The Betula genus contains 30–60 known taxa...
trees of the genus Betula.

The strong and water-resistant cardboard-like bark can be easily cut, bent, and sewn, which made it a valuable building, crafting, and writing material
Writing material
Writing material refers to the materials that provide the surfaces on which humans use writing instruments to inscribe writings. The same materials can also be used for symbolic or representational drawings. Building material on which writings or drawings are produced are not included...
, since pre-historic
Prehistory
Prehistory is the span of time before recorded history. Prehistory can refer to the period of human existence before the availability of those written records with which recorded history begins. More broadly, it refers to all the time preceding human existence and the invention of writing...
times. Even today birch bark remains a popular type of wood for various handicraft
Handicraft
Handicraft, more precisely expressed as artisanic handicraft, sometimes also called artisanry, is a type of work where useful and decorative devices are made completely by hand or by using only simple tools. It is a traditional main sector of craft. Usually the term is applied to traditional means...
s and arts.

Birch bark also contains substances of medicinal and chemical interest. Some of those products (such as betulin
Betulin
Betulin is an abundant naturally occurring triterpene. It is commonly isolated from the bark of birch trees and forms up to 30% of the dry weight of the extractive . The purpose of the compound in the bark is not known...
) also have fungicidal properties that help preserve bark artifacts, as well as food preserved in bark containers.

Birch bark can be removed fairly easily from the trunk or branches, living or recently dead, by cutting a slit lengthwise through the bark and pulling or prying it away from the wood. The best time for collection is spring or early summer, as the bark is of better quality and most easily removed.

Removing the outer (light) layer of bark from the trunk of a living tree may not kill it, but probably weakens it and makes it more prone to infection
Infection
An infection is the colonization of a host organism by parasite species. Infecting parasites seek to use the host's resources to reproduce, often resulting in disease...
s. Removal of the inner (dark) layer, the phloem
Phloem
In vascular plants, phloem is the living tissue that carries organic nutrients , in particular, glucose, a sugar, to all parts of the plant where needed. In trees, the phloem is the innermost layer of the bark, hence the name, derived from the Greek word "bark"...
, kills the tree by preventing the flow of sap
Sap
Sap may refer to:* Plant sap, the fluid transported in xylem cells or phloem sieve tube elements of a plant* Sap , a village in the Dunajská Streda District of Slovakia...
to the root
Root
In vascular plants, the root is the organ of a plant that typically lies below the surface of the soil. This is not always the case, however, since a root can also be aerial or aerating . Furthermore, a stem normally occurring below ground is not exceptional either...
s.

To prevent it from rolling up during storage, the bark should be spread open and kept pressed flat.

Birch bark can be cut with a sharp knife
Knife
A knife is a cutting tool with an exposed cutting edge or blade, hand-held or otherwise, with or without a handle. Knives were used at least two-and-a-half million years ago, as evidenced by the Oldowan tools...
, and worked like cardboard. For sharp bending, the fold should be scored (scratched) first with a blunt stylus
Stylus
A stylus is a writing utensil, or a small tool for some other form of marking or shaping, for example in pottery. The word is also used for a computer accessory . It usually refers to a narrow elongated staff, similar to a modern ballpoint pen. Many styli are heavily curved to be held more easily...
.

Fresh bark can be worked as is; bark that has dried up (before or after collection) should be softened by steaming, by soaking in warm water, or over a fire. 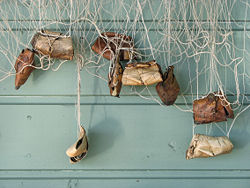 Birch bark was a valuable construction material in any part of the world where birch trees were available. Containers like wrappings, bags, baskets, box
Box
Box describes a variety of containers and receptacles for permanent use as storage, or for temporary use often for transporting contents. The word derives from the Greek πύξος , "box, boxwood"....
es, or quiver
Quiver
A quiver is a container for arrows. Quivers have been traditionally made of leather, bark, wood, furs and other natural materials; modern quivers are often made of metal and plastic....
s were made by most societies well before pottery
Pottery
Pottery is the material from which the potteryware is made, of which major types include earthenware, stoneware and porcelain. The place where such wares are made is also called a pottery . Pottery also refers to the art or craft of the potter or the manufacture of pottery...
was invented. Other uses include:

Birch bark also makes an outstanding tinder
Tinder
Tinder is easily combustible material used to ignite fires by rudimentary methods. A small fire consisting of tinder is then used to ignite kindling. Anything that can be ignited by a match can be considered tinder; or by more rigorous definition, anything that begins to glow under a shower of...
, as the inner layers will stay dry even through heavy rainstorms. To render birch bark useless as tinder, it must be soaked for an extended period of time.