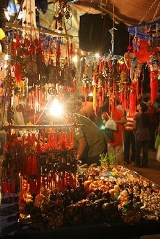 Overview
Handicraft, more precisely expressed as artisanic handicraft, sometimes also called artisanry, is a type of work where useful and decorative devices are made completely by hand or by using only simple tools. It is a traditional main sector of craft
Craft
A craft is a branch of a profession that requires some particular kind of skilled work. In historical sense, particularly as pertinent to the Medieval history and earlier, the term is usually applied towards people occupied in small-scale production of goods.-Development from the past until...
. Usually the term is applied to traditional means of making goods. The individual artisan
Artisan
An artisan is a skilled manual worker who makes items that may be functional or strictly decorative, including furniture, clothing, jewellery, household items, and tools...
ship of the items is a paramount criterion, such items often have cultural and/or religious significance.

Hi, i need to design my mug and a wooden plate with broken pieces of glass, how can i do that??
More

Handicraft, more precisely expressed as artisanic handicraft, sometimes also called artisanry, is a type of work where useful and decorative devices are made completely by hand or by using only simple tools. It is a traditional main sector of craft
Craft
A craft is a branch of a profession that requires some particular kind of skilled work. In historical sense, particularly as pertinent to the Medieval history and earlier, the term is usually applied towards people occupied in small-scale production of goods.-Development from the past until...
. Usually the term is applied to traditional means of making goods. The individual artisan
Artisan
An artisan is a skilled manual worker who makes items that may be functional or strictly decorative, including furniture, clothing, jewellery, household items, and tools...
ship of the items is a paramount criterion, such items often have cultural and/or religious significance. Items made by mass production
Mass production
Mass production is the production of large amounts of standardized products, including and especially on assembly lines...
or machines are not handicraft goods.

Usually, what distinguishes the term handicraft from the frequently used category arts and crafts
Arts and crafts
Arts and crafts comprise a whole host of activities and hobbies that are related to making things with one's hands and skill. These can be sub-divided into handicrafts or "traditional crafts" and "the rest"...
is a matter of intent: handicraft items are intended to be used, worn, etc., having a purpose beyond simple decoration. Handicraft goods are generally considered more traditional work, in traditional non-industrial and transitional societies created as a somewhat more necessary part of daily life (in comparison to industrial societies), while arts and crafts implies more of a hobby
Hobby
A hobby is a regular activity or interest that is undertaken for pleasure, typically done during one's leisure time.- Etymology :A hobby horse is a wooden or wickerwork toy made to be ridden just like a real horse...
pursuit and a demonstration/perfection of a creative technique. In Britain in the late nineteenth century, however, the Arts and Crafts Movement
Arts and Crafts movement
Arts and Crafts was an international design philosophy that originated in England and flourished between 1860 and 1910 , continuing its influence until the 1930s...
was not a matter of hobbies, but of creating useful as well as creative work for people, using natural materials and traditional techniques. In practical terms, the categories have a great deal of overlap.


Handicrafts in the Indian subcontinent

The history of handicrafts in areas generally now comprising India
India
India , officially the Republic of India , is a country in South Asia. It is the seventh-largest country by geographical area, the second-most populous country with over 1.2 billion people, and the most populous democracy in the world...
and Pakistan
Pakistan
Pakistan , officially the Islamic Republic of Pakistan is a sovereign state in South Asia. It has a coastline along the Arabian Sea and the Gulf of Oman in the south and is bordered by Afghanistan and Iran in the west, India in the east and China in the far northeast. In the north, Tajikistan...
is an old saga. To peep in to the traces of Indian handicrafts we need to go back almost 5000 years. The first references to handicrafts in the Indian subcontinent
Indian subcontinent
The Indian subcontinent, also Indian Subcontinent, Indo-Pak Subcontinent or South Asian Subcontinent is a region of the Asian continent on the Indian tectonic plate from the Hindu Kush or Hindu Koh, Himalayas and including the Kuen Lun and Karakoram ranges, forming a land mass which extends...
can be found from the Moen jo Daro, Sindh Indus Valley Civilization
Indus Valley Civilization
The Indus Valley Civilization was a Bronze Age civilization that was located in the northwestern region of the Indian subcontinent, consisting of what is now mainly modern-day Pakistan and northwest India...
(3000 BC-1700 BC). The craft tradition in India has revolved around religious beliefs, local needs of the commoners, as well as the special needs of the patrons and royalty, along with an eye for foreign and domestic trade. These craft traditions have withstood the ravages of time and numerous foreign invasions and continue to flourish till date owing to the assimilative nature of Indian culture and broadmindedness of the handicraftsmen to accept and use new ideas.Therefore the handicrafts are a mark of golden history of our country.

The Indus valley civilization had a rich craft tradition as well as a high degree of technical excellence in the field of pottery making, sculpture (metal, stone and terracotta), jewelry, weaving, etc. A lot of material information from excavations at Harappa
Harappa
Harappa is an archaeological site in Punjab, northeast Pakistan, about west of Sahiwal. The site takes its name from a modern village located near the former course of the Ravi River. The current village of Harappa is from the ancient site. Although modern Harappa has a train station left from...
, Mohen-jo-daro, etc. substantiate the craft tradition of the Indus valley civilization. The craftsmen not only catered to all the local needs but surplus items were sent to ancient Arabian cultures via ancient sea routes.

Handicraft is the art of creating products using raw and indigenous materials. It develops the skills and creative interests of students towards a particular craft or trade. The basic training provided in a specific craft prepares the students to become competent craftsmen and artists who can contribute to the establishment of cottage industries, thus contributing to the economic growth of the country.

The concept of state was ushered by the rise of the Mauryan Empire in the 3rd century BC. It is said that during the time of Ashoka, 84,000 stupas were built in India, including the world famous Sanchi Stupa, which has beautiful stone carving and relief work done on it. Numerous sculptures from Bharhut, Mathura, Amravati, Vaishali, Sanchi, etc. show female figures adorned with an array of jewelry, which continues to inspire contemporary jewelry making. The iron pillars of Vaishali (Bihar) and Delhi, created during the time of Emperor Ashoka, are a marvel in the field of metallurgy.

The period between the 1st century BC and the 1st century AD was a period of political turmoil as a result of foreign invasions from central Asia. The impact of these intrusions can be seen in the Buddhist sculptures from Taxila, Begram, Bamiyan, Swat valley, etc. (all from the present day Pakistani North West Frontier province) which show a high degree of Greek influence. The depiction of Buddha, having curly hair and wearing draperies, until date is the result of this Greek influence. The sculpture of the Kushan king Kanishka from this period depicting him wearing leather boots and a heavy warm coat amply reflects the influence of the central Asian Culture on Indian craftsmanship. Jewelry, sculpture, textile making, leather products, metal working, etc. were the main handicrafts that inherited these foreign influences and assimilated them in accordance with the Indian milieu.

The Gupta (AD 320-647) age is referred to as the classical period in Indian history. The points in the field of craft include the rock cut temples of Ellora and the Ajanta murals. These murals give us a realistic view of the lifestyle of that time. The craftsmen of this period, under royal patronage excelled in jewelry making, woodcarving, sculpture, stone carving and weaving.

The Medieval period of Indian history in the context of handicrafts showed a marked shift from north India to the Deccan and southern parts of the country, though the handicraftsmen under the Delhi Sultanate period flourished in the field of pottery, weaving, wood carving, metal working, jewelry, etc. The contribution of the Cholas and the Vijaynagar Empire in the field of bronze sculpture, silk weaving, jewelry, temple carving is beyond parallel. The fine example of stone carving from central India can be seen in the form of the Khajuraho Temples, built by the Chandelas. Rich and ornate wood and stone carving can be found in medieval temple of Jagannath at Puri in Orissa.