Encyclopedia
The Beckmann rearrangement, named after the German chemist Ernst Otto Beckmann
Ernst Otto Beckmann
Ernst Otto Beckmann was a German chemist who is remembered for his invention of the Beckmann differential thermometer and for his discovery of the Beckmann rearrangement.-Scientific work:...
(1853–1923), is an acid-catalyzed
Acid catalysis
In acid catalysis and base catalysis a chemical reaction is catalyzed by an acid or a base. The acid is often the proton and the base is often a hydroxyl ion. Typical reactions catalyzed by proton transfer are esterfications and aldol reactions. In these reactions the conjugate acid of the carbonyl...
rearrangement
Rearrangement reaction
A rearrangement reaction is a broad class of organic reactions where the carbon skeleton of a molecule is rearranged to give a structural isomer of the original molecule. Often a substituent moves from one atom to another atom in the same molecule...
of an oxime
Oxime
An oxime is a chemical compound belonging to the imines, with the general formula R1R2C=NOH, where R1 is an organic side chain and R2 may be hydrogen, forming an aldoxime, or another organic group, forming a ketoxime. O-substituted oximes form a closely related family of compounds...
to an amide
Amide
In chemistry, an amide is an organic compound that contains the functional group consisting of a carbonyl group linked to a nitrogen atom . The term refers both to a class of compounds and a functional group within those compounds. The term amide also refers to deprotonated form of ammonia or an...
. Cyclic oximes yield lactam
Lactam
A lactam is a cyclic amide. Prefixes indicate how many carbon atoms are present in the ring: β-lactam , γ-lactam , δ-lactam...
s.

This example reaction starting with cyclohexanone
Cyclohexanone
Cyclohexanone is the organic compound with the formula 5CO. The molecule consists of six-carbon cyclic molecule with a ketone functional group. This colorless oil has an odor reminiscent of peardrop sweets as well as acetone. Over time, samples assume a yellow color due to oxidation...
, forming the reaction intermediate
Reaction intermediate
A reaction intermediate or an intermediate is a molecular entity that is formed from the reactants and reacts further to give the directly observed products of a chemical reaction. Most chemical reactions are stepwise, that is they take more than one elementary step to complete...
cyclohexanonoxime (in the image, the ending 'ono' in the name is missing) and resulting in caprolactam
Caprolactam
Caprolactam is an organic compound with the formula 5CNH. This colourless solid is a lactam or a cyclic amide of caproic acid. Approximately 2 billion kilograms are produced annually...
is one of the most important applications of the Beckmann rearrangement, as caprolactam is the feedstock in the production of Nylon 6
Nylon 6
Nylon 6 or polycaprolactam is a polymer developed by Paul Schlack at IG Farben to reproduce the properties of nylon 6,6 without violating the patent on its production. Unlike most other nylons, nylon 6 is not a condensation polymer, but instead is formed by ring-opening polymerization. This makes...
.

The reaction mechanism
Reaction mechanism
In chemistry, a reaction mechanism is the step by step sequence of elementary reactions by which overall chemical change occurs.Although only the net chemical change is directly observable for most chemical reactions, experiments can often be designed that suggest the possible sequence of steps in...
of the Beckmann rearrangement is in general believed to consist of an alkyl migration with expulsion of the hydroxyl group to form a nitrilium ion followed by hydrolysis
Hydrolysis
Hydrolysis is a chemical reaction during which molecules of water are split into hydrogen cations and hydroxide anions in the process of a chemical mechanism. It is the type of reaction that is used to break down certain polymers, especially those made by condensation polymerization...
:


In one study, the mechanism is established in silico
In silico
In silico is an expression used to mean "performed on computer or via computer simulation." The phrase was coined in 1989 as an analogy to the Latin phrases in vivo and in vitro which are commonly used in biology and refer to experiments done in living organisms and outside of living organisms,...
taking into account ce of solvent
Solvent
A solvent is a liquid, solid, or gas that dissolves another solid, liquid, or gaseous solute, resulting in a solution that is soluble in a certain volume of solvent at a specified temperature...
molecules and substituents. The rearrangement of acetone oxime in the Beckmann solution involves three acetic acid molecules and one proton (present as an oxonium ion
Oxonium ion
The oxonium ion in chemistry is any oxygen cation with three bonds. The simplest oxonium ion is the hydronium ion H3O+. Another oxonium ion frequently encountered in organic chemistry is obtained by protonation or alkylation of a carbonyl group e.g...
). In the transition state
Transition state
The transition state of a chemical reaction is a particular configuration along the reaction coordinate. It is defined as the state corresponding to the highest energy along this reaction coordinate. At this point, assuming a perfectly irreversible reaction, colliding reactant molecules will always...
leading to the iminium ion (σ-complex), the methyl group migrates to the nitrogen atom in a concerted reaction
Concerted reaction
In chemistry, a concerted reaction is a chemical reaction in which all bond breaking and bond making occurs in a single step. Reactive intermediates or other unstable high energy intermediates are not involved. Concerted reaction rates tend not to depend on solvent polarity ruling out large buildup...
and the hydroxyl group is expulsed. The oxygen atom in the hydroxyl group is stabilized by the three acetic acid molecules. In the next step the electrophilic carbon atom in the nitrilium ion is attacked by water and the proton is donated back to acetic acid. In the transition state leading to the N-methyl acetimidic acid, the water oxygen atom is coordinated to 4 other atoms. In the third step, an isomerization step protonates the nitrogen atom leading to the amide
Amide
In chemistry, an amide is an organic compound that contains the functional group consisting of a carbonyl group linked to a nitrogen atom . The term refers both to a class of compounds and a functional group within those compounds. The term amide also refers to deprotonated form of ammonia or an...
. 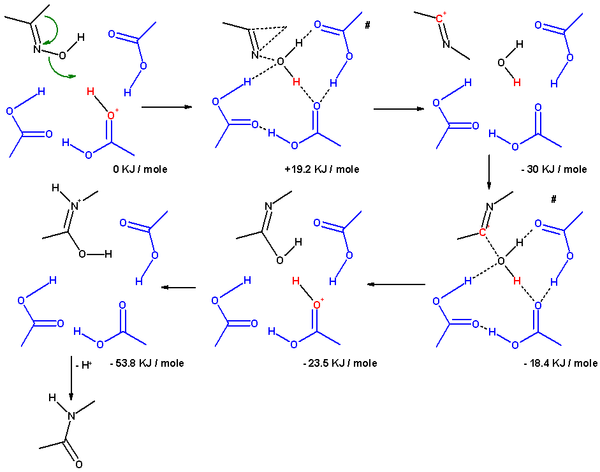 The same computation with a hydroxonium ion and 6 molecules of water has the same result, but, when the migrating substituent is phenyl in the reaction of acetophenone oxime with protonated acetic acid, the mechanism favors the formation of an intermediate three-membered π-complex. This π-complex is again not found in the H3O+(H2O)6. 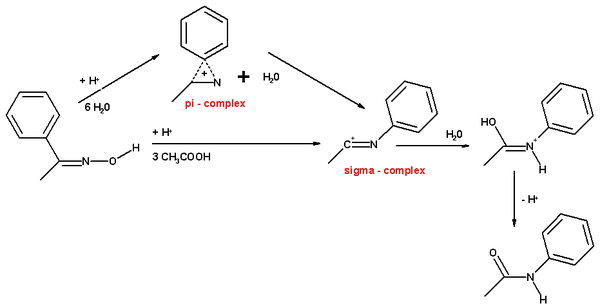 With the cyclohexanone-oxime, the relief of ring strain
Ring strain
In organic chemistry, ring strain is the tendency of a cyclic molecule, such as cyclopropane, to destabilize when its atoms are in non-favorable high energy spatial orientations...
results in a third reaction mechanism, leading directly to the protonated caprolactam in a single concerted step without the intermediate formation of a π-complex or σ-complex.

Beckmann reaction is known to be catalyzed by cyanuric chloride
Cyanuric chloride
Cyanuric chloride is the inorganic compound with the formula 3. This colorless solid is the chlorinated derivative of 1,3,5-triazine. It is the trimer of cyanogen chloride...
and zinc chloride
Zinc chloride
Zinc chloride is the name of chemical compound with the formula ZnCl2 and its hydrates. Zinc chlorides, of which nine crystalline forms are known, are colorless or white, and are highly soluble in water. ZnCl2 itself is hygroscopic and even deliquescent. Samples should therefore be protected from...
co-catalyst. For example, cyclododecanone can be converted to the corresponding lactam
Lactam
A lactam is a cyclic amide. Prefixes indicate how many carbon atoms are present in the ring: β-lactam , γ-lactam , δ-lactam...
, a monomer
Monomer
A monomer is an atom or a small molecule that may bind chemically to other monomers to form a polymer; the term "monomeric protein" may also be used to describe one of the proteins making up a multiprotein complex...
for the production of nylon 12.
The reaction mechanism
Reaction mechanism
In chemistry, a reaction mechanism is the step by step sequence of elementary reactions by which overall chemical change occurs.Although only the net chemical change is directly observable for most chemical reactions, experiments can often be designed that suggest the possible sequence of steps in...
for this reaction is based on a catalytic cycle
Catalytic cycle
A catalytic cycle in chemistry is a term for a multistep reaction mechanism that involves a catalyst . The catalytic cycle is the main method for describing the role of catalysts in biochemistry, organometallic chemistry, materials science, etc. Often such cycles show the conversion of a...
with cyanuric chloride activating the hydroxyl
Hydroxyl
A hydroxyl is a chemical group containing an oxygen atom covalently bonded with a hydrogen atom. In inorganic chemistry, the hydroxyl group is known as the hydroxide ion, and scientists and reference works generally use these different terms though they refer to the same chemical structure in...
group via a nucleophilic aromatic substitution
Nucleophilic aromatic substitution
right|300px|Aromatic nucleophilic substitutionA nucleophilic aromatic substitution is a substitution reaction in organic chemistry in which the nucleophile displaces a good leaving group, such as a halide, on an aromatic ring...
. The reaction product is dislodged and replaced by new reactant via an intermediate Meisenheimer complex
Meisenheimer complex
A Meisenheimer complex or Jackson-Meisenheimer complex in organic chemistry is a 1:1 reaction adduct between an arene carrying electron withdrawing groups and nucleophile...
.

When the oxime has a quaternary carbon atom in an anti position to the hydroxyl group a fragmentation occurs forming a nitrile
Nitrile
A nitrile is any organic compound that has a -C≡N functional group. The prefix cyano- is used interchangeably with the term nitrile in industrial literature. Nitriles are found in many useful compounds, one example being super glue .Inorganic compounds containing the -C≡N group are not called...
:

The fluorine donor in this fragmentation reaction is diethylaminosulfur trifluoride (DAST) :

The oxime of cyclohexenone
Cyclohexenone
Cyclohexenone is an organic compound which is a versatile intermediate used in the synthesis of a variety of chemical products such as pharmaceuticals and fragrances...
with acid forms aniline
Aniline
Aniline, phenylamine or aminobenzene is an organic compound with the formula C6H5NH2. Consisting of a phenyl group attached to an amino group, aniline is the prototypical aromatic amine. Being a precursor to many industrial chemicals, its main use is in the manufacture of precursors to polyurethane...
in a dehydration - aromatization reaction called the Semmler-Wolff reaction or Wolff aromatization