Encyclopedia
A rearrangement reaction is a broad class of organic reaction
Organic reaction
Organic reactions are chemical reactions involving organic compounds. The basic organic chemistry reaction types are addition reactions, elimination reactions, substitution reactions, pericyclic reactions, rearrangement reactions, photochemical reactions and redox reactions. In organic synthesis,...
s where the carbon skeleton of a molecule
Molecule
A molecule is an electrically neutral group of at least two atoms held together by covalent chemical bonds. Molecules are distinguished from ions by their electrical charge...
is rearranged to give a structural isomer of the original molecule. Often a substituent
Substituent
In organic chemistry and biochemistry, a substituent is an atom or group of atoms substituted in place of a hydrogen atom on the parent chain of a hydrocarbon...
moves from one atom to another atom in the same molecule. In the example below the substituent R moves from carbon atom 1 to carbon atom 2:

Three key rearrangement reactions are 1,2-rearrangement
1,2-rearrangement
A 1,2-rearrangement or 1,2-migration or 1,2-shift or Whitmore 1,2-shift is an organic reaction where a substituent moves from one atom to another atom in a chemical compound. In a 1,2 shift the movement involves two adjacent atoms but moves over larger distances are possible...
s, pericyclic reactions and olefin metathesis
Olefin metathesis
Olefin metathesis or transalkylidenation is an organic reaction that entails redistribution of alkylene fragments by the scission of carbon - carbon double bonds in olefins . Its advantages include the creation of fewer sideproducts and hazardous wastes. Yves Chauvin, Robert H. Grubbs, and Richard R...
.

A pericyclic reaction is a type of reaction with multiple carbon-carbon bond making and breaking wherein the transition state of the molecule has a cyclic geometry, and the reaction progresses in a concerted fashion. Examples are hydride shifts 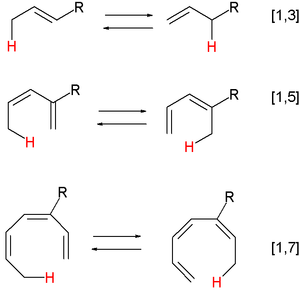