Encyclopedia
A Meisenheimer complex or Jackson-Meisenheimer complex in organic chemistry
Organic chemistry
Organic chemistry is a subdiscipline within chemistry involving the scientific study of the structure, properties, composition, reactions, and preparation of carbon-based compounds, hydrocarbons, and their derivatives...
is a 1:1 reaction adduct
Adduct
An adduct is a product of a direct addition of two or more distinct molecules, resulting in a single reaction product containing all atoms of all components. The resultant is considered a distinct molecular species...
between an arene carrying electron withdrawing groups and nucleophile
Nucleophile
A nucleophile is a species that donates an electron-pair to an electrophile to form a chemical bond in a reaction. All molecules or ions with a free pair of electrons can act as nucleophiles. Because nucleophiles donate electrons, they are by definition Lewis bases.Nucleophilic describes the...
. These complexes are found as reactive intermediate
Reactive intermediate
In chemistry a reactive intermediate is a short-lived, high energy, highly reactive molecule. When generated in a chemical reaction it will quickly convert into a more stable molecule. Only in exceptional cases can these compounds be isolated and stored, e.g. low temperatures, matrix isolation...
s in nucleophilic aromatic substitution
Nucleophilic aromatic substitution
right|300px|Aromatic nucleophilic substitutionA nucleophilic aromatic substitution is a substitution reaction in organic chemistry in which the nucleophile displaces a good leaving group, such as a halide, on an aromatic ring...
but stable and isolated Meisenheimer salts are also known.

The early development of this type of complex takes place around the turn of the 19th century. In 1886 Janovski observed an intense violet color when he mixed meta-dinitrobenzene with an alcoholic solution of alkali. In 1895 Lobry de Bruyn
Cornelis Adriaan Lobry van Troostenburg de Bruyn
Cornelis Adriaan Lobry van Troostenburg de Bruyn was a chemist from the Netherlands.-Biography:De Bruyn was born on in Leeuwarden, where his father, Nicholaas Lobry van Troostenburg de Bruyn, was a physician in practice. The boy was in due time sent to the high school of the town , and...
investigated a red substance formed in the reaction of trinitrobenzene with potassium hydroxide
Potassium hydroxide
Potassium hydroxide is an inorganic compound with the formula KOH, commonly called caustic potash.Along with sodium hydroxide , this colorless solid is a prototypical strong base. It has many industrial and niche applications. Most applications exploit its reactivity toward acids and its corrosive...
in methanol
Methanol
Methanol, also known as methyl alcohol, wood alcohol, wood naphtha or wood spirits, is a chemical with the formula CH3OH . It is the simplest alcohol, and is a light, volatile, colorless, flammable liquid with a distinctive odor very similar to, but slightly sweeter than, ethanol...
. In 1900 Jackson and Gazzolo reacted trinitroanisole with sodium methoxide
Methoxide
Methoxides are organic salts and the simplest alkoxides. Sodium methoxide and potassium hydroxide have widespread use, though other variants such as lithium hydroxide, rubidium methoxide, caesium methoxide, and francium methoxide exist as well.- Methoxide ion :In organic chemistry, the methoxide...
and proposed a quinoid structure for the reaction product.

With three electron withdrawing groups, the negative charge in the complex is located at one of the nitro groups according to the quinoid model. When less electron poor arenes this charge is delocalized over the entire ring (structure to the right in scheme 1).

In one study a Meisenheimer arene (4,6-Dinitrobenzofuroxan) was allowed to react with a strongly electron-releasing arene (1,3,5-tris(N-pyrrolidinyl)benzene) forming a zwitterion
Zwitterion
In chemistry, a zwitterion is a neutral molecule with a positive and a negative electrical charge at different locations within that molecule. Zwitterions are sometimes also called inner salts.-Examples:...
ic Meisenheimer - Wheland complex. The Wheland intermediate is its opposite number and the reactive intermediate
Reactive intermediate
In chemistry a reactive intermediate is a short-lived, high energy, highly reactive molecule. When generated in a chemical reaction it will quickly convert into a more stable molecule. Only in exceptional cases can these compounds be isolated and stored, e.g. low temperatures, matrix isolation...
in electrophilic aromatic substitution
Electrophilic aromatic substitution
Electrophilic aromatic substitution EAS is an organic reaction in which an atom, usually hydrogen, appended to an aromatic system is replaced by an electrophile...
. 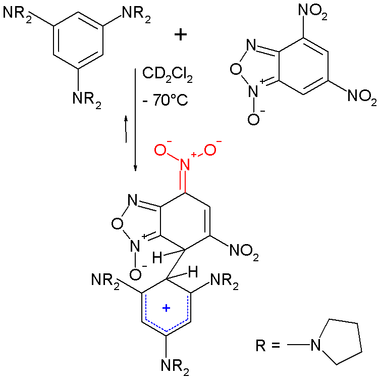 The Janovski reaction is the reaction of 1,3-dinitrobenzene with an enol
Enol
Enols are alkenes with a hydroxyl group affixed to one of the carbon atoms composing the double bond. Alkenes with a hydroxyl group on both sides of the double bond are called enediols. Deprotonated anions of enols are called enolates...
izable ketone
Ketone
In organic chemistry, a ketone is an organic compound with the structure RCR', where R and R' can be a variety of atoms and groups of atoms. It features a carbonyl group bonded to two other carbon atoms. Many ketones are known and many are of great importance in industry and in biology...
to the Meisenheimer adduct.

In the Zimmermann reaction the Janovski adduct is oxidized with excess base to a strongly colored enolate with subsequent reduction of the dinitro compound to the aromatic nitro amine. This reaction is the basis of the Zimmermann test used for the detection of Ketosteroids. 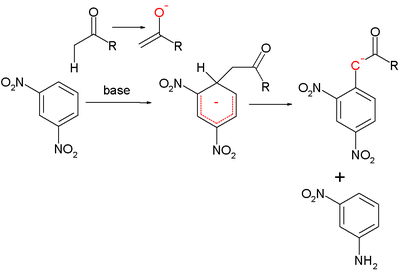