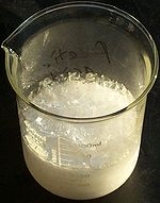 Overview
Acetic acid is an organic compound
Organic compound
An organic compound is any member of a large class of gaseous, liquid, or solid chemical compounds whose molecules contain carbon. For historical reasons discussed below, a few types of carbon-containing compounds such as carbides, carbonates, simple oxides of carbon, and cyanides, as well as the...
with the chemical formula
Chemical formula
A chemical formula or molecular formula is a way of expressing information about the atoms that constitute a particular chemical compound....
CH3CO2H (also written as CH3COOH). It is a colourless liquid that when undiluted is also called glacial acetic acid. Acetic acid is the main component of vinegar
Vinegar
Vinegar is a liquid substance consisting mainly of acetic acid and water, the acetic acid being produced through the fermentation of ethanol by acetic acid bacteria. Commercial vinegar is produced either by fast or slow fermentation processes. Slow methods generally are used with traditional...
(apart from water), and has a distinctive sour taste and pungent smell. It is mainly produced as a precursor to polyvinylacetate and cellulose acetate. Although it is classified as a weak acid
Weak acid
A weak acid is an acid that dissociates incompletely. It does not release all of its hydrogens in a solution, donating only a partial amount of its protons to the solution...
, concentrated acetic acid is corrosive, and attacks the skin.

What can prevent the production of acetic acid when alcohol came in to contact with platinum?

What happens when acetic acid interacts with silver?
More
x