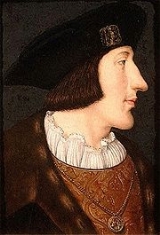 Order of the Most Holy Annunciation
Topic Home
Discussion
0

Encyclopedia
The Supreme Order of the Most Holy Annunciation (Ordine Supremo della Santissima Annunziata) is an order of chivalry, or knighthood, originating in mediæval Italy
Italy
Italy , officially the Italian Republic languages]] under the European Charter for Regional or Minority Languages. In each of these, Italy's official name is as follows:;;;;;;;;), is a unitary parliamentary republic in South-Central Europe. To the north it borders France, Switzerland, Austria and...
. It eventually was the pinnacle of the honours system in the Kingdom of Italy, which ceased to be a national order when the kingdom became a republic in 1946. Today, the order continues as a dynastic order under the jurisdiction of the Head of the House of Savoy
House of Savoy
The House of Savoy was formed in the early 11th century in the historical Savoy region. Through gradual expansion, it grew from ruling a small county in that region to eventually rule the Kingdom of Italy from 1861 until the end of World War II, king of Croatia and King of Armenia...
, Victor Emmanuel, Prince of Naples, who is the order's hereditary Sovereign and Grand Master.

The origins of the Supreme Order of the Most Holy Annunciation begins in 1362, when Amadeus VI, Count of Savoy (1343-1383) instituted the order's earliest designation, under the title of Order of the Collar. Even at this time, the order was dedicated to the Blessed Virgin Mary, who is celebrated as "Our Lady of the Annunciation." Thus, the order is a dynastic religious (or Catholic) order of chivalry.

Under its first formulation, the order had fifteen knights. The number was symbolic of the number of daily masses celebrated with the order. In 1409, Amadeus VIII, Duke of Savoy, gave the order its first known statutes, and in 1434, he extended the order to five more knights.

Amadeus VIII's statutes were subsequently amended and reformed by Charles III, Duke of Savoy
Charles III, Duke of Savoy
Charles III of Savoy , often called Charles the Good, was Duke of Savoy from 1504 to 1553, although most of his lands were ruled by the French between 1536 and his death....
in 1518, by Emanuele Filiberto, Duke of Savoy
Emmanuel Philibert, Duke of Savoy
Emmanuel Philibert was Duke of Savoy from 1553 to 1580....
in 1570, and thereafter by succeeding Sovereigns. The most recent took place on 11 June 1985 by HRH Victor Emmanuel, Prince of Naples and hereditary Grand Master of the order. It was in 1518, that many of the present designations were instituted. Most importantly, the order's name was changed to its current name, The Most Holy Order of the Annunciation. The badge of the order was also changed, with the representation of the Blessed Virgin Mary being added.

The order, throughout its early history and following the reforms of Charles III
Charles III, Duke of Savoy
Charles III of Savoy , often called Charles the Good, was Duke of Savoy from 1504 to 1553, although most of his lands were ruled by the French between 1536 and his death....
, was awarded for supreme recognition of distinguished services. The order constituted a kind of religious and military fraternity between the Sovereign Head of the Order and his companions; it was reserved exclusively to distinguished men-at-arms who, apart from exemplary service, had to be of illustrious birth, particularly of catholic and noble birth.

Eventually, it was deemed appropriate to recognize also those who had rendered distinguished service to the Kingdom of Italy (and now the House of Savoy) in the exercise of high civil offices, not requiring, when a such achievements could be demonstrated, nobility of birth as well.

Today, the order holds the following other regulations:

In 1925, a law was passed on the day before Christmas which made the Head of Government the Secretary of the Order, and stipulated that he would preside over the Knights of the Order at public functions and ceremonies. 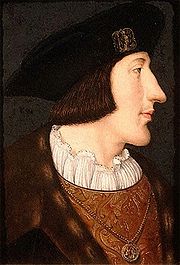 The order has only one class, i.e. Knight. The full Italian title is Cavaliere dell'Ordine Supremo della Santissima Annunziata.

The primary and oldest insignia of the order is its collar. It consists of a solid gold medallion of the collar, which portrays the Annunciation of the Blessed Virgin Mary by the Archangel Gabriel. The medallion is surrounded by three intertwined Savoyan knots, decorated with small crosses fleury, and in the upper center, between two of the Savoyan knots, a cluster of rays with a dove, representing the Holy Spirit, is depicted also in gold.

The badge is suspended from a gold chain made up of fifteen ornate gold sections, each of which is linked by Savoyan knot. Each has the letters F.E.R.T. interwoven. The meaning of these letters have been of some controversy, to which a number of interpretations have been offered. The first states that the letters stand for Fortitudo Eius Rhodum Tulit (meaning "By his bravery he conquered Rhodes"), referring to the victory at Rhodes by Count Amadeus V in 1310.

Some have also suggested that the letters are actually the third person singular of the present indicative tense of the Latin verb ferre, which would indicate that the order is supported by the bond of faith sworn to the Virgin Mary. It has been noted that the letters FERT are already found on the tombs of members of the House of Savoy long before 1310 and suggested that they represent a local medieval variant of the Latin third person singular past tense meaning "he bore" (i.e., "Christ bore our sins/sufferings"). The letters may also stand for Foedere et Religione Tenemur (meaning "We are held by Pact and Religion"), a motto associated with Victor Amadeus I (1718-1730). It may also stand for Fortitudo Eius Republicam Tenet (meaning "His strength defends the State").

The star of the order, which was first used in 1680 by specifications of the Royal Lady Maria Giovana Battista, Duchess Regent of Savoy, is of gold and also has a representation of the Annunciation in a medallion in the center which is set within a gold cross of four pommels. This is surrounded by a cluster of gold rays. Between the arms of the cross of four pommels are the letters F.E.R.T.

The Grande Collana differs from the Piccola Collana in that the collar consists of fourteen ornate sections, each of which is made up of the letters F.E.R.T. in gold, intertwined with a white and red enameled Savoyan knot. The sections are interlinked with fourteen roses, alternately enameled red and white. The roses represent the mysteries in the life of the Blessed Virgin Mary. The knots surrounding the medallion of the collar is enameled white, red, and blue.

The insignia of the order has the following regulations:

When the order is not worn, Knights may wear a gold miniature of the badge (medallion of the collar) of the order suspended from a red ribbon. They may also wear either a ribbon-bar (upon a uniform) or a rosette (upon a suite), both of which are red and have a miniature cross of four pommels engraved with the Annunciation.