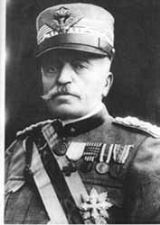 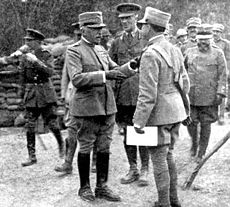 Luigi Cadorna GCB
GCB
GCB may stand for:* Gaming Control Board, any governmental body that regulates gambling in its jurisdiction* Generator circuit-breaker, a special circuit breaker in the high-current connection between generator and generator transformer...
(September 4, 1850, Verbania
Verbania
Verbania is a city and comune on the shore of Lake Maggiore, Piedmont, in northwest Italy, about north-west of Milan and about from Locarno in Switzerland.-Overview:...
, Piedmont
Piedmont
Piedmont is one of the 20 regions of Italy. It has an area of 25,402 square kilometres and a population of about 4.4 million. The capital of Piedmont is Turin. The main local language is Piedmontese. Occitan is also spoken by a minority in the Occitan Valleys situated in the Provinces of...
– December 21, 1928) was an Italian
Italian people
The Italian people are an ethnic group that share a common Italian culture, ancestry and speak the Italian language as a mother tongue. Within Italy, Italians are defined by citizenship, regardless of ancestry or country of residence , and are distinguished from people...

Luigi Cadorna was born to General Raffaele Cadorna
Raffaele Cadorna
Count Raffaele Cadorna was an Italian general who served as one of the major Piedmontese leaders responsible for the unification of Italy during the mid-19th century....
in Verbania Pallanza
Verbania
Verbania is a city and comune on the shore of Lake Maggiore, Piedmont, in northwest Italy, about north-west of Milan and about from Locarno in Switzerland.-Overview:...
, Piedmont
Piedmont
Piedmont is one of the 20 regions of Italy. It has an area of 25,402 square kilometres and a population of about 4.4 million. The capital of Piedmont is Turin. The main local language is Piedmontese. Occitan is also spoken by a minority in the Occitan Valleys situated in the Provinces of...
in 1850, and he joined the Italian Army
Italian Army
The Italian Army is the ground defence force of the Italian Armed Forces. It is all-volunteer force of active-duty personnel, numbering 108,355 in 2010. Its best-known combat vehicles are the Dardo infantry fighting vehicle, the Centauro tank destroyer and the Ariete tank, and among its aircraft...
in 1868. He was offered the post of chief of staff for the first time in 1908, which he rejected due to the issue of political control during wartime. He was again offered the position in July 1914, as the Triple Entente
Triple Entente
The Triple Entente was the name given to the alliance among Britain, France and Russia after the signing of the Anglo-Russian Entente in 1907....
and Central Powers
Central Powers
The Central Powers were one of the two warring factions in World War I , composed of the German Empire, the Austro-Hungarian Empire, the Ottoman Empire, and the Kingdom of Bulgaria...
girded for war. When Italy entered the war in May 1915 on the side of the Entente, Cadorna fielded thirty-six infantry divisions composed of 875,000 men, but only 120 modern artillery pieces.

Cadorna launched four offensives in 1915, all along the Isonzo River. The goal of these offensives was the fortress of Gorizia
Gorizia
Gorizia is a town and comune in northeastern Italy, in the autonomous region of Friuli Venezia Giulia. It is located at the foot of the Julian Alps, bordering Slovenia. It is the capital of the Province of Gorizia, and it is a local center of tourism, industry, and commerce. Since 1947, a twin...
, the capture of which would permit the Italian armies to pivot south and march on Trieste
Trieste
Trieste is a city and seaport in northeastern Italy. It is situated towards the end of a narrow strip of land lying between the Adriatic Sea and Italy's border with Slovenia, which lies almost immediately south and east of the city...
, or continue on to the Ljubljana Pass. All four offensives failed, resulting in some 250,000 Italian casualties for little material gain. Cadorna would ultimately fight eleven battles on the Isonzo between 1915 and 1917. Additional forces were arrayed along the Trentino salient, attacking towards Rovereto
Rovereto
Rovereto is a city and comune in Trentino in northern Italy, located in the Vallagarina valley of the Adige River.-History:Rovereto was an ancient fortress town standing at the frontier between the bishopric of Trento - an independent state until 1797 - and the republic of Venice, and later...
, Trento
Trento
Trento is an Italian city located in the Adige River valley in Trentino-Alto Adige/Südtirol. It is the capital of Trentino...
, and Bolzano. These attacks also failed. The terrain along the Isonzo and Trentino was completely unsuited for offensive warfare–mountainous and broken, with no room for maneuver.

Historians describe Cadorna as a martinet
Martinet
The martinet is a punitive device traditionally used in France and other parts of Europe. The word also has other usages . It is also a term for a type of hammer in French, a diminutive of marteau , "hammer".-Object:...
, excessively ruthless with his troops and dismissive of his country's political authorities. During the course of war he fired 217 officers; during the Battle of Caporetto
Battle of Caporetto
The Battle of Caporetto , took place from 24 October to 19 November 1917, near the town of Kobarid , on the Austro-Italian front of World War I...
he would order the summary execution of officers whose units retreated. His harsh approach to discipline has been described as follows by one historian:


One in every seventeen Italian soldiers faced a disciplinary charge in the war, and 61 per cent were found guilty. About 750 were executed, the highest number of any army in the war, and Cadorna reintroduced the Roman practice of decimation
Decimation (Roman Army)
Decimation |ten]]") was a form of military discipline used by officers in the Roman Army to punish mutinous or cowardly soldiers. The word decimation is derived from Latin meaning "removal of a tenth".-Procedure:...
- the killing of every tenth man - for units which failed to perform in battle.

On October 24, 1917, a combined Austro-Hungarian/German army struck across the Isonzo River at Caporetto and by November 12 had advanced all the way to the Piave River
Piave River
Piave is a river in north Italy. It begins in the Alps and flows southeast for into the Adriatic Sea near the city of Venice....
. Cadorna's disposition of most of his troops far forward, with little defense in depth, contributed greatly to the disaster; but graver still were the responsibilities of other officers, notably Pietro Badoglio
Pietro Badoglio
Pietro Badoglio, 1st Duke of Addis Abeba, 1st Marquess of Sabotino was an Italian soldier and politician...
, then corps commander in a sector overrun by the Austro-German attack. The Italian Army fled in disarray and seemed on the verge of total collapse; 275,000 soldiers surrendered. Cadorna was sacked and replaced by General Armando Diaz
Armando Diaz
Armando Diaz, 1st Duca della Vittoria was an Italian general and a Marshal of Italy.Born in Naples, Diaz began his military career as a student at the Military Academy of Turin, where he became an artillery officer. He was a colonel commanding the 93rd infantry during the Italo-Turkish War, and...
; he was appointed as the Italian representant to the Allied Supreme War Council
Supreme War Council
The Supreme War Council was a central command created by British Prime Minister David Lloyd George to coordinate Allied military strategy during World War I. It was founded in 1917, and was based in Versailles...
set up in Versailles
Versailles
Versailles , a city renowned for its château, the Palace of Versailles, was the de facto capital of the kingdom of France for over a century, from 1682 to 1789. It is now a wealthy suburb of Paris and remains an important administrative and judicial centre...
. Then the Italian forces rallied behind the Piave and Monte Grappa (a mountain Cadorna himself had previously begun to fortify, in a moment of almost prophetical insight) and reversed, with the help of several Allied divisions, the course of the conflict.

After the war, there was an enquiry held by the Italian government to investigate the defeat at Caporetto. It was published in 1919 and was highly critical of Cadorna, at that time a bitter man busy in writing his memoirs who claimed that he had no responsibility for the defeat, despite fleeing to Padua during the battle and abandoning the entire Italian Second Army to its fate. Nevertheless, he was made a Field Marshal (Maresciallo d'Italia) in 1924 when Benito Mussolini
Benito Mussolini
Benito Amilcare Andrea Mussolini was an Italian politician who led the National Fascist Party and is credited with being one of the key figures in the creation of Fascism....
seized power.

Great Britain appointed Cadorna an honorary Knight Grand Cross of the Order of the Bath
Order of the Bath
The Most Honourable Order of the Bath is a British order of chivalry founded by George I on 18 May 1725. The name derives from the elaborate mediæval ceremony for creating a knight, which involved bathing as one of its elements. The knights so created were known as Knights of the Bath...
(GCB) in 1915.