Encyclopedia
The 36th parallel north is a circle of latitude
Circle of latitude
A circle of latitude, on the Earth, is an imaginary east-west circle connecting all locations that share a given latitude...
that is 36 degrees
Degree (angle)
A degree , usually denoted by ° , is a measurement of plane angle, representing 1⁄360 of a full rotation; one degree is equivalent to π/180 radians...
north
True north
True north is the direction along the earth's surface towards the geographic North Pole.True geodetic north usually differs from magnetic north , and from grid north...
of the Earth's
Earth
Earth is the third planet from the Sun, and the densest and fifth-largest of the eight planets in the Solar System. It is also the largest of the Solar System's four terrestrial planets...
equatorial plane
Equator
An equator is the intersection of a sphere's surface with the plane perpendicular to the sphere's axis of rotation and containing the sphere's center of mass....
. It crosses Africa
Africa
Africa is the world's second largest and second most populous continent, after Asia. At about 30.2 million km² including adjacent islands, it covers 6% of the Earth's total surface area and 20.4% of the total land area...
, the Mediterranean Sea
Mediterranean Sea
The Mediterranean Sea is a sea connected to the Atlantic Ocean surrounded by the Mediterranean region and almost completely enclosed by land: on the north by Anatolia and Europe, on the south by North Africa, and on the east by the Levant...
, Asia
Asia
Asia is the world's largest and most populous continent, located primarily in the eastern and northern hemispheres. It covers 8.7% of the Earth's total surface area and with approximately 3.879 billion people, it hosts 60% of the world's current human population...
, the Pacific Ocean
Pacific Ocean
The Pacific Ocean is the largest of the Earth's oceanic divisions. It extends from the Arctic in the north to the Southern Ocean in the south, bounded by Asia and Australia in the west, and the Americas in the east.At 165.2 million square kilometres in area, this largest division of the World...
, North America
North America
North America is a continent wholly within the Northern Hemisphere and almost wholly within the Western Hemisphere. It is also considered a northern subcontinent of the Americas...
and the Atlantic Ocean
Atlantic Ocean
The Atlantic Ocean is the second-largest of the world's oceanic divisions. With a total area of about , it covers approximately 20% of the Earth's surface and about 26% of its water surface area...
.

From 7 April 1991 to 31 December 1996, the parallel defined the limit of the northern no-fly zone
Iraqi no-fly zones
The Iraqi no-fly zones were a set of two separate no-fly zones , and were proclaimed by the United States, United Kingdom and France after the Gulf War of 1991 to protect the Kurdish people in northern Iraq and Shiite Muslims in the south. Iraqi aircraft were forbidden from flying inside the zones...
in Iraq
Iraq
Iraq ; officially the Republic of Iraq is a country in Western Asia spanning most of the northwestern end of the Zagros mountain range, the eastern part of the Syrian Desert and the northern part of the Arabian Desert....
. 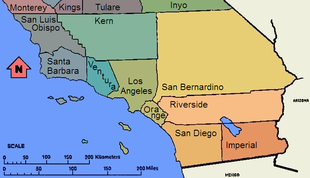 on the north and the counties of
San Luis Obispo
San Luis Obispo County, California
San Luis Obispo County is a county located along the Pacific Ocean in the Central Coast of the U.S. state of California, between Los Angeles and the San Francisco Bay Area. As of the 2010 census its population was 269,637, up from 246,681 at the 2000 census...
,
Kern
Kern County, California
Spreading across the southern end of the California Central Valley, Kern County is the fifth-largest county by population in California. Its economy is heavily linked to agriculture and to petroleum extraction, and there is a strong aviation and space presence. Politically, it has generally...
, and
San Bernardino
San Bernardino County, California
San Bernardino County is a county in the U.S. state of California. As of the 2010 census, the population was 2,035,210, up from 1,709,434 as of the 2000 census...

The parallel 36° north approximately forms the southernmost boundary of the Missouri Bootheel with the State of Arkansas
Arkansas
Arkansas is a state located in the southern region of the United States. Its name is an Algonquian name of the Quapaw Indians. Arkansas shares borders with six states , and its eastern border is largely defined by the Mississippi River...
.

The 36th parallel passes through Duke University in several places. Its Campus Drive that connects the campuses crosses the parallel several times. The Duke Gardens
Sarah P. Duke Gardens
The Sarah P. Duke Gardens consist of approximately 55 acres of landscaped and wooded areas at Duke University. There are five miles of allées, walks, and pathways throughout the gardens...
has a "36th Parallel Club" although the garden itself is just north of the parallel.