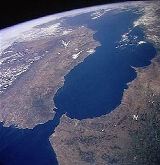 Overview
The Strait of Gibraltar (Arabic
Arabic language
Arabic is a name applied to the descendants of the Classical Arabic language of the 6th century AD, used most prominently in the Quran, the Islamic Holy Book...
: مضيق جبل طارق) is a narrow strait
Strait
A strait or straits is a narrow, typically navigable channel of water that connects two larger, navigable bodies of water. It most commonly refers to a channel of water that lies between two land masses, but it may also refer to a navigable channel through a body of water that is otherwise not...
that connects the Atlantic Ocean
Atlantic Ocean
The Atlantic Ocean is the second-largest of the world's oceanic divisions. With a total area of about , it covers approximately 20% of the Earth's surface and about 26% of its water surface area...
to the Mediterranean Sea
Mediterranean Sea
The Mediterranean Sea is a sea connected to the Atlantic Ocean surrounded by the Mediterranean region and almost completely enclosed by land: on the north by Anatolia and Europe, on the south by North Africa, and on the east by the Levant...
and separates Spain
Spain
Spain , officially the Kingdom of Spain languages]] under the European Charter for Regional or Minority Languages. In each of these, Spain's official name is as follows:;;;;;;), is a country and member state of the European Union located in southwestern Europe on the Iberian Peninsula...
in Europe
Europe
Europe is, by convention, one of the world's seven continents. Comprising the westernmost peninsula of Eurasia, Europe is generally 'divided' from Asia to its east by the watershed divides of the Ural and Caucasus Mountains, the Ural River, the Caspian and Black Seas, and the waterways connecting...
from Morocco
Morocco
Morocco , officially the Kingdom of Morocco , is a country located in North Africa. It has a population of more than 32 million and an area of 710,850 km², and also primarily administers the disputed region of the Western Sahara...
in Africa
Africa
Africa is the world's second largest and second most populous continent, after Asia. At about 30.2 million km² including adjacent islands, it covers 6% of the Earth's total surface area and 20.4% of the total land area...
. The name comes from Gibraltar
Rock of Gibraltar
The Rock of Gibraltar is a monolithic limestone promontory located in Gibraltar, off the southwestern tip of Europe on the Iberian Peninsula. It is high...
, which in turn originates from the Arabic
Arabic language
Arabic is a name applied to the descendants of the Classical Arabic language of the 6th century AD, used most prominently in the Quran, the Islamic Holy Book...
Jebel Tariq (meaning "Tariq's mountain"), albeit the Arab name for the Strait is Bab el-Zakat or "Gate of Charity". It is also known as the Straits of Gibraltar, or STROG (Strait Of Gibraltar), in naval
Navy
A navy is the branch of a nation's armed forces principally designated for naval and amphibious warfare; namely, lake- or ocean-borne combat operations and related functions...
use and as "Pillars of Hercules
Pillars of Hercules
The Pillars of Hercules was the phrase that was applied in Antiquity to the promontories that flank the entrance to the Strait of Gibraltar. The northern Pillar is the Rock of Gibraltar in the British overseas territory of Gibraltar...
" (Greek
Greek language
Greek is an independent branch of the Indo-European family of languages. Native to the southern Balkans, it has the longest documented history of any Indo-European language, spanning 34 centuries of written records. Its writing system has been the Greek alphabet for the majority of its history;...
: Ηράκλειες Στήλες) in the ancient world.

Who discovered the Strait of Gibraltar and when?
More

What is the amount of sea flow, in cubic meters entering the staits of Gibraltar

What are the Pillars of Hercules?

Is there a road transportation system that links the African and Spanish side of the Strait?

How close is Africa and Spain actually across the strait?

Where does the name Gibraltar originate from?
More
x