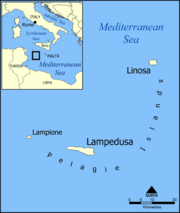 Linosa is one of the Pelagie Islands
Pelagie Islands
The Pelagie Islands , from the Greek pélagos - πέλαγος meaning "open sea", are the three small islands of Lampedusa, Linosa, and Lampione, located in the Mediterranean Sea between Malta and Tunisia, south of Sicily. To the northwest lie the island of Pantelleria and the Strait of Sicily...
in the Sicily Channel of the Mediterranean Sea
Mediterranean Sea
The Mediterranean Sea is a sea connected to the Atlantic Ocean surrounded by the Mediterranean region and almost completely enclosed by land: on the north by Anatolia and Europe, on the south by North Africa, and on the east by the Levant...
. It is a frazione
Frazione
A frazione , in Italy, is the name given in administrative law to a type of territorial subdivision of a comune; for other administrative divisions, see municipio, circoscrizione, quartiere...
of the comune
Comune
In Italy, the comune is the basic administrative division, and may be properly approximated in casual speech by the English word township or municipality.-Importance and function:...
of Lampedusa e Linosa
Lampedusa e Linosa
Lampedusa e Linosa is a comune in the Province of Agrigento in the Italian region of Sicily, located about 300 km south of Palermo, 220 km southwest of Agrigento, and about 260 km southeast of Tunis....
, part of the province of Agrigento
Province of Agrigento
Agrigento is a province in the autonomous island region of Sicily in Italy. It has an area of 3,042 km², and a total population of 454,370...
, Sicily
Sicily
Sicily is a region of Italy, and is the largest island in the Mediterranean Sea. Along with the surrounding minor islands, it constitutes an autonomous region of Italy, the Regione Autonoma Siciliana Sicily has a rich and unique culture, especially with regard to the arts, music, literature,...
, Italy
Italy
Italy , officially the Italian Republic languages]] under the European Charter for Regional or Minority Languages. In each of these, Italy's official name is as follows:;;;;;;;;), is a unitary parliamentary republic in South-Central Europe. To the north it borders France, Switzerland, Austria and...
. It has a population of 450 inhabitants.

The island has an area of 5.45 km² and is of volcanic origin. It is formed by a series of craters of which Monte Vulcano, 195 m high, is the most important. The closest land to Linosa is the island of Lampedusa, which lies 43 km to the south. Linosa is situated 119 km west of Gozo
Gozo
Gozo is a small island of the Maltese archipelago in the Mediterranean Sea. The island is part of the Southern European country of Malta; after the island of Malta itself, it is the second-largest island in the archipelago...
, Malta
Malta
Malta , officially known as the Republic of Malta , is a Southern European country consisting of an archipelago situated in the centre of the Mediterranean, south of Sicily, east of Tunisia and north of Libya, with Gibraltar to the west and Alexandria to the east.Malta covers just over in...
, 121 km southeast of Pantelleria
Pantelleria
Pantelleria , the ancient Cossyra, is an Italian island in the Strait of Sicily in the Mediterranean Sea, southwest of Sicily and just east of the Tunisian coast. Administratively Pantelleria is a comune belonging to the Sicilian province of Trapani...
, 163 km south of Sicily
Sicily
Sicily is a region of Italy, and is the largest island in the Mediterranean Sea. Along with the surrounding minor islands, it constitutes an autonomous region of Italy, the Regione Autonoma Siciliana Sicily has a rich and unique culture, especially with regard to the arts, music, literature,...
and 165 km east of Cape Mahida in Tunisia
Tunisia
Tunisia , officially the Tunisian RepublicThe long name of Tunisia in other languages used in the country is: , is the northernmost country in Africa. It is a Maghreb country and is bordered by Algeria to the west, Libya to the southeast, and the Mediterranean Sea to the north and east. Its area...
.

The Greeks
Greeks
The Greeks, also known as the Hellenes , are a nation and ethnic group native to Greece, Cyprus and neighboring regions. They also form a significant diaspora, with Greek communities established around the world....
, Romans
Ancient Rome
Ancient Rome was a thriving civilization that grew on the Italian Peninsula as early as the 8th century BC. Located along the Mediterranean Sea and centered on the city of Rome, it expanded to one of the largest empires in the ancient world....
, and the Arabs (then called Saracens) have all colonized this island in the Ancient World and the Middle Ages.