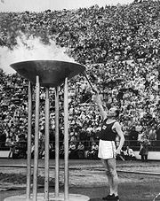 Encyclopedia
The 1952 Summer Olympics, officially known as the Games of the XV Olympiad, were an international
International
----International mostly means something that involves more than one country. The term international as a word means involvement of, interaction between or encompassing more than one nation, or generally beyond national boundaries...
multi-sport event
Multi-sport event
A multi-sport event is an organized sporting event, often held over multiple days, featuring competition in many different sports between organized teams of athletes from nation-states. The first major, modern, multi-sport event of international significance was the modern Olympic Games.Many...
held in Helsinki
Helsinki
Helsinki is the capital and largest city in Finland. It is in the region of Uusimaa, located in southern Finland, on the shore of the Gulf of Finland, an arm of the Baltic Sea. The population of the city of Helsinki is , making it by far the most populous municipality in Finland. Helsinki is...
, Finland
Finland
Finland , officially the Republic of Finland, is a Nordic country situated in the Fennoscandian region of Northern Europe. It is bordered by Sweden in the west, Norway in the north and Russia in the east, while Estonia lies to its south across the Gulf of Finland.Around 5.4 million people reside...
in 1952. Helsinki had been earlier given the 1940 Summer Olympics
1940 Summer Olympics
The anticipated 1940 Summer Olympics, officially known as the Games of the XII Olympiad and originally scheduled to be held from September 21 to October 6, 1940, in Tokyo, Japan, were cancelled due to the outbreak of World War II...
, which were cancelled due to World War II. It is famous for being the Olympic Games at which the most number of world records were broken, before the 2008 Summer Olympics
2008 Summer Olympics
The 2008 Summer Olympics, officially known as the Games of the XXIX Olympiad, was a major international multi-sport event that took place in Beijing, China, from August 8 to August 24, 2008. A total of 11,028 athletes from 204 National Olympic Committees competed in 28 sports and 302 events...
in Beijing
Beijing
Beijing , also known as Peking , is the capital of the People's Republic of China and one of the most populous cities in the world, with a population of 19,612,368 as of 2010. The city is the country's political, cultural, and educational center, and home to the headquarters for most of China's...
.

Helsinki was chosen as the host city over bids from Amsterdam and five American cities at the 40th IOC Session on June 21, 1947, in Stockholm
Stockholm
Stockholm is the capital and the largest city of Sweden and constitutes the most populated urban area in Scandinavia. Stockholm is the most populous city in Sweden, with a population of 851,155 in the municipality , 1.37 million in the urban area , and around 2.1 million in the metropolitan area...
, Sweden
Sweden
Sweden , officially the Kingdom of Sweden , is a Nordic country on the Scandinavian Peninsula in Northern Europe. Sweden borders with Norway and Finland and is connected to Denmark by a bridge-tunnel across the Öresund....
.

The voting results, in a chart below, comes from the International Olympic Committee Vote History web page. 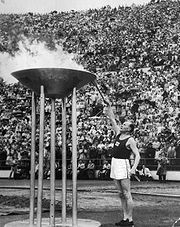 A total of 69 nations participated in these Games, up from 59 in the 1948 Games
1948 Summer Olympics
The 1948 Summer Olympics, officially known as the Games of the XIV Olympiad, were an international multi-sport event which was held in London, England, United Kingdom. After a 12-year hiatus because of World War II, these were the first Summer Olympics since the 1936 Games in Berlin...
. Thirteen nations made their first Olympic appearance in 1952: The Bahamas
The Bahamas
The Bahamas , officially the Commonwealth of the Bahamas, is a nation consisting of 29 islands, 661 cays, and 2,387 islets . It is located in the Atlantic Ocean north of Cuba and Hispaniola , northwest of the Turks and Caicos Islands, and southeast of the United States...
, the People's Republic of China
China
Chinese civilization may refer to:* China for more general discussion of the country.* Chinese culture* Greater China, the transnational community of ethnic Chinese.* History of China* Sinosphere, the area historically affected by Chinese culture...
, Gold Coast
Gold Coast (British colony)
The Gold Coast was a British colony on the Gulf of Guinea in west Africa that became the independent nation of Ghana in 1957.-Overview:The first Europeans to arrive at the coast were the Portuguese in 1471. They encountered a variety of African kingdoms, some of which controlled substantial...
(now Ghana
Ghana
Ghana , officially the Republic of Ghana, is a country located in West Africa. It is bordered by Côte d'Ivoire to the west, Burkina Faso to the north, Togo to the east, and the Gulf of Guinea to the south...
), Guatemala
Guatemala
Guatemala is a country in Central America bordered by Mexico to the north and west, the Pacific Ocean to the southwest, Belize to the northeast, the Caribbean to the east, and Honduras and El Salvador to the southeast...
, Hong Kong
Hong Kong
Hong Kong is one of two Special Administrative Regions of the People's Republic of China , the other being Macau. A city-state situated on China's south coast and enclosed by the Pearl River Delta and South China Sea, it is renowned for its expansive skyline and deep natural harbour...
, Indonesia
Indonesia
Indonesia , officially the Republic of Indonesia , is a country in Southeast Asia and Oceania. Indonesia is an archipelago comprising approximately 13,000 islands. It has 33 provinces with over 238 million people, and is the world's fourth most populous country. Indonesia is a republic, with an...
, Israel
Israel
The State of Israel is a parliamentary republic located in the Middle East, along the eastern shore of the Mediterranean Sea...
, Netherlands Antilles
Netherlands Antilles
The Netherlands Antilles , also referred to informally as the Dutch Antilles, was an autonomous Caribbean country within the Kingdom of the Netherlands, consisting of two groups of islands in the Lesser Antilles: Aruba, Bonaire and Curaçao , in Leeward Antilles just off the Venezuelan coast; and Sint...
, Nigeria
Nigeria
Nigeria , officially the Federal Republic of Nigeria, is a federal constitutional republic comprising 36 states and its Federal Capital Territory, Abuja. The country is located in West Africa and shares land borders with the Republic of Benin in the west, Chad and Cameroon in the east, and Niger in...
, Soviet Union
Soviet Union
The Soviet Union , officially the Union of Soviet Socialist Republics , was a constitutionally socialist state that existed in Eurasia between 1922 and 1991....
(USSR), Thailand
Thailand
Thailand , officially the Kingdom of Thailand , formerly known as Siam , is a country located at the centre of the Indochina peninsula and Southeast Asia. It is bordered to the north by Burma and Laos, to the east by Laos and Cambodia, to the south by the Gulf of Thailand and Malaysia, and to the...
, and Vietnam
Vietnam
Vietnam – sometimes spelled Viet Nam , officially the Socialist Republic of Vietnam – is the easternmost country on the Indochina Peninsula in Southeast Asia. It is bordered by China to the north, Laos to the northwest, Cambodia to the southwest, and the South China Sea –...
.

Japan
Japan
Japan is an island nation in East Asia. Located in the Pacific Ocean, it lies to the east of the Sea of Japan, China, North Korea, South Korea and Russia, stretching from the Sea of Okhotsk in the north to the East China Sea and Taiwan in the south...
and Germany
Germany
Germany , officially the Federal Republic of Germany , is a federal parliamentary republic in Europe. The country consists of 16 states while the capital and largest city is Berlin. Germany covers an area of 357,021 km2 and has a largely temperate seasonal climate...
were both reinstated and permitted to send athletes after being banned for 1948 for their instigation of World War II
World War II
World War II, or the Second World War , was a global conflict lasting from 1939 to 1945, involving most of the world's nations—including all of the great powers—eventually forming two opposing military alliances: the Allies and the Axis...
. Due to the division of Germany, German athletes from Saar
Saar (protectorate)
The Saar Protectorate was a German borderland territory twice temporarily made a protectorate state. Since rejoining Germany the second time in 1957, it is the smallest Federal German Area State , the Saarland, not counting the city-states Berlin, Hamburg and Bremen...
entered a separate team for the only time. Only West Germany
West Germany
West Germany is the common English, but not official, name for the Federal Republic of Germany or FRG in the period between its creation in May 1949 to German reunification on 3 October 1990....
would provide athletes for the actual Germany team, since East Germany refused to participate in a joint German team.

These are the top ten nations that won medals at these Games.