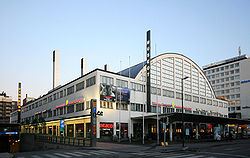 Tennispalatsi is a cultural and recreational center in Kamppi
Kamppi
Kamppi is a neighbourhood in the centre of Helsinki, the capital of Finland. The name originally referred to a small area known as the "Kamppi field" , but according to the current official designation, "Kamppi" encompasses a much larger area with a population of 10,000 in 2004.The heart of Kamppi...
, Helsinki
Helsinki
Helsinki is the capital and largest city in Finland. It is in the region of Uusimaa, located in southern Finland, on the shore of the Gulf of Finland, an arm of the Baltic Sea. The population of the city of Helsinki is , making it by far the most populous municipality in Finland. Helsinki is...
, Finland
Finland
Finland , officially the Republic of Finland, is a Nordic country situated in the Fennoscandian region of Northern Europe. It is bordered by Sweden in the west, Norway in the north and Russia in the east, while Estonia lies to its south across the Gulf of Finland.Around 5.4 million people reside...
. It houses a Finnkino
Finnkino
Finnkino Oy is a Finnish film distributor and the biggest movie theatre chain in Finland. It was established in 1986 as a union of 34 companies working in the film industry. In 1994 Finnkino was acquired by the Rautakirja Group, which became a division of the Sanoma Group in 1999. Finnkino operates...
movie theatre, the Art Museum Tennis Palace, the Museum of Cultures, and small shops.

Tennispalatsi was built in 1938 in preparation for the 1940 Summer Olympics
1940 Summer Olympics
The anticipated 1940 Summer Olympics, officially known as the Games of the XII Olympiad and originally scheduled to be held from September 21 to October 6, 1940, in Tokyo, Japan, were cancelled due to the outbreak of World War II...
. The functionalist
Functionalism (architecture)
Functionalism, in architecture, is the principle that architects should design a building based on the purpose of that building. This statement is less self-evident than it first appears, and is a matter of confusion and controversy within the profession, particularly in regard to modern...
building, which had four tennis
Tennis
Tennis is a sport usually played between two players or between two teams of two players each . Each player uses a racket that is strung to strike a hollow rubber ball covered with felt over a net into the opponent's court. Tennis is an Olympic sport and is played at all levels of society at all...
courts, was designed by Helge Lundström. In the 1952 Summer Olympics
1952 Summer Olympics
The 1952 Summer Olympics, officially known as the Games of the XV Olympiad, were an international multi-sport event held in Helsinki, Finland in 1952. Helsinki had been earlier given the 1940 Summer Olympics, which were cancelled due to World War II...
the basketball
Basketball
Basketball is a team sport in which two teams of five players try to score points by throwing or "shooting" a ball through the top of a basketball hoop while following a set of rules...
preliminary games were held in Tennispalatsi.

Finnkino
Finnkino
Finnkino Oy is a Finnish film distributor and the biggest movie theatre chain in Finland. It was established in 1986 as a union of 34 companies working in the film industry. In 1994 Finnkino was acquired by the Rautakirja Group, which became a division of the Sanoma Group in 1999. Finnkino operates...
has a 14-theatre multiplex
Multiplex (movie theater)
A multiplex is a movie theater complex with multiple screens, typically three or more. They are usually housed in a specially designed building. Sometimes, an existing venue undergoes a renovation where the existing auditoriums are split into smaller ones, or more auditoriums are added in an...
in Tennispalatsi. It was opened on 26 February 1999. The auditoriums vary in size from 92 to 703 seats. The biggest one has a screen of 184.8 square metres (221 sq yd) (8.8 metre). The auditoriums utilize Dolby Digital
Dolby Digital
Dolby Digital is the name for audio compression technologies developed by Dolby Laboratories. It was originally called Dolby Stereo Digital until 1994. Except for Dolby TrueHD, the audio compression is lossy. The first use of Dolby Digital was to provide digital sound in cinemas from 35mm film prints...
, DTS and SDDS
SDDS
Sony Dynamic Digital Sound is a cinema sound system developed by Sony. Compressed digital sound information is recorded on both outer edges of the 35 mm film release print. The system supports up to eight independent channels of sound: five front channels, two surround channels and a single...
technologies. All auditoriums also fulfill the THX
THX
THX is a trade name of a high-fidelity audio/visual reproduction standard for movie theaters, screening rooms, home theaters, computer speakers, gaming consoles, and car audio systems. The current THX was created in 2001 when it spun off from Lucasfilm Ltd...
standards, but after Finnkino quit paying the THX licensing fees in 2004, the THX logos haven't been used in Tennispalatsi or Finnkino's marketing, thus they cannot be considered THX certified anymore.

Tennispalatsi is one of the two big Finnkino movie theatre multiplexes in Helsinki, along with Kinopalatsi. According to Finnkino, it was the world's first movie theatre to utilize THX and SDDS in all auditoriums.