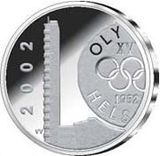 The Helsinki Olympic Stadium , located in the Töölö
Töölö
Töölö is the collective name for the neighbourhoods Etu-Töölö and Taka-Töölö in Helsinki, Finland. The neighbourhoods are located next to the city centre, occupying the western side of the Helsinki Peninsula....
district about 2 kilometres (1.2 mi) from the center of the Finnish
Finland
Finland , officially the Republic of Finland, is a Nordic country situated in the Fennoscandian region of Northern Europe. It is bordered by Sweden in the west, Norway in the north and Russia in the east, while Estonia lies to its south across the Gulf of Finland.Around 5.4 million people reside...
capital Helsinki
Helsinki
Helsinki is the capital and largest city in Finland. It is in the region of Uusimaa, located in southern Finland, on the shore of the Gulf of Finland, an arm of the Baltic Sea. The population of the city of Helsinki is , making it by far the most populous municipality in Finland. Helsinki is...
, is the largest stadium
Stadium
A modern stadium is a place or venue for outdoor sports, concerts, or other events and consists of a field or stage either partly or completely surrounded by a structure designed to allow spectators to stand or sit and view the event.)Pausanias noted that for about half a century the only event...
in the country, nowadays mainly used for hosting sports events and big concerts. The stadium is best known for being the center of activities in the 1952 Summer Olympics
1952 Summer Olympics
The 1952 Summer Olympics, officially known as the Games of the XV Olympiad, were an international multi-sport event held in Helsinki, Finland in 1952. Helsinki had been earlier given the 1940 Summer Olympics, which were cancelled due to World War II...
. During those games, it hosted athletics
Athletics at the 1952 Summer Olympics
At the 1952 Summer Olympics in Helsinki, 33 athletics events were contested, 24 for men and 9 for women. There were a total number of 963 participating athletes from 57 countries.-Medal table:-Men's events:-Women's events:-References:...
, equestrian show jumping
Equestrian at the 1952 Summer Olympics
The Equestrian Events at the 1952 Helsinki Summer Olympics included Dressage, Eventing, and Show Jumping. All three disciplines had both individual and team competitions. The competitions were held from July 28, 1952 to August 3, 1952.-Medal summary:...
, and the football
Football at the 1952 Summer Olympics
The 1952 Olympic football tournament signalled the arrival of the 'Golden Team'; the 'Magical Magyars': Hungary. Ferenc Puskás, the great Hungarian known as the 'Galloping Major' for his military title, said of the 1952 competition: "It was during the Olympics that our football first started to...
finals. It was built however to host the 1940 Summer Olympics
1940 Summer Olympics
The anticipated 1940 Summer Olympics, officially known as the Games of the XII Olympiad and originally scheduled to be held from September 21 to October 6, 1940, in Tokyo, Japan, were cancelled due to the outbreak of World War II...
, which were moved from Tokyo
Tokyo
, ; officially , is one of the 47 prefectures of Japan. Tokyo is the capital of Japan, the center of the Greater Tokyo Area, and the largest metropolitan area of Japan. It is the seat of the Japanese government and the Imperial Palace, and the home of the Japanese Imperial Family...
to Helsinki before being cancelled due to World War II
World War II
World War II, or the Second World War , was a global conflict lasting from 1939 to 1945, involving most of the world's nations—including all of the great powers—eventually forming two opposing military alliances: the Allies and the Axis...
. The stadium was also the venue for the first World Athletics Championships
IAAF World Championships in Athletics
The World Championships in Athletics is an event organized by the International Association of Athletics Federations . Originally, it was organised every four years, but this changed in 1991, and it has since been organised biennially.-History:...
in 1983
1983 World Championships in Athletics
The inaugural World Championships in Athletics were run under the auspices of the International Association of Athletics Federations and were held at the Olympic Stadium in Helsinki, Finland between August 7 and August 14, 1983....
as well as for the 2005 World Championships in Athletics
2005 World Championships in Athletics
The 10th World Championships in Athletics, under the auspices of the International Association of Athletics Federations , were held in the Olympic Stadium, Helsinki, Finland , the site of the first IAAF World Championships in 1983. One theme of the 2005 championships was paralympic sports, some of...
. It is also the home stadium of the Finland national football team
Finland national football team
The Finland national football team represents Finland in international football competitions and is controlled by the Football Association of Finland....
.

Construction of the Olympic Stadium began in 1934 and it was completed in 1938.
The Olympic was designed in functionalistic style by the architects Yrjö Lindegren and Toivo Jäntti. The stadium was completely modernized in 1990–1994 and also renovated just before the 2005 World Championships in Athletics. Its spectator capacity was at its maximum during the 1952 Summer Olympics with over 70,000 spectator places. Nowadays the stadium has 37,500 spectator places. During concerts, depending on the size of the stage, the capacity is 45,000–50,000.

The tower of the stadium, a distinct landmark with a height of 72 metres (236.2 ft), is open for visitors and offers impressive views over Helsinki. It is possible to see into the adjacent Sonera Stadium.

Since March 2007, a Eurasian Eagle-Owl has been spotted living in and around the stadium. On June 6, 2007, during a Euro 2008 qualifying match, the owl delayed play by ten minutes after perching on a goalpost. The owl was later christened Bubi and was named as Helsinki's Resident of the Year.

A Youth Hostel is located within the Stadium complex.