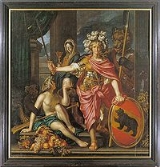 301    San Marino, one of the smallest nations in the world and the world's oldest republic still in existence, is founded by Saint Marinus.

1527    The Florentines drive out the Medici for a second time and Florence re-establishes itself as a republic.

1649    An Act of Parliament declaring England a Commonwealth is passed by the Long Parliament. England would be a republic for the next eleven years.

1793    The first republican state in Germany, the Republic of Mainz, is declared by Andreas Joseph Hofmann.

1905    Norway holds a referendum in favor of monarchy over republic.

1917    Russia is officially proclaimed a republic.

1918    Kaiser Wilhelm II of Germany abdicates after the German Revolution, and Germany is proclaimed a Republic.

1944    Iceland declares independence from Denmark and becomes a republic.

1946    Birth of the Italian Republic: In a referendum, Italians vote to turn Italy from a monarchy into a Republic. After the referendum the king of Italy Umberto II di Savoia is exiled.

1960    Ghana becomes a Republic and Kwame Nkrumah becomes its first President as Queen Elizabeth II of the United Kingdom ceases to be its Head of state.

1966    Malawi becomes a republic, with Hastings Banda as its first President.

1968    A second republic is declared in the Maldives.

1970    Rhodesia declares itself a republic, breaking its last links with the British crown.

1970    The Gambia becomes a republic within the Commonwealth of Nations, with Dawda Jawara as the first President.

1971    Sierra Leone becomes a republic, and Siaka Stevens the president.

1972    Ceylon adopts a new constitution, thus becoming a Republic, changes its name to Sri Lanka, and joins the Commonwealth of Nations.

1980    The Republic of Zimbabwe (formerly Rhodesia) comes into being, with Canaan Banana as the country's first President.

1992    Mauritius becomes a republic while remaining a member of the Commonwealth of Nations.