Encyclopedia
Andreas Joseph Hofmann was a German
Germany
Germany , officially the Federal Republic of Germany , is a federal parliamentary republic in Europe. The country consists of 16 states while the capital and largest city is Berlin. Germany covers an area of 357,021 km2 and has a largely temperate seasonal climate...
philosopher and revolutionary active in the Republic of Mainz
Republic of Mainz
The Republic of Mainz was the first democratic state on the current German territory and was centered in Mainz. A product of the French Revolutionary Wars, it lasted from March to July 1793.-Context:...
. As Chairman of the Rhenish-German National Convention, the earliest parliament in Germany based on the principle of popular sovereignty
Popular sovereignty
Popular sovereignty or the sovereignty of the people is the political principle that the legitimacy of the state is created and sustained by the will or consent of its people, who are the source of all political power. It is closely associated with Republicanism and the social contract...
, he proclaimed the first republic
Republic
A republic is a form of government in which the people, or some significant portion of them, have supreme control over the government and where offices of state are elected or chosen by elected people. In modern times, a common simplified definition of a republic is a government where the head of...
an state in Germany, the Rhenish-German Free State, on March 18, 1793. A strong supporter of the French Revolution
French Revolution
The French Revolution , sometimes distinguished as the 'Great French Revolution' , was a period of radical social and political upheaval in France and Europe. The absolute monarchy that had ruled France for centuries collapsed in three years...
, he argued for an accession of all German territory west of the Rhine to France
France
The French Republic , The French Republic , The French Republic , (commonly known as France , is a unitary semi-presidential republic in Western Europe with several overseas territories and islands located on other continents and in the Indian, Pacific, and Atlantic oceans. Metropolitan France...
and served in the administration of the department Mont-Tonnerre
Mont-Tonnerre
Mont-Tonnerre is the name of a département of the First French Empire in present Germany. It is named after the highest point in the Rhenish Palatinate, the Donnersberg. It was the southernmost of four départements formed in 1798, when the west bank of the Rhine was annexed by France...
under the French Directory
French Directory
The Directory was a body of five Directors that held executive power in France following the Convention and preceding the Consulate...
and the French Consulate
French Consulate
The Consulate was the government of France between the fall of the Directory in the coup of 18 Brumaire in 1799 until the start of the Napoleonic Empire in 1804...
.

Hofmann was born in Zell am Main
Zell am Main
Zell am Main is a municipality in the district of Würzburg in Bavaria in Germany, situated on the river Main....
near Würzburg
Würzburg
Würzburg is a city in the region of Franconia which lies in the northern tip of Bavaria, Germany. Located at the Main River, it is the capital of the Regierungsbezirk Lower Franconia. The regional dialect is Franconian....
as son of a surgeon
Surgery
Surgery is an ancient medical specialty that uses operative manual and instrumental techniques on a patient to investigate and/or treat a pathological condition such as disease or injury, or to help improve bodily function or appearance.An act of performing surgery may be called a surgical...
. After the early death of his parents, he was educated by his uncle Franz Xaver Fahrmann, professor of moral theology
Moral theology
Moral theology is a systematic theological treatment of Christian ethics. It is usually taught on Divinity faculties as a part of the basic curriculum.- External links :*...
at the University of Würzburg
University of Würzburg
The University of Würzburg is a university in Würzburg, Germany, founded in 1402. The university is a member of the distinguished Coimbra Group.-Name:...
. After a year at a Jesuit seminary, Hofmann studied law at the University of Mainz and at the University of Würzburg.

After some years at the Reichshofrat in Vienna
Vienna
Vienna is the capital and largest city of the Republic of Austria and one of the nine states of Austria. Vienna is Austria's primary city, with a population of about 1.723 million , and is by far the largest city in Austria, as well as its cultural, economic, and political centre...
, Hofmann was forced to leave due to his critical publications and returned to Mainz in 1784, where he was hired at the University during the progressive reforms by Elector Friedrich Karl von Erthal. He taught History of Philosophy
History of philosophy
The history of philosophy is the study of philosophical ideas and concepts through time. Issues specifically related to history of philosophy might include : How can changes in philosophy be accounted for historically? What drives the development of thought in its historical context? To what...
until 1791, when he became chair of natural justice
Natural justice
Natural justice is a term of art that denotes specific procedural rights in the English legal system and the systems of other nations based on it. Whilst the term natural justice is often retained as a general concept, it has largely been replaced and extended by the more general "duty to act fairly"...
. Hofmann was a liberal and progressive thinker (for instance, he supported the use of German
German language
German is a West Germanic language, related to and classified alongside English and Dutch. With an estimated 90 – 98 million native speakers, German is one of the world's major languages and is the most widely-spoken first language in the European Union....
instead of Latin
Latin
Latin is an Italic language originally spoken in Latium and Ancient Rome. It, along with most European languages, is a descendant of the ancient Proto-Indo-European language. Although it is considered a dead language, a number of scholars and members of the Christian clergy speak it fluently, and...
in University lectures and in church). However, he became disillusioned with the pace of the reforms in Mainz and welcomed the French Revolution
French Revolution
The French Revolution , sometimes distinguished as the 'Great French Revolution' , was a period of radical social and political upheaval in France and Europe. The absolute monarchy that had ruled France for centuries collapsed in three years...
from the start. As he declared his support openly in his lectures, he was soon spied on by the Mainz authorities. However, before the investigation of his activities had progressed beyond the questioning of his students, the archbishop and his court fled from the advancing French troops under General Custine
Adam Philippe, Comte de Custine
Adam Philippe, Comte de Custine was a French general. Born in Metz, he began his military career as a captain in the Seven Years' War, where he learned to admire the modern military organisation of Prussia....
, who arrived in Mainz on October 21, 1792.

Two days later, Hofmann helped found the Mainz Jacobin club
Jacobin Club
The Jacobin Club was the most famous and influential political club in the development of the French Revolution, so-named because of the Dominican convent where they met, located in the Rue St. Jacques , Paris. The club originated as the Club Benthorn, formed at Versailles from a group of Breton...
and became one of its most active members. A popular and powerful orator, he criticised both the old regime of the Elector and the French military government in his speeches, which were especially supported by the more radical students. Hofmann lectured in the rural areas of the French occupied territory, calling for support of the general elections in February and March 1793 which he helped organize. He was elected into the Rhenish-German National Convention as a representative of Mainz and became its president. On March 18, 1793, Hofmann declared the Rhenish-German Free State from the balcony of the Deutschhaus
Deutschhaus Mainz
The Deutschhaus or Deutschordenskommende is a historical building in Mainz, western Germany, which is presently the seat of the Rhineland-Palatinate Landtag.- History :...
. 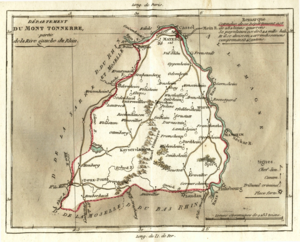 After Napoleon's defeat and the return of Mainz to German control, Hofmann moved to his wife's estates in Winkel
Oestrich-Winkel
Oestrich-Winkel is a town in the Rheingau-Taunus-Kreis in the Regierungsbezirk of Darmstadt in Hesse, Germany.- Location :This is a young town with roughly 12,000 inhabitants, having come into being in 1972 through the merger of the self-governing communities of Mittelheim, Oestrich and Winkel;...
, where he spent the rest of his life until his death in September 1849.
The source of this article is wikipedia, the free encyclopedia.  The text of this article is licensed under the GFDL.