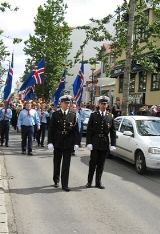 Encyclopedia
Icelandic National Day , 17 June, is a holiday
Holiday
A Holiday is a day designated as having special significance for which individuals, a government, or a religious group have deemed that observance is warranted. It is generally an official or unofficial observance of religious, national, or cultural significance, often accompanied by celebrations...
in Iceland
Iceland
Iceland , described as the Republic of Iceland, is a Nordic and European island country in the North Atlantic Ocean, on the Mid-Atlantic Ridge. Iceland also refers to the main island of the country, which contains almost all the population and almost all the land area. The country has a population...
and celebrates the day in 1944 that The Republic of Iceland (Lýðveldið Ísland) was formed.
The date of 17 June was chosen because it is the birthday of Jón Sigurðsson
Jón Sigurðsson
Jón Sigurðsson was the leader of the 19th century Icelandic independence movement.Born at Hrafnseyri, near Arnarfjörður in the Westfjords area of Iceland, he was the son of a pastor, Sigurður Jónsson. He moved to Copenhagen, Denmark, in 1833 to study grammar and history at the university there...
, a major figure of Icelandic culture
Culture of Iceland
The culture of Iceland is rich and varied as well as being known for its literary heritage which stems from authors from the 12th to 14th centuries. Other Icelandic traditional arts include weaving, silversmithing, and wood carving. The Reykjavík area has several professional theatres, a symphony...
and the leader of the 19th century Icelandic independence movement
Icelandic independence movement
The Icelandic Independence movement is the term used to describe the various efforts made by Icelanders to achieve self-determination and independence from the Kingdom of Denmark throughout the 19th and early 20th century, until full independence was granted in 1918, followed by the severance of...
.

The formation of the republic
Republic
A republic is a form of government in which the people, or some significant portion of them, have supreme control over the government and where offices of state are elected or chosen by elected people. In modern times, a common simplified definition of a republic is a government where the head of...
was based on a clause in the 1918 Act of Union with Denmark, which allowed for a revision in 1943, as well as the results of the 1944 plebiscite
Icelandic referendum, 1944
A referendum was held in Iceland on 24 May 1944. There were two separate issues:#Whether to abolish the Union with Denmark.#Whether to adopt a new republican constitution.Voter turnout was 98.6%.-Abolishing the Act of Union:...
.

Although German occupation of Denmark
Occupation of Denmark
Nazi Germany's occupation of Denmark began with Operation Weserübung on 9 April 1940, and lasted until German forces withdrew at the end of World War II following their surrender to the Allies on 5 May 1945. Contrary to the situation in other countries under German occupation, most Danish...
meant that the revision could not take place, and thus some Icelandic politicians demanded that Icelanders should wait until after the war. The British and U.S governments, which occupied Iceland
Iceland during World War II
The state of Iceland during World War II was that of a sovereign kingdom in personal union with Denmark, with King Christian X as head of state....
at the time, also delayed the declaration by asking the Icelandic parliament to wait until after 1943. Although saddened by the results of the plebiscite, King Christian X sent a letter on 17 June 1944 congratulating Icelanders on forming a Republic.

Abolishing the monarchy resulted in little change to the Icelandic constitution, "The President" was merely substituted for "The King". However the people of Iceland celebrated the end of the long struggle for total independence and praised Jón Sigurðsson
Jón Sigurðsson
Jón Sigurðsson was the leader of the 19th century Icelandic independence movement.Born at Hrafnseyri, near Arnarfjörður in the Westfjords area of Iceland, he was the son of a pastor, Sigurður Jónsson. He moved to Copenhagen, Denmark, in 1833 to study grammar and history at the university there...
for his early independence movement and Sveinn Björnsson
Sveinn Björnsson
Sveinn Björnsson , son of Björn Jónsson and Elísabet Sveinsdóttir, was the first President of the Republic of Iceland.He became a member of Reykjavík town council in 1912 and was its president during 1918–1920....
, who became the first president of Iceland.

Today, Icelanders celebrate this holiday on a national scale. The celebration traditionally takes the form of a parade through each urban area with a brass band at the fore. Riders on Icelandic horse
Icelandic horse
The Icelandic horse is a breed of horse developed in Iceland. Although the horses are small, at times pony-sized, most registries for the Icelandic refer to it as a horse. Icelandic horses are long-lived and hardy. In their native country they have few diseases; Icelandic law prevents horses from...
s often precede the brass band and flagbearers from the Icelandic scout movement traditionally follow the brass band. After the parade several speeches are held out in the open, including one from Fjallkonan
Woman of the mountains
The "Lady of the Mountain" is the female incarnation of Iceland. While she symbolised what Icelanders considered to be genuine and purely Icelandic, in her purity she reflected a deep-seated, but unattainable, wish of Icelanders to be a totally independent nation...
(the woman of the mountain), clad in Skautbúningur
Buningurinn
Þjóðbúningurinn is the collective native term for the Icelandic national costumes. The national costume has enjoyed various levels of popularity since the term was coined in Iceland in the 19th century, during the fight for independence...
, who recites a poem
Poetry
Poetry is a form of literary art in which language is used for its aesthetic and evocative qualities in addition to, or in lieu of, its apparent meaning...
. She represents the fierce spirit of the Icelandic nation and of Icelandic nature; this is in many ways an inheritance from the period of romanticism
Romanticism
Romanticism was an artistic, literary and intellectual movement that originated in the second half of the 18th century in Europe, and gained strength in reaction to the Industrial Revolution...
that reigned when the first steps toward independence were taken. After speeches and other officialities are over, a less formal celebration takes place with musicians entertaining the crowd, candy being devoured by children in huge quantities, and gas-filled balloons escaping their owners and flying to the sky. It is also somewhat traditional to expect rain on this day, particularly in the Southwest of Iceland.