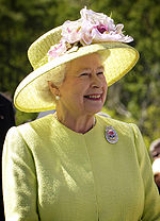 Elizabeth was born in London, and educated privately at home. Her father ascended the throne as George VI in 1936 on the abdication
Edward VIII abdication crisis
In 1936, a constitutional crisis in the British Empire was caused by King-Emperor Edward VIII's proposal to marry Wallis Simpson, a twice-divorced American socialite....
of his brother Edward VIII. Elizabeth began to undertake public duties during the Second World War
World War II
World War II, or the Second World War , was a global conflict lasting from 1939 to 1945, involving most of the world's nations—including all of the great powers—eventually forming two opposing military alliances: the Allies and the Axis...
, in which she served in the Auxiliary Territorial Service
Auxiliary Territorial Service
The Auxiliary Territorial Service was the women's branch of the British Army during the Second World War...
.

1952    Elizabeth II becomes Queen upon the death of her father George VI. At the exact moment of succession, she was in a treehouse at the Treetops Hotel in Kenya.

1957    Queen Elizabeth II becomes the first Canadian Monarch to open up an annual session of the Canadian Parliament, presenting her Speech from the Throne in Ottawa, Canada.

1958    Subscriber Trunk Dialling (STD) is inaugurated in the UK by Queen Elizabeth II when she speaks to the Lord Provost in a call from Bristol to Edinburgh.

We are a moderate, pragmatic people, more comfortable with practice than theory.

Football's a difficult business and aren't they prima donnas?