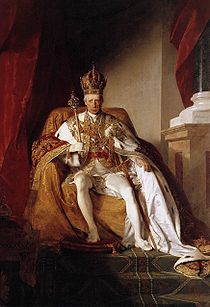 Kaiser is the German
German language
German is a West Germanic language, related to and classified alongside English and Dutch. With an estimated 90 – 98 million native speakers, German is one of the world's major languages and is the most widely-spoken first language in the European Union....
title meaning "Emperor
Emperor
An emperor is a monarch, usually the sovereign ruler of an empire or another type of imperial realm. Empress, the female equivalent, may indicate an emperor's wife or a woman who rules in her own right...
", with Kaiserin being the female equivalent, "Empress". Like the Russian
Russian language
Russian is a Slavic language used primarily in Russia, Belarus, Uzbekistan, Kazakhstan, Tajikistan and Kyrgyzstan. It is an unofficial but widely spoken language in Ukraine, Moldova, Latvia, Turkmenistan and Estonia and, to a lesser extent, the other countries that were once constituent republics...
Czar
Tsar
Tsar is a title used to designate certain European Slavic monarchs or supreme rulers. As a system of government in the Tsardom of Russia and Russian Empire, it is known as Tsarist autocracy, or Tsarism...
it is directly derived from the Latin Emperors' title of Caesar
Caesar (title)
Caesar is a title of imperial character. It derives from the cognomen of Julius Caesar, the Roman dictator...
, which in turn is derived from the personal name of a branch of the gens (clan) Julia, to which Gaius Julius Caesar
Julius Caesar
Gaius Julius Caesar was a Roman general and statesman and a distinguished writer of Latin prose. He played a critical role in the gradual transformation of the Roman Republic into the Roman Empire....
, the forebear of the first imperial family, belonged. Although the British monarchs styled "Emperor of India
Emperor of India
Emperor/Empress of India was used as a title by the last Mughal emperor Bahadur Shah II, and revived by the colonial British monarchs during the British Raj in India....
" were also called "Kaisar-i-Hind
Kaisar-i-Hind
The Kaisar-i-Hind was a medal awarded by the British monarch between 1900 and 1947, to civilians of any nationality who rendered distinguished service in the advancement of the interests of the British Raj....
" in Hindi
Hindi
Standard Hindi, or more precisely Modern Standard Hindi, also known as Manak Hindi , High Hindi, Nagari Hindi, and Literary Hindi, is a standardized and sanskritized register of the Hindustani language derived from the Khariboli dialect of Delhi...
and Urdu
Urdu
Urdu is a register of the Hindustani language that is identified with Muslims in South Asia. It belongs to the Indo-European family. Urdu is the national language and lingua franca of Pakistan. It is also widely spoken in some regions of India, where it is one of the 22 scheduled languages and an...
, this word, although ultimately sharing the same Latin origin, is derived from the Greek
Greek language
Greek is an independent branch of the Indo-European family of languages. Native to the southern Balkans, it has the longest documented history of any Indo-European language, spanning 34 centuries of written records. Its writing system has been the Greek alphabet for the majority of its history;...
Kaisar, not the German Kaiser.

In English, the term the Kaiser is usually reserved for the Emperors of the German Empire
German Empire
The German Empire refers to Germany during the "Second Reich" period from the unification of Germany and proclamation of Wilhelm I as German Emperor on 18 January 1871, to 1918, when it became a federal republic after defeat in World War I and the abdication of the Emperor, Wilhelm II.The German...
, the emperors of the Austrian Empire
Austrian Empire
The Austrian Empire was a modern era successor empire, which was centered on what is today's Austria and which officially lasted from 1804 to 1867. It was followed by the Empire of Austria-Hungary, whose proclamation was a diplomatic move that elevated Hungary's status within the Austrian Empire...
and those of the Austro-Hungarian Empire. During the First World War, the term the Kaiser — especially as applied to Wilhelm II of Germany
Germany
Germany , officially the Federal Republic of Germany , is a federal parliamentary republic in Europe. The country consists of 16 states while the capital and largest city is Berlin. Germany covers an area of 357,021 km2 and has a largely temperate seasonal climate...
— gained considerable pejorative connotations in English-speaking countries.


German history and antecedents of the title

The Holy Roman Emperors (962–1806) called themselves Kaiser, combining the imperial title with that of Roman King (assumed by the designated heir before the imperial coronation); they saw their rule as a continuation of that of the Roman Emperor
Roman Emperor
The Roman emperor was the ruler of the Roman State during the imperial period . The Romans had no single term for the office although at any given time, a given title was associated with the emperor...
s and used the title derived from the title Caesar
Caesar (title)
Caesar is a title of imperial character. It derives from the cognomen of Julius Caesar, the Roman dictator...
to reflect their supposed heritage.

In 1871, there was much debate about the exact title for the monarch of those German territories (such as free imperial cities, principalities, duchies, and kingdoms) that agreed to unify under the leadership of Prussia
Prussia
Prussia was a German kingdom and historic state originating out of the Duchy of Prussia and the Margraviate of Brandenburg. For centuries, the House of Hohenzollern ruled Prussia, successfully expanding its size by way of an unusually well-organized and effective army. Prussia shaped the history...
, thereby forming the German Empire. Deutscher Kaiser ("German Emperor") was chosen over alternatives such as Kaiser von Deutschland ("Emperor of Germany"), or Kaiser der Deutschen ("Emperor of the Germans"), as the chosen title simply connoted that the new emperor, hearkening from Prussia, was a German, but did not imply that this new emperor had dominion over all German territories. There have only been three Kaisers of the (second) German Empire. All of them belonged to the Hohenzollern dynasty, which, as kings of Prussia, had been de facto leaders of lesser Germany.

In English
English language
English is a West Germanic language that arose in the Anglo-Saxon kingdoms of England and spread into what was to become south-east Scotland under the influence of the Anglian medieval kingdom of Northumbria...
the (untranslated) word Kaiser is mainly associated with the emperors of the unified German Empire
German Empire
The German Empire refers to Germany during the "Second Reich" period from the unification of Germany and proclamation of Wilhelm I as German Emperor on 18 January 1871, to 1918, when it became a federal republic after defeat in World War I and the abdication of the Emperor, Wilhelm II.The German...
(1871–1918), in particular with Kaiser Wilhelm II, and with the emperors of Austria-Hungary, in particular with Kaiser Franz Joseph I
Franz Joseph I of Austria
Franz Joseph I or Francis Joseph I was Emperor of Austria, King of Bohemia, King of Croatia, Apostolic King of Hungary, King of Galicia and Lodomeria and Grand Duke of Cracow from 1848 until his death in 1916.In the December of 1848, Emperor Ferdinand I of Austria abdicated the throne as part of...
.