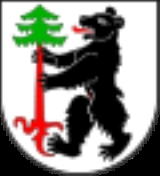 Encyclopedia
Zernez is a municipality
Municipalities of Switzerland
Communes , also known as municipalities, are the smallest government division in Switzerland, numbering 2,596 . While many have a population of a few hundred citizens, the largest cities such as Zürich or Geneva also have the legal status of municipalities...
in the district of Inn in the Swiss
Switzerland
Switzerland name of one of the Swiss cantons. ; ; ; or ), in its full name the Swiss Confederation , is a federal republic consisting of 26 cantons, with Bern as the seat of the federal authorities. The country is situated in Western Europe,Or Central Europe depending on the definition....
canton
Cantons of Switzerland
The 26 cantons of Switzerland are the member states of the federal state of Switzerland. Each canton was a fully sovereign state with its own borders, army and currency from the Treaty of Westphalia until the establishment of the Swiss federal state in 1848...
of Graubünden
Graubünden
Graubünden or Grisons is the largest and easternmost canton of Switzerland. The canton shares borders with the cantons of Ticino, Uri, Glarus and St. Gallen and international borders with Italy, Austria and Liechtenstein...
.

Zernez is a major node in the regional road network, with roads leading into the Upper Engadin and towards Italy
Italy
Italy , officially the Italian Republic languages]] under the European Charter for Regional or Minority Languages. In each of these, Italy's official name is as follows:;;;;;;;;), is a unitary parliamentary republic in South-Central Europe. To the north it borders France, Switzerland, Austria and...
, the Lower Engadin and towards Austria
Austria
Austria , officially the Republic of Austria , is a landlocked country of roughly 8.4 million people in Central Europe. It is bordered by the Czech Republic and Germany to the north, Slovakia and Hungary to the east, Slovenia and Italy to the south, and Switzerland and Liechtenstein to the...
, over the Fuorn Pass
Fuorn Pass
Fuorn Pass or Ofen Pass is a high alpine mountain pass in the canton of Graubünden in Switzerland. The name is based on the ovens that were used in ironworks in the area...
into the Val Mustair
Val Müstair
Val Müstair is a municipality in the district of Inn in the Swiss canton of Graubünden. It was formed on 1 January 2009 through the merger of Tschierv, Fuldera, Lü, Valchava, Santa Maria Val Müstair and Müstair.-Demographics:...
and over the Flüela Pass
Flüela Pass
Flüela Pass is a high mountain pass in the Swiss Alps in the canton of Graubünden. The pass road connects Davos and Susch in the lower Engadin valley.Since the Vereina Tunnel opened in 1999, the road is no longer open all year.-See also:...
. Zernez is the center for visitors of the Swiss National Park
Swiss National Park
The Swiss National Park is located in the canton of Graubünden in the east of Switzerland between Zernez, S-chanf, Scuol and the Fuorn Pass in the Engadin valley on the border with Italy....
(Romansh: Parc Naziunal).

Zernez is first mentioned in 1131 as Gumpo de Ernece. In 1161-64 it was mentioned as Zarnetz though both references are found in a copy of the document from 1365.

The municipality is located in the Sur Tasna sub-district of the Inn district along the Ofen Pass road into the Engadin
Engadin
The Engadin or Engadine is a long valley in the Swiss Alps located in the canton of Graubünden in southeast Switzerland. It follows the route of the Inn River from its headwaters at Maloja Pass running northeast until the Inn flows into Austria one hundred kilometers downstream...
. It consists of the village of Zernez and the section of Brail.

In Zernez about 72.5% of the population (between age 25-64) have completed either non-mandatory upper secondary education or additional higher education (either university or a Fachhochschule
Fachhochschule
A Fachhochschule or University of Applied Sciences is a German type of tertiary education institution, sometimes specialized in certain topical areas . Fachhochschulen were founded in Germany and later adopted by Austria, Liechtenstein, Switzerland and Greece...
).

Population increase due to railway construction

The castle was built in the 12th Century but was rebuilt into a baroque castle later. Since 1956 it has served as the town hall.

In addition to the four Swiss Heritage Sites of National Significance, Zernez has several other notable sites. These include the gothic
Gothic architecture
Gothic architecture is a style of architecture that flourished during the high and late medieval period. It evolved from Romanesque architecture and was succeeded by Renaissance architecture....
catholic
Roman Catholic Church
The Catholic Church, also known as the Roman Catholic Church, is the world's largest Christian church, with over a billion members. Led by the Pope, it defines its mission as spreading the gospel of Jesus Christ, administering the sacraments and exercising charity...
chapel of St. Sebastian, the Morenturm, the Swiss National Park and park house, the abandoned tower of La Serra and in Brail, a medieval
Middle Ages
The Middle Ages is a periodization of European history from the 5th century to the 15th century. The Middle Ages follows the fall of the Western Roman Empire in 476 and precedes the Early Modern Era. It is the middle period of a three-period division of Western history: Classic, Medieval and Modern...
Reformed church.

The chapel of St. Sebastian stopped being used as a catholic chapel following the Reformation. In 1952 it was put back into service as a chapel. The Morenturm is a medieval tower house
Tower house
A tower house is a particular type of stone structure, built for defensive purposes as well as habitation.-History:Tower houses began to appear in the Middle Ages, especially in mountain or limited access areas, in order to command and defend strategic points with reduced forces...
in the village. The Swiss National Park, , is the only National Park in Switzerland. It has an area of 174.2 km² (67.3 sq mi) and is the largest protected area of the country. It was one of the earliest national parks in Europe, being founded on 1 August 1914. The Nationalparkhaus in Zernez is a museum for the National Park. The tower of La Serra was built either in the 13th or 14th Century, though it could have been built as late as just before the Swabian War
Swabian War
The Swabian War of 1499 was the last major armed conflict between the Old Swiss Confederacy and the House of Habsburg...
in 1495. During the Bündner Wirren (or Confusion of the Leagues) it was reinforced and a regiment from Schauenstein was stationed there. After the Confusion, it was abandoned and fell into disrepair. In 1996–98 it was repaired and reinforced.
Schloss Planta-Wildenberg, Mittelalterlicher Wohnturm mit barocken Nebengebäuden.