The register contains mostly immobile items of cultural property such as old towns, quarters, squares, villages, sacral buildings, houses, castles, bridges, monuments, archaeological sites and collections. Its entries are classified in two groups: those of national significance (class A – some 1,800 entries) and those of regional significance (class B). The selection is based on the significance of the items in the domains of history
History
History is the discovery, collection, organization, and presentation of information about past events. History can also mean the period of time after writing was invented. Scholars who write about history are called historians...
, aesthetics
Aesthetics
Aesthetics is a branch of philosophy dealing with the nature of beauty, art, and taste, and with the creation and appreciation of beauty. It is more scientifically defined as the study of sensory or sensori-emotional values, sometimes called judgments of sentiment and taste...
, art
Art
Art is the product or process of deliberately arranging items in a way that influences and affects one or more of the senses, emotions, and intellect....
, typology
Typology
Typology is the study of types. More specifically, it may refer to:*Typology , division of culture by races*Typology , classification of things according to their characteristics...
, ethnography
Ethnography
Ethnography is a qualitative method aimed to learn and understand cultural phenomena which reflect the knowledge and system of meanings guiding the life of a cultural group...
, social studies and in other scientific disciplines, as well as on their rarity value. Items of purely local significance are not included; these may be registered separately by the cantonal authorities. 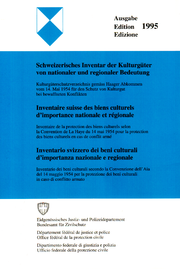