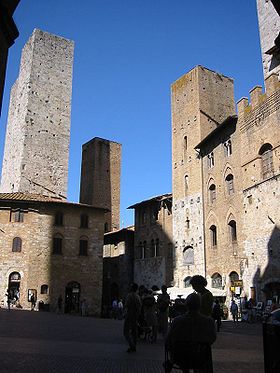 A tower house is a particular type of stone structure, built for defensive purposes as well as habitation.

Tower houses began to appear in the Middle Ages
Middle Ages
The Middle Ages is a periodization of European history from the 5th century to the 15th century. The Middle Ages follows the fall of the Western Roman Empire in 476 and precedes the Early Modern Era. It is the middle period of a three-period division of Western history: Classic, Medieval and Modern...
, especially in mountain or limited access areas, in order to command and defend strategic points with reduced forces. At the same time, they were also used as a noble's residence, around which a castleton was often constructed.

After their initial appearance in Ireland
Ireland
Ireland is an island to the northwest of continental Europe. It is the third-largest island in Europe and the twentieth-largest island on Earth...
, Scotland
Scotland
Scotland is a country that is part of the United Kingdom. Occupying the northern third of the island of Great Britain, it shares a border with England to the south and is bounded by the North Sea to the east, the Atlantic Ocean to the north and west, and the North Channel and Irish Sea to the...
, Basque Country and England
England
England is a country that is part of the United Kingdom. It shares land borders with Scotland to the north and Wales to the west; the Irish Sea is to the north west, the Celtic Sea to the south west, with the North Sea to the east and the English Channel to the south separating it from continental...
during the High Middle Ages
High Middle Ages
The High Middle Ages was the period of European history around the 11th, 12th, and 13th centuries . The High Middle Ages were preceded by the Early Middle Ages and followed by the Late Middle Ages, which by convention end around 1500....
, tower houses were also built in other parts of western Europe as early as the late 14th century, especially in parts of France
France
The French Republic , The French Republic , The French Republic , (commonly known as France , is a unitary semi-presidential republic in Western Europe with several overseas territories and islands located on other continents and in the Indian, Pacific, and Atlantic oceans. Metropolitan France...
and Italy
Italy
Italy , officially the Italian Republic languages]] under the European Charter for Regional or Minority Languages. In each of these, Italy's official name is as follows:;;;;;;;;), is a unitary parliamentary republic in South-Central Europe. To the north it borders France, Switzerland, Austria and...
. In Italian medieval commune
Medieval commune
Medieval communes in the European Middle Ages had sworn allegiances of mutual defense among the citizens of a town or city. They took many forms, and varied widely in organization and makeup. Communes are first recorded in the late 11th and early 12th centuries, thereafter becoming a widespread...
s, tower houses were increasingly built by the local barons as powerhouses during the inner strifes. 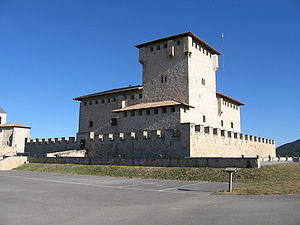 Tower houses are very commonly found in northern Spain
Spain
Spain , officially the Kingdom of Spain languages]] under the European Charter for Regional or Minority Languages. In each of these, Spain's official name is as follows:;;;;;;), is a country and member state of the European Union located in southwestern Europe on the Iberian Peninsula...
, especially in the Basque Country
Basque Country (autonomous community)
The Basque Country is an autonomous community of northern Spain. It includes the Basque provinces of Álava, Biscay and Gipuzkoa, also called Historical Territories....
, some of them dating back to the 8th century. They were mainly used as noble residences able to provide shelter against several enemies, starting with the Visigoths, the Arabs and then petty medieval wars. However, due to complex legal charters, not many of them had boroughs attached to them, and that is why they are usually found standing alone in some defensive spot, not typically a high position but a crossroad. Some of them survived well into the modern era, being even used as country residences by their traditional noble owners; for instance, Saint Ignatius of Loyola was born in one of them, still standing.

The Yemen
Yemen
The Republic of Yemen , commonly known as Yemen , is a country located in the Middle East, occupying the southwestern to southern end of the Arabian Peninsula. It is bordered by Saudi Arabia to the north, the Red Sea to the west, and Oman to the east....
i city of Shibam
Shibam
Shibam is a town in Yemen with about 7,000 inhabitants. The first known inscription about the city dates from the 3rd century AD...
has hundreds of tower houses which were the tallest in the world. There are also, for instance, numerous examples of tower houses in Georgia
Georgia (country)
Georgia is a sovereign state in the Caucasus region of Eurasia. Located at the crossroads of Western Asia and Eastern Europe, it is bounded to the west by the Black Sea, to the north by Russia, to the southwest by Turkey, to the south by Armenia, and to the southeast by Azerbaijan. The capital of...
in the Caucasus
Caucasus
The Caucasus, also Caucas or Caucasia , is a geopolitical region at the border of Europe and Asia, and situated between the Black and the Caspian sea...
, where there was a clanlike social structure (surviving here into the 19th or even 20th century) in a country where fierce competition over limited natural resources led to chronic feuding between neighbours. One theory suggests that private towerlike structures proliferate in areas where central authority is weak, leading to a need for a status symbol incorporating private defenses against small-scale attacks.

Similarly, hundreds of Tibetan tower houses
Himalayan Towers
The Himalayan Towers also called Stone star-shaped towers, are a series of stone towers located mostly in Kham, an ancient province of Tibet, in Sichuan and in Tibet. The towers are located in regions of Changthang, Gyalrong, Miniak and Kongpo. The towers can be found both in cities and in...
dot the so-called Tribal Corridor in Western Sichuan
Sichuan
' , known formerly in the West by its postal map spellings of Szechwan or Szechuan is a province in Southwest China with its capital in Chengdu...
, some 50 meters high with as many as 13 star-like points, and the oldest are thought to be 1,200 years old.
Scotland has many fine examples of medieval tower houses, including Crathes Castle
Crathes Castle
Crathes Castle is a 16th century castle near Banchory in the Aberdeenshire region of Scotland. This harled castle was built by the Burnetts of Leys and was held in that family for almost 400 years...
, Craigievar Castle
Craigievar Castle
Craigievar Castle is a pinkish harled castle six miles south of Alford, Aberdeenshire, Scotland. It was the seat of Clan Sempill. The setting is among scenic rolling foothills of the Grampian Mountains...
and Castle Fraser
Castle Fraser
Castle Fraser is the most elaborate Z-plan castle in Scotland and one of the grandest 'Castles of Mar'. It is located near Kemnay in the Aberdeenshire region of Scotland. The castle stands in over of landscaped grounds, woodland and farmland which includes a walled kitchen garden of the 19th...
, and in the unstable Scottish Marches
Scottish Marches
Scottish Marches was the term used for the Anglo-Scottish border during the late medieval and early modern eras—from the late 13th century, with the creation by Edward I of England of the first Lord Warden of the Marches to the early 17th century and the creation of the Middle Shires, promulgated...
along the border between England and Scotland the peel tower
Peel tower
Peel towers are small fortified keeps or tower houses, built along the English and Scottish borders in the Scottish Marches and North of England, intended as watch towers where signal fires could be lit by the garrison to warn of approaching danger...
was the typical residence of people of substance, with others being built by the government.

Tower houses can also be found in the Mani peninsula in southern Greece; again an area of scarce resources, poverty, spectacular feuding, long-lived vendettas, and a history of lawlessness and independence from central authority.

Most notable in the New World might be considered a focal element of the Mesa Verde Anasazi ruin in Colorado
Colorado
Colorado is a U.S. state that encompasses much of the Rocky Mountains as well as the northeastern portion of the Colorado Plateau and the western edge of the Great Plains...
, USA. There is a prominent structure at that site which is in fact called the "tower house" and has the general appearance characteristics of its counterparts in Britain and Ireland. This four-story building was constructed of adobe
Adobe
Adobe is a natural building material made from sand, clay, water, and some kind of fibrous or organic material , which the builders shape into bricks using frames and dry in the sun. Adobe buildings are similar to cob and mudbrick buildings. Adobe structures are extremely durable, and account for...
bricks about 1350 AD, and its rather well preserved ruins
Ruins
Ruins are the remains of human-made architecture: structures that were once complete, as time went by, have fallen into a state of partial or complete disrepair, due to lack of maintenance or deliberate acts of destruction...
are nestled within a cliff
Cliff
In geography and geology, a cliff is a significant vertical, or near vertical, rock exposure. Cliffs are formed as erosion landforms due to the processes of erosion and weathering that produce them. Cliffs are common on coasts, in mountainous areas, escarpments and along rivers. Cliffs are usually...
overhang; moreover, other accounts date this ruin somewhat earlier. The towers of the ancient Pueblo people are, however, both of smaller ground plan than Old World tower houses, and are generally only parts of complexes housing communities, rather than isolated structures housing an individual family and their retainers, as in Europe.