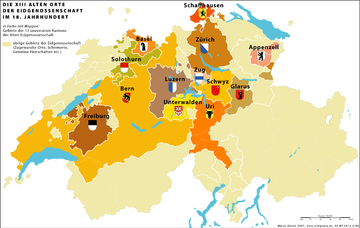 The 26 cantons of Switzerland are the member states of the federal state
Federation
A federation , also known as a federal state, is a type of sovereign state characterized by a union of partially self-governing states or regions united by a central government...
of Switzerland
Switzerland
Switzerland name of one of the Swiss cantons. ; ; ; or ), in its full name the Swiss Confederation , is a federal republic consisting of 26 cantons, with Bern as the seat of the federal authorities. The country is situated in Western Europe,Or Central Europe depending on the definition....
. Each canton was a fully sovereign
Sovereignty
Sovereignty is the quality of having supreme, independent authority over a geographic area, such as a territory. It can be found in a power to rule and make law that rests on a political fact for which no purely legal explanation can be provided...
state with its own borders, army and currency from the Treaty of Westphalia (1648) until the establishment of the Swiss federal state in 1848. The most recently created canton is the Canton of Jura
Canton of Jura
The Republic and Canton of the Jura , also known as the Canton of Jura or Canton Jura, is one of the cantons of Switzerland. It is the newest of the 26 Swiss cantons, located in the northwestern part of Switzerland. The capital is Delémont...
, which separated from the Canton of Bern in 1979.

The name is derived from the French language
French language
French is a Romance language spoken as a first language in France, the Romandy region in Switzerland, Wallonia and Brussels in Belgium, Monaco, the regions of Quebec and Acadia in Canada, and by various communities elsewhere. Second-language speakers of French are distributed throughout many parts...
word canton meaning corner or district (from which the term Cantonment
Cantonment
A cantonment is a temporary or semi-permanent military or police quarters. The word cantonment is derived from the French word canton meaning corner or district, as is the name of the Cantons of Switzerland. In South Asia, the term cantonment also describes permanent military stations...
is also derived).

In the sixteenth century, the Old Swiss Confederacy
Old Swiss Confederacy
The Old Swiss Confederacy was the precursor of modern-day Switzerland....
was composed of thirteen sovereign cantons, and there were two different kinds: six land (or forest) cantons and seven city (or urban) cantons. Though they were technically part of the Holy Roman Empire
Holy Roman Empire
The Holy Roman Empire was a realm that existed from 962 to 1806 in Central Europe.It was ruled by the Holy Roman Emperor. Its character changed during the Middle Ages and the Early Modern period, when the power of the emperor gradually weakened in favour of the princes...
, they had become de facto independent when the Swiss defeated
Battle of Dornach
The Battle of Dornach was a battle fought on 22 July 1499 between the troops of Emperor Maximilian I and the Old Swiss Confederacy close to the Swiss village of Dornach....
Emperor Maximillian
Maximilian I, Holy Roman Emperor
Maximilian I , the son of Frederick III, Holy Roman Emperor and Eleanor of Portugal, was King of the Romans from 1486 and Holy Roman Emperor from 1493 until his death, though he was never in fact crowned by the Pope, the journey to Rome always being too risky...
in 1499. The six forest cantons were democratic
Democracy
Democracy is generally defined as a form of government in which all adult citizens have an equal say in the decisions that affect their lives. Ideally, this includes equal participation in the proposal, development and passage of legislation into law...
republic
Republic
A republic is a form of government in which the people, or some significant portion of them, have supreme control over the government and where offices of state are elected or chosen by elected people. In modern times, a common simplified definition of a republic is a government where the head of...
s, whereas the seven urban cantons were oligarchic
Oligarchy
Oligarchy is a form of power structure in which power effectively rests with an elite class distinguished by royalty, wealth, family ties, commercial, and/or military legitimacy...
republics controlled by noble families.

Each canton has its own constitution
Constitution
A constitution is a set of fundamental principles or established precedents according to which a state or other organization is governed. These rules together make up, i.e. constitute, what the entity is...
, legislature
Legislature
A legislature is a kind of deliberative assembly with the power to pass, amend, and repeal laws. The law created by a legislature is called legislation or statutory law. In addition to enacting laws, legislatures usually have exclusive authority to raise or lower taxes and adopt the budget and...
, government
Government
Government refers to the legislators, administrators, and arbitrators in the administrative bureaucracy who control a state at a given time, and to the system of government by which they are organized...
and court
Court
A court is a form of tribunal, often a governmental institution, with the authority to adjudicate legal disputes between parties and carry out the administration of justice in civil, criminal, and administrative matters in accordance with the rule of law...
s. Most of the cantons' legislatures are unicameral
Unicameralism
In government, unicameralism is the practice of having one legislative or parliamentary chamber. Thus, a unicameral parliament or unicameral legislature is a legislature which consists of one chamber or house...
parliament
Parliament
A parliament is a legislature, especially in those countries whose system of government is based on the Westminster system modeled after that of the United Kingdom. The name is derived from the French , the action of parler : a parlement is a discussion. The term came to mean a meeting at which...
s, their size varying between fifty-eight and two hundred seats. A few legislatures are general assemblies known as Landsgemeinde
Landsgemeinde
The Landsgemeinde or "cantonal assembly" is one of the oldest forms of direct democracy. The first historically documented assembly took place in 1294...
n. The cantonal governments consist of either five or seven members, depending on the canton. For the names of the institutions, see List of legislative and executive councils of the Cantons of Switzerland.

The Swiss Federal Constitution
Swiss Federal Constitution
The Federal Constitution of 18 April 1999 is the third and current federal constitution of Switzerland. It establishes the Swiss Confederation as a federal republic of 26 cantons , contains a catalogue of individual and popular rights , delineates the responsibilities of the...
declares the cantons to be sovereign to the extent their sovereignty is not limited by federal law. The cantons also retain all powers and competencies not delegated to the Confederation by the Constitution. Most significantly, the cantons are responsible for healthcare
Health care
Health care is the diagnosis, treatment, and prevention of disease, illness, injury, and other physical and mental impairments in humans. Health care is delivered by practitioners in medicine, chiropractic, dentistry, nursing, pharmacy, allied health, and other care providers...
, welfare, law enforcement and public education
Public education
State schools, also known in the United States and Canada as public schools,In much of the Commonwealth, including Australia, New Zealand, South Africa, and the United Kingdom, the terms 'public education', 'public school' and 'independent school' are used for private schools, that is, schools...
; they also retain the power of tax
Tax
To tax is to impose a financial charge or other levy upon a taxpayer by a state or the functional equivalent of a state such that failure to pay is punishable by law. Taxes are also imposed by many subnational entities...
ation. The cantonal constitutions determine the degree of autonomy accorded to the municipalities
Municipality
A municipality is essentially an urban administrative division having corporate status and usually powers of self-government. It can also be used to mean the governing body of a municipality. A municipality is a general-purpose administrative subdivision, as opposed to a special-purpose district...
, which varies but almost always includes the power to levy taxes and pass municipal laws. The sizes of the cantons vary from 37 km² to 7,105 km²; the populations vary from 15,471 to 1,244,400.

As on the federal level, all cantons provide for (half-) direct democracy
Direct democracy
Direct democracy is a form of government in which people vote on policy initiatives directly, as opposed to a representative democracy in which people vote for representatives who then vote on policy initiatives. Direct democracy is classically termed "pure democracy"...
. Citizens may demand a popular vote to amend the cantonal constitution or laws, or to veto laws or spending bills passed by the parliament. General popular assemblies (Landsgemeinde
Landsgemeinde
The Landsgemeinde or "cantonal assembly" is one of the oldest forms of direct democracy. The first historically documented assembly took place in 1294...
) are now limited to the cantons of Appenzell Innerrhoden
Appenzell Innerrhoden
Appenzell Innerrhoden is the smallest canton of Switzerland by population and the second smallest by area, Basel-City having less area.-Foundation:...
and Glarus
Canton of Glarus
The Canton of Glarus is a canton in east central Switzerland. The capital is Glarus.The population speaks a variety of Alemannic German.The majority of the population identifies as Christian, about evenly split between the Protestant and Catholic confessions.-History:According to legend, the...
. In all other cantons democratic rights are exercised by secret ballot.

The cantons are listed in the order given in the federal constitution.


The two-letter abbreviations for Swiss cantons are widely used, e.g. on car license plates. They are also used in the ISO 3166-2 codes of Switzerland
ISO 3166-2:CH
ISO 3166-2:CH is the entry for Switzerland in ISO 3166-2, part of the ISO 3166 standard published by the International Organization for Standardization , which defines codes for the names of the principal subdivisions of all countries coded in ISO 3166-1.Currently for Switzerland, ISO 3166-2 codes...
with the prefix "CH-" (Confœderatio Helvetica, Switzerland), e.g. CH-SZ for the canton of Schwyz.

Six of the 26 cantons are traditionally, but no longer officially, called "half-cantons" , reflecting a history of mutual association or partition.

The 1999 constitutional revision retained this distinction, on the request of the six cantonal governments, as a way to mark the historic association of the half-cantons to each other. In contrast, the first article of the 1848 and 1874 constitutions constituted the Confederation as the union of "twenty-two sovereign cantons", referring to the half-cantons as "Unterwalden (above and beneath the woods)", "Basel (city and country)" and "Appenzell (both Rhoden)". While the older constitutions referred to these states as "half-cantons", a term that remains in popular use, the 1999 revision and official terminology since then use the appellation "cantons with half a cantonal vote".

With their mutual association a purely historical matter, the half-cantons are since 1848 equal to the other cantons in all but two respects:

The reasons for the association between the three pairs of half-cantons are varied:

(Names appear in bold when corresponding to the cantonal official language)

The enlargement of Switzerland by way of the admission of new cantons ended in 1815. After a failed attempt of Vorarlberg
Vorarlberg
Vorarlberg is the westernmost federal-state of Austria. Although it is the second smallest in terms of area and population , it borders three countries: Germany , Switzerland and Liechtenstein...
to join Switzerland in 1919, the idea of resuming Swiss enlargement was revived in 2010 by a parliamentary motion that would allow the accession of regions bordering on Switzerland.