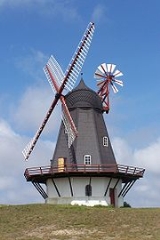 Encyclopedia
The Danish Wadden Sea Islands are a group of islands on the western coast of Jutland
Jutland
Jutland , historically also called Cimbria, is the name of the peninsula that juts out in Northern Europe toward the rest of Scandinavia, forming the mainland part of Denmark. It has the North Sea to its west, Kattegat and Skagerrak to its north, the Baltic Sea to its east, and the Danish–German...
, Denmark
Denmark
Denmark is a Scandinavian country in Northern Europe. The countries of Denmark and Greenland, as well as the Faroe Islands, constitute the Kingdom of Denmark . It is the southernmost of the Nordic countries, southwest of Sweden and south of Norway, and bordered to the south by Germany. Denmark...
. They belong to the new region
Regions of Denmark
The Regions of Denmark were created as part of the 2007 Danish Municipal Reform. The five regions replace the former sixteen counties . At the same time, the number of municipalities was cut from 270 to 98. The reform was made effective on 1 January 2007.- List of regions :The names of the regions...
of Southern Denmark since January 1, 2007. Previously they belonged to the counties
Counties of Denmark
Denmark was until December 31, 2006 divided into 15 counties , and 270 municipalities . On January 1, 2007, the counties were replaced by five Regions and the number of municipalities slashed to 98....
of South Jutland
South Jutland County
South Jutland County is a former county on the south-central portion of the Jutland Peninsula in southern Denmark....
and Ribe
Ribe County
Ribe Amt is a former county on the Jutland peninsula of southwest Denmark. It included Denmark's fifth largest city, Esbjerg. The county was abolished effective January 1, 2007, when it merged into Region of Southern Denmark .-List of County Mayors:-Municipalities :...
.

The Danish islands differ from the German
Germany
Germany , officially the Federal Republic of Germany , is a federal parliamentary republic in Europe. The country consists of 16 states while the capital and largest city is Berlin. Germany covers an area of 357,021 km2 and has a largely temperate seasonal climate...
North Frisian Islands
North Frisian Islands
The North Frisian Islands are a group of islands in the Wadden Sea, a part of the North Sea, off the western coast of Schleswig-Holstein, Germany. The German islands are in the traditional region of North Frisia and are part of the Schleswig-Holstein Wadden Sea National Park and the Kreis of...
because no Frisians
Frisians
The Frisians are a Germanic ethnic group native to the coastal parts of the Netherlands and Germany. They are concentrated in the Dutch provinces of Friesland and Groningen and, in Germany, East Frisia and North Frisia, that was a part of Denmark until 1864. They inhabit an area known as Frisia...
live on the Danish islands.

Fanø
Fanø
Fanø is a Danish island in the North Sea off the coast of southwestern Denmark, and is the very northernmost of the Danish Wadden Sea Islands...
is located just off Esbjerg
Esbjerg
Esbjerg Municipality is a municipality in Region of Southern Denmark on the west coast of the Jutland peninsula in southwest Denmark. Its mayor is Johnny Søtrup, from the Venstre political party...
to which it is connected by a ferry. The main towns on Fanø are Nordby and Sønderho. Other towns include Fanø Vesterhavsbad and Rindby. The island is 16 km long and 5 km wide, and has an area of 56 km². As of 2005, about 3,169 people live there. A variety of environments is to be found on Fanø. Not surprisingly, a very common one is sand. The island's whole western shore is made up of beaches, and the sea off the island's northwest end is also home to the "Søren-Jessens-Sand", a vast sandbank. Fanø also has heath
Heath (habitat)
A heath or heathland is a dwarf-shrub habitat found on mainly low quality acidic soils, characterised by open, low growing woody vegetation, often dominated by plants of the Ericaceae. There are some clear differences between heath and moorland...
and a small pine
Pine
Pines are trees in the genus Pinus ,in the family Pinaceae. They make up the monotypic subfamily Pinoideae. There are about 115 species of pine, although different authorities accept between 105 and 125 species.-Etymology:...
wood.

Mandø
Mandø
Mandø is one of the Danish Wadden Sea islands off the southwest coast of Jutland, Denmark in the Wadden Sea, part of the North Sea. The island covers an area of 7.63 km² and has 62 inhabitants...
is a smaller island farther south, a bit farther from the mainland. It is Denmark's only Hallig
Hallig
The Halligen are ten small German islands without protective dikes in the North Frisian Islands on Schleswig-Holstein's Wadden Sea-North Sea coast in the district of Nordfriesland....
, being much like the islands bearing that description among the German islands. A dike on Mandø keeps the sea at bay. Much of the islanders' history involve efforts to reclaim parts of their island from the sea.

Rømø
Rømø
Rømø is a Danish island in the Wadden Sea. Rømø is part of Tønder municipality. The island has 650 inhabitants as of 1 January 2011 and covers an area of 129 km². Rømø is a popular tourist spot each year....
is currently the southernmost of Denmark's Wadden Sea Islands (a small uninhabited one called Jordsand
Jordsand
Jordsand was a small Danish hallig located in the Wadden Sea southeast of the Danish island Rømø and east of the German island Sylt. The island was first known by the name Hiortsand and was possibly connected to both the mainland and the island of Sylt...
was farther south, but sank in 1999, leaving behind only a sandbank). Rømø is linked to the Danish mainland by a road running across a causeway, and the island also lies only about 3 km from its German neighbour Sylt
Sylt
Sylt is an island in northern Germany, part of Nordfriesland district, Schleswig-Holstein, and well known for the distinctive shape of its shoreline. It belongs to the North Frisian Islands and is the largest island in North Frisia...
, to which it is connected by ferry. It is home to a number of small communities such as Kongsmark, Østerby, Lakolk, and Sønderstrand.

Jordsand
Jordsand
Jordsand was a small Danish hallig located in the Wadden Sea southeast of the Danish island Rømø and east of the German island Sylt. The island was first known by the name Hiortsand and was possibly connected to both the mainland and the island of Sylt...
and Koresand
Koresand
Koresand is a sandbank in the Danish part of the Wadden Sea, south west of the island of Mandø. There was at least one settlement on Koresand until the frequent storm tides during the 1900s led to its being abandoned. In summer it is possible to travel from Mandø to Koresand by a tractor-drawn wagon....
are two sandbanks in the Danish Wadden Sea
Wadden Sea
The Wadden Sea is an intertidal zone in the southeastern part of the North Sea. It lies between the coast of northwestern continental Europe and the range of Frisian Islands, forming a shallow body of water with tidal flats and wetlands. It is rich in biological diversity...
. Jordsand is a former hallig
Hallig
The Halligen are ten small German islands without protective dikes in the North Frisian Islands on Schleswig-Holstein's Wadden Sea-North Sea coast in the district of Nordfriesland....
.
The source of this article is wikipedia, the free encyclopedia.  The text of this article is licensed under the GFDL.