Volcanism is the phenomenon connected with volcano
Volcano
2. Bedrock3. Conduit 4. Base5. Sill6. Dike7. Layers of ash emitted by the volcano8. Flank| 9. Layers of lava emitted by the volcano10. Throat11. Parasitic cone12. Lava flow13. Vent14. Crater15...
es and volcanic activity. It includes all phenomena resulting from and causing magma
Magma
Magma is a mixture of molten rock, volatiles and solids that is found beneath the surface of the Earth, and is expected to exist on other terrestrial planets. Besides molten rock, magma may also contain suspended crystals and dissolved gas and sometimes also gas bubbles. Magma often collects in...
within the crust
Crust (geology)
In geology, the crust is the outermost solid shell of a rocky planet or natural satellite, which is chemically distinct from the underlying mantle...
or mantle
Mantle (geology)
The mantle is a part of a terrestrial planet or other rocky body large enough to have differentiation by density. The interior of the Earth, similar to the other terrestrial planets, is chemically divided into layers. The mantle is a highly viscous layer between the crust and the outer core....
of a planet to rise through the crust and form volcanic rock
Volcanic rock
Volcanic rock is a rock formed from magma erupted from a volcano. In other words, it is an igneous rock of volcanic origin...
s on the surface.

Magma from the planet's mantle rises through the planet's crust, if the magma from the mantle reaches the planet's surface it behaves differently depending on the viscosity
Viscosity
Viscosity is a measure of the resistance of a fluid which is being deformed by either shear or tensile stress. In everyday terms , viscosity is "thickness" or "internal friction". Thus, water is "thin", having a lower viscosity, while honey is "thick", having a higher viscosity...
of the molten
Mölten
Mölten is a comune in South Tyrol in the Italian region Trentino-Alto Adige/Südtirol, located about 60 km north of Trento and about 12 km northwest of Bolzano .-Geography:...
constituent rock
Rock (geology)
In geology, rock or stone is a naturally occurring solid aggregate of minerals and/or mineraloids.The Earth's outer solid layer, the lithosphere, is made of rock. In general rocks are of three types, namely, igneous, sedimentary, and metamorphic...
. Viscous (thick) magma produces volcanoes characterised by explosive eruption
Explosive eruption
An explosive eruption is a volcanic term to describe a violent, explosive type of eruption. Mount St. Helens in 1980 was an example. Such an eruption is driven by gas accumulating under great pressure. Driven by hot rising magma, it interacts with ground water until the pressure increases to the...
s, while non viscous (runny) magma produce volcanoes characterised by an effusive eruption
Effusive eruption
An effusive eruption is a volcanic eruption characterized by the outpouring of lava onto the ground...
s pouring large amounts of Lava
Lava
Lava refers both to molten rock expelled by a volcano during an eruption and the resulting rock after solidification and cooling. This molten rock is formed in the interior of some planets, including Earth, and some of their satellites. When first erupted from a volcanic vent, lava is a liquid at...
onto the surface.

In some cases, rising magma can cool and solidify without reaching the surface of a planet. Instead, the cooled and solidified igneous mass freezes within the crust
Crust (geology)
In geology, the crust is the outermost solid shell of a rocky planet or natural satellite, which is chemically distinct from the underlying mantle...
of a planet to form an igneous intrusion
Intrusion
An intrusion is liquid rock that forms under Earth's surface. Magma from under the surface is slowly pushed up from deep within the earth into any cracks or spaces it can find, sometimes pushing existing country rock out of the way, a process that can take millions of years. As the rock slowly...
. 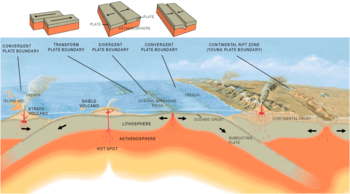 Movement of molten rock in the planet's mantle, caused by thermal convection
Convection
Convection is the movement of molecules within fluids and rheids. It cannot take place in solids, since neither bulk current flows nor significant diffusion can take place in solids....
currents, coupled with gravitational effects
Isostasy
Isostasy is a term used in geology to refer to the state of gravitational equilibrium between the earth's lithosphere and asthenosphere such that the tectonic plates "float" at an elevation which depends on their thickness and density. This concept is invoked to explain how different topographic...
of changes on the earth's surface (erosion
Erosion
Erosion is when materials are removed from the surface and changed into something else. It only works by hydraulic actions and transport of solids in the natural environment, and leads to the deposition of these materials elsewhere...
, deposition, even asteroid
Asteroid
Asteroids are a class of small Solar System bodies in orbit around the Sun. They have also been called planetoids, especially the larger ones...
impact and patterns of snow fall and melt
Post-glacial rebound
Post-glacial rebound is the rise of land masses that were depressed by the huge weight of ice sheets during the last glacial period, through a process known as isostasy...
) drive plate tectonic motion and ultimately volcanism.


Volcanoes are places where magma reaches the earth's surface.
The type of volcano depends on the location of the eruption and the consistency of the magma.

These are formed where magma pushes between existing rock, intrusions can be in the form of batholith
Batholith
A batholith is a large emplacement of igneous intrusive rock that forms from cooled magma deep in the Earth's crust...
s, dikes
Dike (geology)
A dike or dyke in geology is a type of sheet intrusion referring to any geologic body that cuts discordantly across* planar wall rock structures, such as bedding or foliation...
, sills
Sill (geology)
In geology, a sill is a tabular sheet intrusion that has intruded between older layers of sedimentary rock, beds of volcanic lava or tuff, or even along the direction of foliation in metamorphic rock. The term sill is synonymous with concordant intrusive sheet...
and layered intrusions.

These are formed where water interacts with volcanism.
These include Geysers, Fumaroles, Hotsprings and Mudpot
Mudpot
A mudpot, mud pool or paint pot is a sort of hot spring or fumarole consisting of a pool of usually bubbling mud. The mud is generally of white to greyish color, but is sometimes stained with reddish or pink spots from iron compounds...
s, they are often used as a source of geothermal energy.

The amount of gas and ash emitted by volcanic eruptions has a significant effect on the planet's climate. Large eruptions correlate well with some significant climate change events.

When the magma cools it crystallises and forms rocks, the type of rock formed depends on the chemical composition of the magma and how rapidly the magma cools.
Magma that reaches the surface to become lava cools rapidly resulting in rocks with small crystals such as basalt
Basalt
Basalt is a common extrusive volcanic rock. It is usually grey to black and fine-grained due to rapid cooling of lava at the surface of a planet. It may be porphyritic containing larger crystals in a fine matrix, or vesicular, or frothy scoria. Unweathered basalt is black or grey...
.
Magma that remains trapped below ground in thin intrusions cools slower than magma exposed to the surface and produces rocks with medium sized crystals.
Magma that remains trapped in large quantities below ground cools most slowly resulting in rocks with larger crystals - such as granite
Granite
Granite is a common and widely occurring type of intrusive, felsic, igneous rock. Granite usually has a medium- to coarse-grained texture. Occasionally some individual crystals are larger than the groundmass, in which case the texture is known as porphyritic. A granitic rock with a porphyritic...
and gabbro
Gabbro
Gabbro refers to a large group of dark, coarse-grained, intrusive mafic igneous rocks chemically equivalent to basalt. The rocks are plutonic, formed when molten magma is trapped beneath the Earth's surface and cools into a crystalline mass....

Existing rocks that come into contact with Magma are often melted by the heat, those that do not come into direct contact with the magma do not melt fully but retain some of their original structure - this process results in changes to the structure of the original rocks changing them so much they become a new type of rock - metamorphic rocks.


Volcanism on other planets

Volcanism is not confined only to Earth, but is thought to be found on any planet which has a solid crust and molten (liquid) mantle. And so its effects should still be found on any planet that has had volcanism at some point in its history. Volcanoes have indeed been clearly observed on other bodies in the solar system; on some, such as Mars
Mars
Mars is the fourth planet from the Sun in the Solar System. The planet is named after the Roman god of war, Mars. It is often described as the "Red Planet", as the iron oxide prevalent on its surface gives it a reddish appearance...
, in the shape of mountains that are unmistakably old volcanoes (most notably Olympus Mons
Olympus Mons
Olympus Mons is a large volcanic mountain on the planet Mars. At a height of almost , it is one of the tallest mountains in the Solar System, three times as tall as Mount Everest and more than twice the height of Mauna Kea the tallest mountain on Earth. Olympus Mons is the youngest of the large...
), but on Io
Volcanism on Io
Volcanism on Io, a moon of Jupiter, produces lava flows, volcanic pits, and plumes of sulfur and sulfur dioxide hundreds of kilometres high. This volcanic activity was discovered in 1979 by Voyager 1 imaging scientists...
actual ongoing eruptions have been observed. It can be surmised that volcanism exists on planets and moons of this type in other solar systems as well.