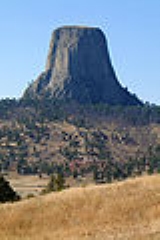 An intrusion is liquid rock that forms under Earth's surface. Magma
Magma
Magma is a mixture of molten rock, volatiles and solids that is found beneath the surface of the Earth, and is expected to exist on other terrestrial planets. Besides molten rock, magma may also contain suspended crystals and dissolved gas and sometimes also gas bubbles. Magma often collects in...
from under the surface is slowly pushed up from deep within the earth into any cracks or spaces it can find, sometimes pushing existing country rock
Country rock (geology)
Country rock is a geological term meaning the rock native to an area. It is similar and in many cases interchangeable with the terms basement and wall rocks....
out of the way, a process that can take millions of years. As the rock slowly cools into a solid, the different parts of the magma crystallize into minerals. Many mountain ranges, such as the Sierra Nevada in California, are formed mostly by intrusive rock, large granite (or related rock) formations.

Intrusions vary widely, from mountain range sized batholith
Batholith
A batholith is a large emplacement of igneous intrusive rock that forms from cooled magma deep in the Earth's crust...
s to thin vein
Vein (geology)
In geology, a vein is a distinct sheetlike body of crystallized minerals within a rock. Veins form when mineral constituents carried by an aqueous solution within the rock mass are deposited through precipitation...
-like fracture fillings of aplite
Aplite
Aplite in petrology, the name given to intrusive rock in which quartz and feldspar are the dominant minerals. Aplites are usually very fine-grained, white, grey or pinkish, and their constituents are visible only with the help of a magnifying lens...
or pegmatite
Pegmatite
A pegmatite is a very crystalline, intrusive igneous rock composed of interlocking crystals usually larger than 2.5 cm in size; such rocks are referred to as pegmatitic....
. When exposed by erosion
Erosion
Erosion is when materials are removed from the surface and changed into something else. It only works by hydraulic actions and transport of solids in the natural environment, and leads to the deposition of these materials elsewhere...
, these cores called batholiths may occupy huge areas of Earth
Earth
Earth is the third planet from the Sun, and the densest and fifth-largest of the eight planets in the Solar System. It is also the largest of the Solar System's four terrestrial planets...
's surface. Large bodies of magma that solidify underground before they reach the surface of the crust are called pluton
Pluton
A pluton in geology is a body of intrusive igneous rock that crystallized from magma slowly cooling below the surface of the Earth. Plutons include batholiths, dikes, sills, laccoliths, lopoliths, and other igneous bodies...
s.

Coarse grained intrusive igneous rocks that form at depth within the earth are called abyssal while those that form near the surface are called hypabyssal. Intrusive structures are often classified according to whether or not they are parallel to the bedding plane
Stratum
In geology and related fields, a stratum is a layer of sedimentary rock or soil with internally consistent characteristics that distinguish it from other layers...
s or foliation
Foliation (geology)
Foliation is any penetrative planar fabric present in rocks. Foliation is common to rocks affected by regional metamorphic compression typical of orogenic belts. Rocks exhibiting foliation include the standard sequence formed by the prograde metamorphism of mudrocks; slate, phyllite, schist and...
of the country rock: if the intrusion is parallel the body is concordant, otherwise it is discordant.

A well-known example of an intrusion is Devil's Tower
Devils Tower National Monument
Devils Tower is an igneous intrusion or laccolith located in the Black Hills near Hulett and Sundance in Crook County, northeastern Wyoming, above the Belle Fourche River...
.

Intrusions can be classified according to the shape and size of the intrusive body and its relation to the other formations into which it intrudes:

Batholith
Batholith
A batholith is a large emplacement of igneous intrusive rock that forms from cooled magma deep in the Earth's crust...
: a large irregular discordant intrusion
Dike
Dike (geology)
A dike or dyke in geology is a type of sheet intrusion referring to any geologic body that cuts discordantly across* planar wall rock structures, such as bedding or foliation...
: a relatively narrow tabular discordant body, often nearly vertical
Laccolith
Laccolith
A laccolith is a sheet intrusion that has been injected between two layers of sedimentary rock. The pressure of the magma is high enough that the overlying strata are forced upward, giving the laccolith a dome or mushroom-like form with a generally planar base.Laccoliths tend to form at relatively...
: concordant body with roughly flat base and convex top, usually with a feeder pipe below
Lopolith
Lopolith
A lopolith is a large igneous intrusion which is lenticular in shape with a depressed central region. Lopoliths are generally concordant with the intruded strata with dike or funnel-shaped feeder bodies below the body...
: concordant body with roughly flat top and a shallow convex base, may have a feeder dike or pipe below
Phacolith
Phacolith
A phacolith is a pluton parallel to the bedding plane or foliation of folded country rock. More specifically, it is a typically lens-shaped pluton that occupies either the crest of an anticline or the trough of a syncline. In rare cases the body may extend as a sill from the crest of an anticline...
: a concordant lens-shaped pluton that typically occupies the crest of an anticline
Anticline
In structural geology, an anticline is a fold that is convex up and has its oldest beds at its core. The term is not to be confused with antiform, which is a purely descriptive term for any fold that is convex up. Therefore if age relationships In structural geology, an anticline is a fold that is...
or trough of a syncline
Syncline
In structural geology, a syncline is a fold, with younger layers closer to the center of the structure. A synclinorium is a large syncline with superimposed smaller folds. Synclines are typically a downward fold, termed a synformal syncline In structural geology, a syncline is a fold, with younger...
Volcanic pipe
Volcanic pipe
Volcanic pipes are subterranean geological structures formed by the violent, supersonic eruption of deep-origin volcanoes. They are considered to be a type of diatreme. Volcanic pipes are composed of a deep, narrow cone of solidified magma , and are usually largely composed of one of two...
or volcanic neck: tubular roughly vertical body that may have been a feeder vent for a volcano
Volcano
2. Bedrock3. Conduit 4. Base5. Sill6. Dike7. Layers of ash emitted by the volcano8. Flank| 9. Layers of lava emitted by the volcano10. Throat11. Parasitic cone12. Lava flow13. Vent14. Crater15...
Sill
Sill (geology)
In geology, a sill is a tabular sheet intrusion that has intruded between older layers of sedimentary rock, beds of volcanic lava or tuff, or even along the direction of foliation in metamorphic rock. The term sill is synonymous with concordant intrusive sheet...
: a relatively thin tabular concordant body intruded along bedding planes
Stock: a smaller irregular discordant intrusion

Deep-seated intrusions are recognized from the way they have burst through the overlaying strata
Stratum
In geology and related fields, a stratum is a layer of sedimentary rock or soil with internally consistent characteristics that distinguish it from other layers...
. Ramifying veins result from filled cracks, and the high temperature involved in this process is evident from the altered adjacent country rock. Since heat dissipates slowly and since the rock is under pressure, crystals form and no vitreous
Glass
Glass is an amorphous solid material. Glasses are typically brittle and optically transparent.The most familiar type of glass, used for centuries in windows and drinking vessels, is soda-lime glass, composed of about 75% silica plus Na2O, CaO, and several minor additives...
rapidly chilled matter is present. As the intrusions have had time to rest before crystallizing, they are not fluidal. Their contained gases have not been able to escape through the thick layer of strata, beneath which they were injected. Such gases form cavities, which can often be observed in these minerals. Such gases have also resulted in many important modifications in the crystallization of the rock. Because their crystals are of approximately equal size these rocks are said to be granular.

There is typically no distinction between a first generation of large well-shaped crystals and a fine-grained ground-mass. The minerals of each have formed in a definite order, and each has had a period of crystallization that may be very distinct or may have coincided with or overlapped the period of formation of some of the other ingredients. Earlier crystals originated at a time when most of the rock was still liquid and are more or less perfect. Later crystals are less regular in shape because they were compelled to occupy the spaces left between the already-formed crystals. The former case is said to be idiomorphic (or automorphic); the latter is xenomorphic. There are also many other characteristics that serve to distinguish the members of these two groups. For example, orthoclase
Orthoclase
Orthoclase is an important tectosilicate mineral which forms igneous rock. The name is from the Greek for "straight fracture," because its two cleavage planes are at right angles to each other. Alternate names are alkali feldspar and potassium feldspar...
is typically feldspar
Feldspar
Feldspars are a group of rock-forming tectosilicate minerals which make up as much as 60% of the Earth's crust....
from granite
Granite
Granite is a common and widely occurring type of intrusive, felsic, igneous rock. Granite usually has a medium- to coarse-grained texture. Occasionally some individual crystals are larger than the groundmass, in which case the texture is known as porphyritic. A granitic rock with a porphyritic...
, while its modifications occur in lavas of similar composition. The same distinction holds for nepheline
Nepheline
Nepheline, also called nephelite , is a feldspathoid: a silica-undersaturated aluminosilicate, Na3KAl4Si4O16, that occurs in intrusive and volcanic rocks with low silica, and in their associated pegmatites...
varieties. Leucite
Leucite
Leucite is a rock-forming mineral composed of potassium and aluminium tectosilicate K[AlSi2O6]. Crystals have the form of cubic icositetrahedra but, as first observed by Sir David Brewster in 1821, they are not optically isotropic, and are therefore pseudo-cubic. Goniometric measurements made by...
is common in lavas but very rare in plutonic rocks. Muscovite
Muscovite
Muscovite is a phyllosilicate mineral of aluminium and potassium with formula KAl22, or 236. It has a highly-perfect basal cleavage yielding remarkably-thin laminæ which are often highly elastic...
is confined to intrusions. These differences show the influence of the physical conditions under which consolidation takes place.

Some intrusive rocks solidified in fissures as dikes and intrusive sills at a shallow depth beneath the surface and are called hypabyssal. Those formed at greater depths are called plutonic or abyssal. As might be expected, they show structures intermediate between those of extrusive and plutonic rocks. They are very commonly porphyritic
Porphyritic
Porphyritic is an adjective used in geology, specifically for igneous rocks, for a rock that has a distinct difference in the size of the crystals, with at least one group of crystals obviously larger than another group...
, vitreous
Glass
Glass is an amorphous solid material. Glasses are typically brittle and optically transparent.The most familiar type of glass, used for centuries in windows and drinking vessels, is soda-lime glass, composed of about 75% silica plus Na2O, CaO, and several minor additives...
, and sometimes even vesicular
Vesicular texture
Vesicular texture is a volcanic rock texture characterised by a rock being pitted with many cavities at its surface and inside. The texture is often found in extrusive aphanitic, or glassy, igneous rock...
. In fact, many of them are petrologically
Petrology
Petrology is the branch of geology that studies rocks, and the conditions in which rocks form....
indistinguishable from lavas of similar composition.
The source of this article is wikipedia, the free encyclopedia.  The text of this article is licensed under the GFDL.