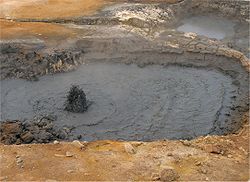 A mudpot, mud pool or paint pot is a sort of hot spring
Hot spring
A hot spring is a spring that is produced by the emergence of geothermally heated groundwater from the Earth's crust. There are geothermal hot springs in many locations all over the crust of the earth.-Definitions:...
or fumarole
Fumarole
A fumarole is an opening in a planet's crust, often in the neighborhood of volcanoes, which emits steam and gases such as carbon dioxide, sulfur dioxide, hydrochloric acid, and hydrogen sulfide. The steam is created when superheated water turns to steam as its pressure drops when it emerges from...
consisting of a pool of usually bubbling mud. The mud is generally of white to greyish color, but is sometimes stained with reddish or pink spots from iron
Iron
Iron is a chemical element with the symbol Fe and atomic number 26. It is a metal in the first transition series. It is the most common element forming the planet Earth as a whole, forming much of Earth's outer and inner core. It is the fourth most common element in the Earth's crust...
compounds. When the slurry is particularly colorful, the feature is then called a paint pot.

Mudpots form in high-temperature geothermal areas where water is in short supply. The little water that is available rises to the surface at a spot where the soil is rich in volcanic ash, clay
Clay
Clay is a general term including many combinations of one or more clay minerals with traces of metal oxides and organic matter. Geologic clay deposits are mostly composed of phyllosilicate minerals containing variable amounts of water trapped in the mineral structure.- Formation :Clay minerals...
and other fine particulates. The thickness of the mud usually changes along with seasonal changes in the water table
Water table
The water table is the level at which the submarine pressure is far from atmospheric pressure. It may be conveniently visualized as the 'surface' of the subsurface materials that are saturated with groundwater in a given vicinity. However, saturated conditions may extend above the water table as...
.

The mud takes the form of a viscous
Viscosity
Viscosity is a measure of the resistance of a fluid which is being deformed by either shear or tensile stress. In everyday terms , viscosity is "thickness" or "internal friction". Thus, water is "thin", having a lower viscosity, while honey is "thick", having a higher viscosity...
, often bubbling, slurry
Slurry
A slurry is, in general, a thick suspension of solids in a liquid.-Examples of slurries:Examples of slurries include:* Lahars* A mixture of water and cement to form concrete* A mixture of water, gelling agent, and oxidizers used as an explosive...
. As the boiling mud is often squirted over the brims of the mudpot, a sort of mini-volcano of mud starts to build up, sometimes reaching heights of 3–5 feet. Although mudpots are often called mud volcanoes, true mud volcano
Mud volcano
The term mud volcano or mud dome are used to refer to formations created by geo-excreted liquids and gases, although there are several different processes which may cause such activity. Hot water mixes with mud and surface deposits. Mud volcanoes are associated with subduction zones and about 700...
es are very different in nature.

The geothermal areas of Yellowstone
Geothermal areas of Yellowstone
The geothermal areas of Yellowstone include several geyser basins in Yellowstone National Park as well as other geothermal features such as hot springs, mud pots, and fumaroles...
National Park contain several notable examples of both mudpots and paint pots, as do some areas of Iceland
Iceland
Iceland , described as the Republic of Iceland, is a Nordic and European island country in the North Atlantic Ocean, on the Mid-Atlantic Ridge. Iceland also refers to the main island of the country, which contains almost all the population and almost all the land area. The country has a population...
and New Zealand
New Zealand
New Zealand is an island country in the south-western Pacific Ocean comprising two main landmasses and numerous smaller islands. The country is situated some east of Australia across the Tasman Sea, and roughly south of the Pacific island nations of New Caledonia, Fiji, and Tonga...
.
The source of this article is wikipedia, the free encyclopedia.  The text of this article is licensed under the GFDL.