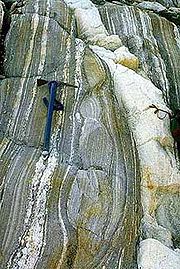 A dike or dyke in geology
Geology
Geology is the science comprising the study of solid Earth, the rocks of which it is composed, and the processes by which it evolves. Geology gives insight into the history of the Earth, as it provides the primary evidence for plate tectonics, the evolutionary history of life, and past climates...
is a type of sheet intrusion
Sheet intrusion
A sheet intrusion is where a mass of molten magma takes advantage of a pre-existing linear feature in a host rock, such as a long rupture or fault, and forces its way into these spaces...
referring to any geologic body that cuts discordantly across

Dikes can therefore be either intrusive or sediment
Sediment
Sediment is naturally occurring material that is broken down by processes of weathering and erosion, and is subsequently transported by the action of fluids such as wind, water, or ice, and/or by the force of gravity acting on the particle itself....
ary in origin.


An intrusive dike is an igneous body with a very high aspect ratio
Aspect ratio
The aspect ratio of a shape is the ratio of its longer dimension to its shorter dimension. It may be applied to two characteristic dimensions of a three-dimensional shape, such as the ratio of the longest and shortest axis, or for symmetrical objects that are described by just two measurements,...
, which means that its thickness is usually much smaller than the other two dimensions. Thickness can vary from sub-centimetre scale to many metres, and the lateral dimensions can extend over many kilometres. A dike is an intrusion into an opening cross-cutting fissure
Fissure vent
A fissure vent, also known as a volcanic fissure or simply fissure, is a linear volcanic vent through which lava erupts, usually without any explosive activity. The vent is usually a few meters wide and may be many kilometers long. Fissure vents can cause large flood basalts and lava channels...
, shouldering aside other pre-existing layers or bodies of rock; this implies that a dike is always younger than the rocks that contain it. Dikes are usually high angle to near vertical in orientation, but subsequent tectonic deformation may rotate the sequence of strata through which the dike propagates so that the latter becomes horizontal. Near horizontal, or conformable intrusions, along bedding planes between strata
Stratum
In geology and related fields, a stratum is a layer of sedimentary rock or soil with internally consistent characteristics that distinguish it from other layers...
are called intrusive sills
Sill (geology)
In geology, a sill is a tabular sheet intrusion that has intruded between older layers of sedimentary rock, beds of volcanic lava or tuff, or even along the direction of foliation in metamorphic rock. The term sill is synonymous with concordant intrusive sheet...
. 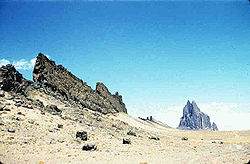 Dikes often form as either radial or concentric swarms around plutonic intrusives, volcanic necks or feeder vents in volcanic cone
Volcanic cone
Volcanic cones are among the simplest volcanic formations. They are built by ejecta from a volcanic vent, piling up around the vent in the shape of a cone with a central crater. Volcanic cones are of different types, depending upon the nature and size of the fragments ejected during the eruption...
s. The latter are known as ring dike
Ring dike
A ring dike or ring dyke in geology refers to an intrusive igneous body. Their chemistry, petrology and field appearance precisely match those of dikes or sill, but their concentric or radial geometric distribution around a centre of volcanic activity indicates their subvolcanic origins.-Notable...
s.

Dikes can vary in texture and their composition can range from diabase
Diabase
Diabase or dolerite is a mafic, holocrystalline, subvolcanic rock equivalent to volcanic basalt or plutonic gabbro. In North American usage, the term diabase refers to the fresh rock, whilst elsewhere the term dolerite is used for the fresh rock and diabase refers to altered material...
or basalt
Basalt
Basalt is a common extrusive volcanic rock. It is usually grey to black and fine-grained due to rapid cooling of lava at the surface of a planet. It may be porphyritic containing larger crystals in a fine matrix, or vesicular, or frothy scoria. Unweathered basalt is black or grey...
ic to granitic
Granite
Granite is a common and widely occurring type of intrusive, felsic, igneous rock. Granite usually has a medium- to coarse-grained texture. Occasionally some individual crystals are larger than the groundmass, in which case the texture is known as porphyritic. A granitic rock with a porphyritic...
or rhyolitic
Rhyolite
This page is about a volcanic rock. For the ghost town see Rhyolite, Nevada, and for the satellite system, see Rhyolite/Aquacade.Rhyolite is an igneous, volcanic rock, of felsic composition . It may have any texture from glassy to aphanitic to porphyritic...
, but on a global perspective the basaltic composition prevails, manifesting ascent of vast volumes of mantle-derived magmas through fractured lithosphere
Lithosphere
The lithosphere is the rigid outermost shell of a rocky planet. On Earth, it comprises the crust and the portion of the upper mantle that behaves elastically on time scales of thousands of years or greater.- Earth's lithosphere :...
throughout Earth history. Pegmatite
Pegmatite
A pegmatite is a very crystalline, intrusive igneous rock composed of interlocking crystals usually larger than 2.5 cm in size; such rocks are referred to as pegmatitic....
dikes are extremely coarse crystalline granitic rocks often associated with late-stage granite intrusions or metamorphic
Metamorphic rock
Metamorphic rock is the transformation of an existing rock type, the protolith, in a process called metamorphism, which means "change in form". The protolith is subjected to heat and pressure causing profound physical and/or chemical change...
segregations. Aplite
Aplite
Aplite in petrology, the name given to intrusive rock in which quartz and feldspar are the dominant minerals. Aplites are usually very fine-grained, white, grey or pinkish, and their constituents are visible only with the help of a magnifying lens...
dikes are fine grained or sugary textured intrusives of granitic composition. 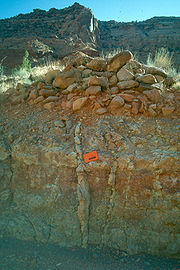 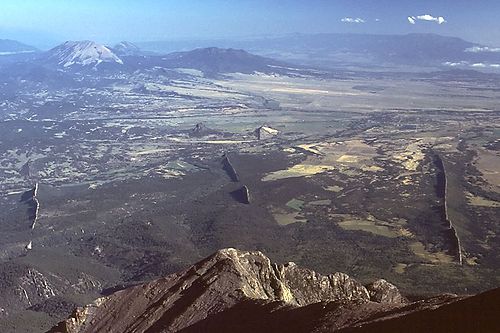