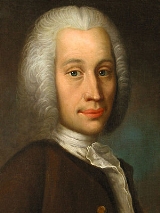 Overview
Anders Celsius was a Swedish
Sweden
Sweden , officially the Kingdom of Sweden , is a Nordic country on the Scandinavian Peninsula in Northern Europe. Sweden borders with Norway and Finland and is connected to Denmark by a bridge-tunnel across the Öresund....
astronomer
Astronomy
Astronomy is a natural science that deals with the study of celestial objects and phenomena that originate outside the atmosphere of Earth...
. He was professor of astronomy at Uppsala University
Uppsala University
Uppsala University is a research university in Uppsala, Sweden, and is the oldest university in Scandinavia, founded in 1477. It consistently ranks among the best universities in Northern Europe in international rankings and is generally considered one of the most prestigious institutions of...
from 1730 to 1744, but traveled from 1732 to 1735 visiting notable observatories in Germany, Italy and France. He founded the Uppsala Astronomical Observatory
Uppsala Astronomical Observatory
The Uppsala Astronomical Observatory is the oldest astronomical observatory in Sweden. It was founded in 1741, though there was a professorial chair of astronomy at the University of Uppsala from 1593 and the university archives include lecture notes in astronomy from the 1480s.In the 18th...
in 1741, and in 1742 he proposed the Celsius
Celsius
Celsius is a scale and unit of measurement for temperature. It is named after the Swedish astronomer Anders Celsius , who developed a similar temperature scale two years before his death...
temperature
Temperature
Temperature is a physical property of matter that quantitatively expresses the common notions of hot and cold. Objects of low temperature are cold, while various degrees of higher temperatures are referred to as warm or hot...
scale which takes his name. The scale was later reversed in 1745 by Carl Linnaeus, one year after Celsius' death.
Anders Celsius was born in Uppsala
Uppsala
- Economy :Today Uppsala is well established in medical research and recognized for its leading position in biotechnology.*Abbott Medical Optics *GE Healthcare*Pfizer *Phadia, an offshoot of Pharmacia*Fresenius*Q-Med...
, Sweden on 27 November 1701.