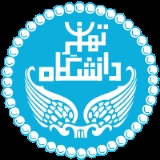 The University of Tehran , also known as Tehran University and UT, is Iran
Iran
Iran , officially the Islamic Republic of Iran , is a country in Southern and Western Asia. The name "Iran" has been in use natively since the Sassanian era and came into use internationally in 1935, before which the country was known to the Western world as Persia...
's oldest university. Located in Tehran
Tehran
Tehran , sometimes spelled Teheran, is the capital of Iran and Tehran Province. With an estimated population of 8,429,807; it is also Iran's largest urban area and city, one of the largest cities in Western Asia, and is the world's 19th largest city.In the 20th century, Tehran was subject to...
, the university is among the most prestigious in the country, and is consistently selected as the first choice of many applicants in the annual nationwide entrance exam for top Iranian universities. Based on its historical, socio-cultural and political pedigree, as well as its research and teaching profile, UT has been nicknamed "The mother university of Iran" . The university offers 111 bachelor degree programs, 177 masters' degree programs, and 156 Ph.D. programs. The school's renowned undergraduate and graduate engineering programs require that prospective applicants take a comprehensive entrance exam. Only candidates scoring in the top one percent or better are offered admission.

In 1928, Professor Mahmoud Hessaby
Mahmoud Hessaby
Sayyed Mahmoud Hessaby was a prominent Iranian scientist, researcher and distinguished professor of University of Tehran...
proposed to the Minister of Education, the Late Ali Asghar Hekmat, that Iran establish a comprehensive institute that would cover most of the sciences.

Hekmat, in collaboration with the French-born architect Andre Godard
André Godard
André Godard was a French born archeologist, architect and art historian.Godard was born in Chaumont. A graduate of the École des Beaux-Arts of Paris, he designed the National Museum of Iran and was appointed its first director in 1936. He was also instrumental in the design of Tehran University...
and his team of European architects, ultimately designed what would become the master plan of the university's main campus.

In 1934, the formerly males-only university opened its doors to women as part of the country's sweeping universal education policy. The school was officially inaugurated that same year.

At present, UT comprises 40 faculties, institutes, as well as centers of research and education. The university consists of seven campuses:

University of Tehran is appointed as a Center of Excellence (fa:قطب علمی) by Iran's Ministry of Science and Technology in the fields of "Evaluation and improvement of irrigation networks", "Breeding and Biotechnology of trees", "Farming, Grading and Biotechnology", "Applied Electromagnetic Systems", "Land Logistics", "Sustainable Urban Planning and Development", "Architectural Technology", "Biological Control of Pests and Plant Diseases", "Rural Studies and Planning", "High-Performance Materials", "Control and Intelligent Processing", "Sustainable Management of Watershed", "Applied Management of Fast Growing Wood Species", "Surveying and Disaster Management", "Engineering and Infrastructure Management", "Oil and Gas".This appointment is based on national standing based on research achievements and invested funding in the mentioned topics.Fifteen percent of the country’s Centers of Excellence, as recognized by the government, are located at the University of Tehran, which along with more than 40 research centers ensure UT’s commitment to research. Together, over 3,500 laboratories are active in these centers and in the faculties. In addition, the University of Tehran publishes more than 50 scientific journals, some of which have the ISI index.

The Central Library and Documentation Center of the University of Tehran has been a member of the International Federation of Library Associations and institutions (IFLA) since 1967. The Central Library is the largest academic library in Iran. The library compliments the 35 specialized libraries based at different faculties, all with the aim of advancing the research goals of the University. Currently the Central Library and Documentation Center is offering its services to more than 65 thousand members. It hosts more than 5,000 users daily. The library offers its resources under 13 main collections (most of which have been donated by distinguished professors of the University). The manuscript collection of the University of Tehran includes over 17,000 volumes of manuscripts in Persian, Arabic and Turkish. The library also hosts a state of the art center for the preservation of manuscripts.
The University of Tehran Press (UTP), which focuses on publishing academic books, has published over 5,000 books up until today, and currently publishes on average more than one book per day. UTP has over 96 distribution agents throughout the country as well as one in Afghanistan.

The emblem
Emblem
An emblem is a pictorial image, abstract or representational, that epitomizes a concept — e.g., a moral truth, or an allegory — or that represents a person, such as a king or saint.-Distinction: emblem and symbol:...
of the University of Tehran, which was designed by Dr. Mohsen Moghadam, a late faculty member of the Faculty of Fine Arts, is based on an image, which can be found in the stucco
Stucco
Stucco or render is a material made of an aggregate, a binder, and water. Stucco is applied wet and hardens to a very dense solid. It is used as decorative coating for walls and ceilings and as a sculptural and artistic material in architecture...
relief and seals of the Sasanid period. In this case, it is a copy from a stucco relief discovered in the city of Ctesiphon
Ctesiphon
Ctesiphon, the imperial capital of the Parthian Arsacids and of the Persian Sassanids, was one of the great cities of ancient Mesopotamia.The ruins of the city are located on the east bank of the Tigris, across the river from the Hellenistic city of Seleucia...
.

The seal symbolized ownership. In the Sassanid period, these seals were used in stucco reliefs, coins, and silver utensils as a family symbol. Since the alphabet of Sasanid Pahlavi’s script was used in these badges, they have the nature of a monogram as well.

The motif is placed between two eagle wings. One can also find these motifs in other images of this period, such as in royal crowns, particularly at the end of the Sasanid period. Crowns with these seals have been called “two-feather crowns” in The Shahnameh. The motif between the wings was made by combining Pahlavi scripts. Some scholars have tried to read these images. The script is in the form of “Afzoot” (Amrood), which means plentiful and increasing. 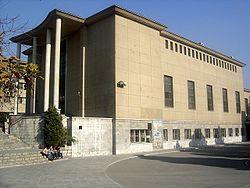 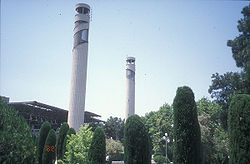 University of Tehran's central place in Iranian elite circles has made it the setting for many political events and cultural works.

Perhaps, to historians, the University of Tehran is most notably remembered for its key roles in the political events of recent history. It was in front of the same gates of this school that The Shah's
Mohammad Reza Pahlavi
Mohammad Rezā Shāh Pahlavi, Shah of Iran, Shah of Persia , ruled Iran from 16 September 1941 until his overthrow by the Iranian Revolution on 11 February 1979...
army opened fire on dissident students, killing many and further triggering the 1979 revolution
Iranian Revolution
The Iranian Revolution refers to events involving the overthrow of Iran's monarchy under Shah Mohammad Reza Pahlavi and its replacement with an Islamic republic under Ayatollah Ruhollah Khomeini, the leader of the...
of Iran.
It was there and 20 years later in July 1999 that, albeit, a much smaller number of dissident students confronted the police.

University of Tehran (UT) has always been a bastion of political movement and ideology. At UT the leaders of the country deliver some of their most potent speeches often on Friday during prayers. Since the 1979 Islamic Revolution, the main campus of the university and its surrounding streets have been the site for Tehran's Friday prayers.

The political and social role of University of Tehran in the Iranian domestic arena has continued to be so pronounced that in November 2005 (to February 2008) a senior Islamic scholar became chancellor of the university, replacing Dr. Faraji-dana (professor of electrical engineering faculty). Ayatollah Abbasali Amid Zanjani
Abbasali Amid Zanjani
Ayatollah Abbasali Amid Zanjani was an Iranian politician and cleric. He was the only cleric president of University of Tehran, served from 2005 to 2008. -Early life:...
(عباسعلی عميد زنجانی) is a professor in Law, is known for his strong ties to Ayatollah Khomeini in the 1979 revolution, and had spent time in the Shah's prisons before the Islamic Revolution. In February 2008, an Iranian economist, Dr. Farhad Rahbar, a former vice president of Iran and head of Management and Planning Organization of Iran, became the new (31st) chancellor of the university.

One hundred and nineteen faculty members of the University of Tehran are said to have resigned on June 15, 2009 to protest the attack on university dorms in the wake of contested 2009 presidential elections
Iranian presidential election, 2009
Iran's tenth presidential election was held on 12 June 2009, with incumbent Mahmoud Ahmadinejad running against three challengers. The next morning the Islamic Republic News Agency, Iran's official news agency, announced that with two-thirds of the votes counted, Ahmadinejad had won the election...
: although clear follow-up data is hard to establish, it seems that most or all resignations were not accepted.