The Sumerian king list
Sumerian king list
The Sumerian King List is an ancient manuscript originally recorded in the Sumerian language, listing kings of Sumer from Sumerian and neighboring dynasties, their supposed reign lengths, and the locations of "official" kingship...
states that it was the first city to have kings following the deluge, beginning with Jushur.

What is a modern city of Sumerians kish??
More

Kish was occupied beginning in the Jemdet Nasr period
Jemdet Nasr period
The Jemdet Nasr period is an archaeological culture in southern Mesopotamia that is generally dated to 3100–2900 BCE. It is named after the type-site Jemdet Nasr, where the assemblage typical for this period was first recognized. Its geographical distribution is limited to south–central Iraq...
(ca. 3100 BC), gaining prominence as one of the pre-eminent powers in the region during the early dynastic period.

The Sumerian king list
Sumerian king list
The Sumerian King List is an ancient manuscript originally recorded in the Sumerian language, listing kings of Sumer from Sumerian and neighboring dynasties, their supposed reign lengths, and the locations of "official" kingship...
states that it was the first city to have kings following the deluge, beginning with Jushur. Jushur's successor is called Kullassina-bel
Kullassina-bel
Kullassina-bel of Kish was the second king in the First Dynasty of Kish according to the Sumerian king list, which adds that he reigned for 960 years ....
, but this is actually a sentence in Akkadian meaning "All of them were lord". Thus, some scholars have suggested that this may have been intended to signify the absence of a central authority in Kish for a time. The names of the next nine kings of Kish preceding Etana
Etana
Etana was an ancient, legendary Sumerian king of the city of Kish, and was, according to the Sumerian king list, one of the kings who reigned after the deluge. He is listed as the successor of Arwium, the son of Mashda, as king of Kish...
are all Akkadian words for animals, e.g. Zuqaqip
Zuqaqip
Zuqaqip of Kish was the ninth Sumerian king of the First Dynasty of Kish , according to the Sumerian King List, where his length of reign is given as 900 years. His name means "Scorpion".-See also:*Scorpion I...
"scorpion". The Semitic
Semitic
In linguistics and ethnology, Semitic was first used to refer to a language family of largely Middle Eastern origin, now called the Semitic languages...
nature of these and other early names associated with Kish reveals that its population had a strong Semitic component from the dawn of recorded history.

The 12th king of Kish appearing on the list, Etana
Etana
Etana was an ancient, legendary Sumerian king of the city of Kish, and was, according to the Sumerian king list, one of the kings who reigned after the deluge. He is listed as the successor of Arwium, the son of Mashda, as king of Kish...
, is noted as "the shepherd, who ascended to heaven and consolidated all the foreign countries". Although his reign has yet to be archaeologically attested, his name is found in later legendary tablets, and Etana is sometimes regarded as the first king and founder of Kish himself. The 21st king of Kish on the list, Enmebaragesi
Enmebaragesi
Enmebaragesi was a king of Kish, according to the Sumerian king list. The list states that he subdued Elam, reigned 900 years, and was captured single-handedly by Dumuzid "the fisherman" of Kuara, predecessor of Gilgamesh.He is the earliest ruler on the king list whose name is attested directly...
, said to have captured the weapons of Elam
Elam
Elam was an ancient civilization located in what is now southwest Iran. Elam was centered in the far west and the southwest of modern-day Iran, stretching from the lowlands of Khuzestan and Ilam Province, as well as a small part of southern Iraq...
, is the first name confirmed by archaeological finds from his reign. He is also known through other literary references, where he and his son Aga of Kish
Aga of Kish
Aga is listed on the Sumerian King List as the last king in the first Dynasty of Kish.Aga is mentioned in the Epic of Gilgamesh as having besieged Uruk...
are portrayed as contemporary rivals of Dumuzid, the Fisherman
Dumuzid, the Fisherman
Dumuzid "the Fisherman", originally from Kuara in Sumer, was the 3rd king in the 1st Dynasty of Uruk, and Gilgamesh's predecessor, according to the Sumerian king list...
and Gilgamesh
Gilgamesh
Gilgamesh was the fifth king of Uruk, modern day Iraq , placing his reign ca. 2500 BC. According to the Sumerian king list he reigned for 126 years. In the Tummal Inscription, Gilgamesh, and his son Urlugal, rebuilt the sanctuary of the goddess Ninlil, in Tummal, a sacred quarter in her city of...
, early rulers of Uruk
Uruk
Uruk was an ancient city of Sumer and later Babylonia, situated east of the present bed of the Euphrates river, on the ancient dry former channel of the Euphrates River, some 30 km east of modern As-Samawah, Al-Muthannā, Iraq.Uruk gave its name to the Uruk...
.

Some early kings of Kish are known through archaeology, but are not named on the King list. These include Utug or Uhub, said to have defeated Hamazi
Hamazi
Hamazi or Khamazi was an ancient kingdom or city-state of some importance that reached its peak ca. 2500-2400 BC...
in the earliest days, and Mesilim
Mesilim
Mesilim or Mesalim was lugal of the Sumerian city-state of Kish.Though his name is missing from the Sumerian king list, Mesilim is among the earliest historical figures recorded in archaeological documents. He was a monarch in the 3rd Dynasty of Kish, reigning some time in the "Early Dynastic...
, who built temples in Adab and Lagash
Lagash
Lagash is located northwest of the junction of the Euphrates and Tigris rivers and east of Uruk, about east of the modern town of Ash Shatrah. Lagash was one of the oldest cities of the Ancient Near East...
, where he seems to have exercised some control.

The Third Dynasty of Kish is unique in that it begins with a woman, previously a tavern keeper, Kubau
Kubau
Kubau is a Local Government Area in Kaduna State, Nigeria. Its headquarters are in the town of Anchau.It has an area of 2,505 km² and a population of 282,045 at the 2006 census.The postal code of the area is 811....
, as "king". She was later deified as the goddess Kheba
Hebat
Hebat, also transcribed Kheba or Khepat, was the mother goddess of the Hurrians, known as "the mother of all living".- Family :Hebat is the consort of Teshub and the mother of Sarruma. Originally, as Kheba or "Kubau" it is thought she may have had a Southern Mesopotamian origin, being the divinised...
.

Afterwards, though its military and economic power was diminished, it retained a strong political and symbolic significance. Just as with Nippur
Nippur
Nippur was one of the most ancient of all the Sumerian cities. It was the special seat of the worship of the Sumerian god Enlil, the "Lord Wind," ruler of the cosmos subject to An alone...
to the south, control of Kish was a prime element in legitimizing dominance over the north. Because of the city's symbolic value, strong rulers later added the traditional title "King of Kish", even if they were from Akkad
Akkad
The Akkadian Empire was an empire centered in the city of Akkad and its surrounding region in Mesopotamia....
, Ur
Ur
Ur was an important city-state in ancient Sumer located at the site of modern Tell el-Muqayyar in Iraq's Dhi Qar Governorate...
, or Babylon
Babylon
Babylon was an Akkadian city-state of ancient Mesopotamia, the remains of which are found in present-day Al Hillah, Babil Province, Iraq, about 85 kilometers south of Baghdad...
. One of the earliest to adopt this title upon subjecting Kish to his empire was King Mesannepada
Mesannepada
Mesannepada was the first king listed for the first dynasty of Ur on the Sumerian king list...
of Ur. A few governors of Kish for other powers in later times are also known.

Sargon of Akkad
Sargon of Akkad
Sargon of Akkad, also known as Sargon the Great "the Great King" , was an Akkadian emperor famous for his conquest of the Sumerian city-states in the 23rd and 22nd centuries BC. The founder of the Dynasty of Akkad, Sargon reigned in the last quarter of the third millennium BC...
came from the area of Kish. The city's patron deity was Zababa
Zababa
Zababa was the Hittite way of writing the name of a war god, using Akkadian writing conventions. Most likely, this spelling represents the native Anatolian Hattian god [Wurunkatte]. His Hurrian name was Astabis. He is connected with the Akkadian god Ninurta...
(or Zamama) in Akkadian times, along with his wife, the goddess Inanna
Inanna
Inanna, also spelled Inana is the Sumerian goddess of sexual love, fertility, and warfare....
.

Kish continued to be occupied through the old Babylonian, Kassite
Kassite
Kassite is a rare mineral with formula CaTi2O42. It crystallizes in the orthorhombic crystal system and forms radiating rosettes and pseudo-hexagonal tabular crystals which are commonly twinned. Crystals are brownish pink to pale yellow and are translucent with an adamantine luster...
, and Neo-Assyrian periods, and into classical times, before being abandoned. 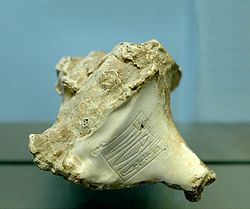 The Kish archaeological site is actually an oval area roughly 5 miles by 2 miles, transected by the dry former bed of the Euphrates River, encompassing around 40 mounds, the largest being Uhaimir and Ingharra. The most notable mounds are:-


After illegally excavated tablets began appearing at the beginning
of the last century, François Thureau-Dangin identified the site as being Kish. Those tablets ended up in a variety of museums.

A French archaeological team under Henri de Genouillac excavated at Kish between 1912 and 1914, finding 1400 Old Babylonian tablets which were distributed to the Istanbul Archaeology Museum
Istanbul Archaeology Museum
The Istanbul Archaeology Museums is a group of three archeological museums located in the Eminönü district of Istanbul, Turkey, near Gülhane Park and Topkapı Palace.The Istanbul Archaeology Museums consists of three museums....
and the Louvre
Louvre
The Musée du Louvre – in English, the Louvre Museum or simply the Louvre – is one of the world's largest museums, the most visited art museum in the world and a historic monument. A central landmark of Paris, it is located on the Right Bank of the Seine in the 1st arrondissement...
.
Later a joint Field Museum and Oxford University team under Stephen Langdon
Stephen Herbert Langdon
Stephen Herbert Langdon was an American-born British Assyriologist. Born to George Knowles and Abigail Hassinger Langdon in Monroe, Michigan, Langdon studied at the University of Michigan, participating in Phi Beta Kappa and earning an A. B. in 1898 and an A. M. in 1899...
excavated from 1923 to 1933, with the recovered materials split between Chicago and the Ashmolean Museum
Ashmolean Museum
The Ashmolean Museum on Beaumont Street, Oxford, England, is the world's first university museum...
at Oxford.
The actual excavations at Kish were led initially by E. MacKay and later by L. C. Watelin. Work on the faunal and flora remains was conducted by Henry Field.
More recently, a Japanese team from the Kokushikan University
Kokushikan University
is a private university in Setagaya, Tokyo, Japan.Combined teams of the Graduate School of Engineering and the Department of Science and Engineering competed against 130 team and came in 11th place in the 27th Formula SAE in 2007...
led by Ken Matsumoto excavated at Kish in 1988, 2000, and 2001. The final season lasted only one week.