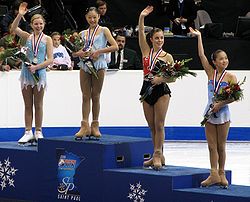 The 2011 Championships were held from January 22 through January 30, 2011 in Greensboro, North Carolina
Greensboro, North Carolina
Greensboro is a city in the U.S. state of North Carolina. It is the third-largest city by population in North Carolina and the largest city in Guilford County and the surrounding Piedmont Triad metropolitan region. According to the 2010 U.S...
. The 2012 Championships will be held January 22 through 29, 2012 in San Jose, California
San Jose, California
San Jose is the third-largest city in California, the tenth-largest in the U.S., and the county seat of Santa Clara County which is located at the southern end of San Francisco Bay...
.

Skaters can also receive bye
Bye (sports)
A bye, in sports and other competitive activities, most commonly refers to the practice of allowing a player or team to advance to the next round of a playoff tournament without playing...
s to the competition. Skaters can earn the right at the U.S. Championships without qualifying through a sectional championship by

Note that the qualifying rules for the U.S. Championships have varied greatly over the history of the event. The regional qualifying event structure was not uniformly put in place until the 1966-67 season. Also, prior to this time, at sectional qualifying events skaters competed at one level above their national level, so (for instance) senior sectional champions qualified to skate at the junior, rather than senior, national level. Qualification for the senior national championship was through a separate set of rules, essentially based on results from the previous season. There have also been changes at various times to the number of skaters qualifying through sectionals, and to policies for byes.

In June 1994, U.S. Figure Skating voted to strip Tonya Harding
Tonya Harding
Tonya Maxine Harding is an American figure skating champion. In 1991 she won the U.S. Figure Skating Championships and placed second in the World Championships. She was the second woman, and the first American woman, to complete a triple axel jump in competition...
of her 1994 title. However, the competition results were not changed and the title was left vacant rather than moving all the other competitors up one position.