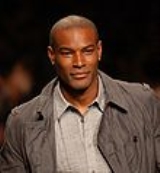 Encyclopedia
Tyson Craig Beckford is an American
United States
The United States of America is a federal constitutional republic comprising fifty states and a federal district...
male model and actor
Actor
An actor is a person who acts in a dramatic production and who works in film, television, theatre, or radio in that capacity...
, best known as a Ralph Lauren
Ralph Lauren
Ralph Lauren is an American fashion designer and business executive; best known for his Polo Ralph Lauren clothing brand.-Early life:...
model. He was also the host of both seasons of the Bravo program Make Me a Supermodel
Make Me a Supermodel (U.S. TV series)
Make Me a Supermodel was an American reality television modeling competition series based on the British reality series of the same name. Following an audition preview on January 2, 2008, the series premiered January 10 on the cable television network Bravo...
.

Beckford was born on December 19, 1970 to a Jamaican father of Panama
Panama
Panama , officially the Republic of Panama , is the southernmost country of Central America. Situated on the isthmus connecting North and South America, it is bordered by Costa Rica to the northwest, Colombia to the southeast, the Caribbean Sea to the north and the Pacific Ocean to the south. The...
nian descent and a Chinese Jamaican
Chinese Jamaican
Chinese Jamaicans are the descendants of migrants from China to Jamaica. Early migrants came in the 19th century; there was another wave of migration in the 1980s and 1990s...
mother. He grew up in Rochester, New York
Rochester, New York
Rochester is a city in Monroe County, New York, south of Lake Ontario in the United States. Known as The World's Image Centre, it was also once known as The Flour City, and more recently as The Flower City...
and attended Bay Trail Middle School in nearby Penfield, New York
Penfield, New York
Penfield is a town in Monroe County, New York, United States. The population was 36,242 at the 2010 census.The town was incorporated in 1810 by the proprietor, Daniel Penfield, who purchased the town lands in 1795 and moved to the area in 1809. Penfield is a suburb of Rochester, New York...
. He then graduated from Pittsford Mendon High School
Pittsford Mendon High School
Pittsford Mendon High School is a public high school in suburban Rochester, Monroe County, upstate New York. It is one of two high schools in the Pittsford Central School District, the other being Pittsford Sutherland High School...
in the affluent suburb of Pittsford
Pittsford (town), New York
Pittsford is a town in Monroe County, New York, United States and is an affluent suburb of Rochester. The population was 29,405 at the 2010 census....
as a participant in the Urban-Suburban Program, a busing program designed to give educational opportunities to urban youth in the city's surrounding suburban school districts. Beckford was a member of his high school football and track teams. He is also the cousin of Los Angeles Lakers
Los Angeles Lakers
The Los Angeles Lakers are an American professional basketball team based in Los Angeles, California. They play in the Pacific Division of the Western Conference in the National Basketball Association...
' forward Ron Artest
Ron Artest
Metta World Peace is an American professional basketball player and rapper who is currently with the Los Angeles Lakers in the NBA. World Peace gained a reputation as one of the league's premier defenders as he won the NBA Defensive Player of the Year Award in 2004...
.

In 1992, he was recruited to hip hop magazine The Source
The Source (magazine)
The Source is a United States-based, monthly full-color magazine covering hip-hop music, politics, and culture, founded in 1988. It is the world's second longest running rap periodical, behind United Kingdom-based publication Hip Hop Connection. The Source was founded as a newsletter in 1988...
by a talent scout, Jeff Jones, who has been credited with 'discovering' Beckford in New York
New York
New York is a state in the Northeastern region of the United States. It is the nation's third most populous state. New York is bordered by New Jersey and Pennsylvania to the south, and by Connecticut, Massachusetts and Vermont to the east...
City. In 1993, Beckford was recruited by Ralph Lauren as the front model for the company's Polo line of male sportswear.

Beckford was named "Man of the Year" in 1995 by the cable television
Cable television
Cable television is a system of providing television programs to consumers via radio frequency signals transmitted to televisions through coaxial cables or digital light pulses through fixed optical fibers located on the subscriber's property, much like the over-the-air method used in traditional...
music channel VH1
VH1
VH1 or Vh1 is an American cable television network based in New York City. Launched on January 1, 1985 in the old space of Turner Broadcasting's short-lived Cable Music Channel, the original purpose of the channel was to build on the success of MTV by playing music videos, but targeting a slightly...
& one of the "50 Most Beautiful People in the World" by People
People (magazine)
In 1998, the magazine introduced a version targeted at teens called Teen People. However, on July 27, 2006, the company announced it would shut down publication of Teen People immediately. The last issue to be released was scheduled for September 2006. Subscribers to this magazine received...
magazine. He is represented by Nous Model Management
Nous Model Management
Nous Model Management is a modeling agency in Los Angeles founded by Kenya Knight in February 1998 and specializing in both new male and female high fashion print and runway models as well as representing many notable established models in the industry for their West Coast activities, the most...
in Los Angeles, California, and Independent Models in London
London
London is the capital city of :England and the :United Kingdom, the largest metropolitan area in the United Kingdom, and the largest urban zone in the European Union by most measures. Located on the River Thames, London has been a major settlement for two millennia, its history going back to its...
, England. He was ranked at #38 on VH1's 40 Hottest Hotties of the '90s.

In 2003, he appeared on the ABC network's celebrity reality game show I'm a Celebrity... Get Me Out of Here!. In September 2008, he supported the National RESPECT! Campaign against domestic violence, recording a voice message for the Giverespect.org Web site, speaking about the importance of respect for others.

Beckford is currently co-hosting the modeling contest Make Me a Supermodel on the television channel Bravo with fellow supermodel Niki Taylor
Niki Taylor
Nicole Renee "Niki" Taylor is an American model.-Early life:Taylor was born in Fort Lauderdale, Florida, to Ken and Barbara Taylor, a highway patrol lieutenant and a photographer, respectively. She was raised in Pembroke Pines, Florida, and attended Cooper City High School...
. The show has chosen Nicole Trunfio
Nicole Trunfio
Nicole Trunfio is an Australian model from Merredin, a small country town in Western Australia.-Personal life:Trunfio is the youngest girl in a family of four children. She attended St. Mary's Primary School in Merredin...
to join Beckford as a mentor to the model contestants for the show's upcoming second season. New judges include designer Catherine Malandrino
Catherine Malandrino
Catherine Malandrino is a fashion designer. She was born in Grenoble, France and now works in New York City as well as in Paris.-Profile:...
, model Jenny Shimizu
Jenny Shimizu
Jenny Lynn Shimizu is an American model and actress. She was born in San Jose, California.- Career :While working as a mechanic she was approached to model for the Calvin Klein CK1 fragrance ads and model Calvin Klein fashions...
, photographer Perou
Perou
thumb|perou by frances|rightRalph John Perou , known professionally as Perou, is a British fashion, portrait and music photographer who has also appeared as a judge on Make Me a Supermodel UK and on season 2 of Bravo TV's American Make Me a Supermodel...
and model scout Marlon.

On June 7, 2005, Beckford was injured following a car accident in Secaucus, New Jersey
Secaucus, New Jersey
Secaucus is a town in Hudson County, New Jersey. As of the 2010 United States Census, the town population was 16,264. Located within the New Jersey Meadowlands, it is the most suburban of the county's municipalities, though large parts of the town are dedicated to light manufacturing, retail, and...
. Shortly before 5:00am, he lost control of his 2004 Dodge Ram SRT-10 and struck a utility pole. The vehicle caught fire immediately after the collision, but Beckford was able to pull himself out before the red pick-up became fully engulfed in flames. He was taken to the Jersey City Medical Center
Jersey City Medical Center
The Jersey City Medical Center is a hospital in Jersey City, New Jersey. The hospital has had different facilities in the city.-History:The hospital began as the "Charity Hospital" but the Board of Aldermen of Jersey City bought land at Baldwin Avenue and Montgomery Street in 1882 for a new hospital...
and hospitalized for head trauma and cuts. During an interview on The Oprah Winfrey Show
The Oprah Winfrey Show
The Oprah Winfrey Show is an American syndicated talk show hosted and produced by its namesake Oprah Winfrey. It ran nationally for 25 seasons beginning in 1986, before concluding in 2011. It is the highest-rated talk show in American television history....
, Tyson claimed the accident had a profound effect on his spirituality.

Beckford has been a resident of the New Jersey
New Jersey
New Jersey is a state in the Northeastern and Middle Atlantic regions of the United States. , its population was 8,791,894. It is bordered on the north and east by the state of New York, on the southeast and south by the Atlantic Ocean, on the west by Pennsylvania and on the southwest by Delaware...
communities of Edgewater
Edgewater, New Jersey
Edgewater is a borough located along the Hudson River in Bergen County, New Jersey. As of the 2010 census, the borough had a population of 11,513...
and West New York
West New York, New Jersey
West New York is a town in Hudson County, New Jersey, United States, situated upon the New Jersey Palisades. As of the 2010 United States Census, the town population was 49,708.-Geography:...
.

Beckford has a 13-year-old son,Jordan Beckford (Born in 98) , from a previous relationship with celebrity stylist April Roomet, who appears on the E! television program, "Candy Girls".