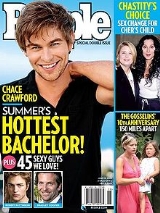 Overview
In 1998, the magazine introduced a version targeted at teens called Teen People. However, on July 27, 2006, the company announced it would shut down publication of Teen People immediately. The last issue to be released was scheduled for September 2006. Subscribers to this magazine received Entertainment Weekly for the rest of their issues in exchange. There were numerous reasons cited for the publication shutdown, including a downfall in ad pages, competition from both other teen-oriented magazines and the internet along with a decrease in circulation numbers.

Encyclopedia
In 1998, the magazine introduced a version targeted at teens called Teen People. However, on July 27, 2006, the company announced it would shut down publication of Teen People immediately. The last issue to be released was scheduled for September 2006. Subscribers to this magazine received Entertainment Weekly for the rest of their issues in exchange. There were numerous reasons cited for the publication shutdown, including a downfall in ad pages, competition from both other teen-oriented magazines and the internet along with a decrease in circulation numbers. Teenpeople.com was merged into People.com in April 2007. People.com will "carry teen-focused stories that are branded as TeenPeople.com", Mark Golin the editor of People.com explained, with the decision to merge the brands, "We've got traffic on TeenPeople, People is a larger site, why not combine and have the teen traffic going to one place?"

In a July 2006 Variety
Variety (magazine)
Variety is an American weekly entertainment-trade magazine founded in New York City, New York, in 1905 by Sime Silverman. With the rise of the importance of the motion-picture industry, Daily Variety, a daily edition based in Los Angeles, California, was founded by Silverman in 1933. In 1998, the...
article, Janice Min, Us Weekly
Us Weekly
Us Weekly is a celebrity gossip magazine, founded in 1977 by The New York Times Company, who sold it in 1980. It was acquired by Wenner Media in 1986. The publication covers topics ranging from celebrity relationships to the latest trends in fashion, beauty, and entertainment...
editor-in-chief, blamed People for the increase in cost to publishers of celebrity photos:

"They are among the largest spenders of celebrity photos in the industry....One of the first things they ever did, that led to the jacking up of photo prices, was to pay $75,000 to buy pictures of Jennifer Lopez
Jennifer Lopez
Jennifer Lynn Lopez is an American actress, singer, record producer, dancer, television personality, and fashion designer. Lopez began her career as a dancer on the television comedy program In Living Color. Subsequently venturing into acting, she gained recognition in the 1995 action-thriller...
reading Us magazine, so Us Weekly couldn't buy them.
"That was the watershed moment that kicked off high photo prices in my mind. I had never seen anything like it. But they saw a competitor come along, and responded. It was a business move, and probably a smart one." People reportedly paid $4.1 million for newborn photos of Shiloh Nouvel Jolie-Pitt, the child of Angelina Jolie
Angelina Jolie
Angelina Jolie is an American actress. She has received an Academy Award, two Screen Actors Guild Awards, and three Golden Globe Awards, and was named Hollywood's highest-paid actress by Forbes in 2009 and 2011. Jolie is noted for promoting humanitarian causes as a Goodwill Ambassador for the...
and Brad Pitt
Brad Pitt
William Bradley "Brad" Pitt is an American actor and film producer. Pitt has received two Academy Award nominations and four Golden Globe Award nominations, winning one...
. The photos set a single-day traffic record for their website, attracting 26.5 million page views.

The annual feature the "Sexiest Man Alive" is billed as a benchmark of male attractiveness
Attractiveness
Attractiveness or attraction refers to a quality that causes an interest or desire in something or someone. The term attraction may also refer to the object of the attraction itself, as in tourist attraction.-Visual attractiveness:...
and typically includes only famous people
Bankable star
A bankable star is an actor famous or charismatic enough to be "capable of guaranteeing box-office success simply by showing up in a movie". A bankable director is a similar notion.- Overview :...
and celebrities. It is determined in a similar procedure to Time's Person of the Year
Person of the Year
Person of the Year is an annual issue of the United States newsmagazine Time that features and profiles a person, couple, group, idea, place, or machine that "for better or for worse, ...has done the most to influence the events of the year."- History :The tradition of selecting a Man of the Year...
. The origin of the title was a discussion on a planned story on Mel Gibson
Mel Gibson
Mel Colm-Cille Gerard Gibson, AO is an American actor, film director, producer and screenwriter. Born in Peekskill, New York, Gibson moved with his parents to Sydney, Australia when he was 12 years old and later studied acting at the Australian National Institute of Dramatic Art.After appearing in...
. A female editor exclaimed, "Oh my God, he is the sexiest man alive!" And someone else said, "You should use that as a cover line."

For the first decade or so, the feature appeared at uneven intervals. Originally awarded in the wintertime, it shifted around the calendar, resulting in gaps as short as seven months and as long as a year and a half (with no selection at all during 1994). Since 1997, the dates have settled between mid-November and early December.

Dates of magazine issues, winners, ages of winners at the time of selection, and pertinent comments are listed below.

As of 2011, John F. Kennedy, Jr.
John F. Kennedy, Jr.
John Fitzgerald Kennedy, Jr. , often referred to as John F. Kennedy, Jr., JFK Jr., John Jr. or John-John, was an American socialite, magazine publisher, lawyer, and pilot. The elder son of U.S. President John F...
and Patrick Swayze
Patrick Swayze
Patrick Wayne Swayze was an American actor, dancer and singer-songwriter. He was best known for his tough-guy roles, as romantic leading men in the hit films Dirty Dancing and Ghost, and as Orry Main in the North and South television miniseries. He was named by People magazine as its "Sexiest...
are the only winners to have died since winning.

Most Intriguing People of the Year

At the end of each year People Magazine famously selects 25 news-making individuals or couples who have received a lot of media attention over the past 12 months and showcases them in a special year-end issue, the '25 Most Intriguing People of the Year'. This series of full page features and half page featurettes includes world leaders and political activists, famous actors and entertainers, elite athletes, prominent business people, accomplished scientists and occasionally members of the public whose stories have made an unusual impact in news or tabloid media.

For example, the news-makers People Magazine named as the 'Most Intriguing People of 2010' were:

People.com is the official online version of People Magazine. As of April 2011, People.com was ranked as the third most popular Entertainment News property in the United States by comScore
ComScore
comScore is a Internet marketing research company providing marketing data and services to many of the Internet's largest businesses. comScore tracks all internet data on its surveyed computers in order to study online behavior....
Media Metrix.