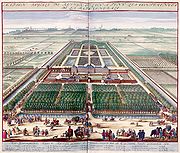 The Treaty of Ryswick or Ryswyck was signed on 20 September 1697 and named after Ryswick (now known as Rijswijk
Rijswijk
Rijswijk is a town and municipality in the western Netherlands, in the province of South Holland. It is a suburb of The Hague and covers an area of 14.48 km² ....
) in the Dutch Republic
Dutch Republic
The Dutch Republic — officially known as the Republic of the Seven United Netherlands , the Republic of the United Netherlands, or the Republic of the Seven United Provinces — was a republic in Europe existing from 1581 to 1795, preceding the Batavian Republic and ultimately...
. The treaty settled the Nine Years' War, which pitted France against the Grand Alliance of England, Spain, the Holy Roman Empire
Holy Roman Empire
The Holy Roman Empire was a realm that existed from 962 to 1806 in Central Europe.It was ruled by the Holy Roman Emperor. Its character changed during the Middle Ages and the Early Modern period, when the power of the emperor gradually weakened in favour of the princes...
and the United Provinces.

Negotiations started in May. The French representatives had their headquarters at The Hague
The Hague
The Hague is the capital city of the province of South Holland in the Netherlands. With a population of 500,000 inhabitants , it is the third largest city of the Netherlands, after Amsterdam and Rotterdam...
and the allies were based in Delft
Delft
Delft is a city and municipality in the province of South Holland , the Netherlands. It is located between Rotterdam and The Hague....
: the conference taking place in between the two towns in the Huis ter Nieuwburg
Huis ter Nieuwburg
Huis ter Nieuwburg or Huis ter Nieuburch was a palace in Rijswijk, Holland, Dutch Republic. The symmetrical French Classicist building was probably designed by the French architect Jacques de la Vallée and was built between 1633 and 1636 for stadtholder Prince Frederick Henry.The palace with...
in Ryswick.

For the first few weeks no result was reached, so in June the two protagonists in the struggle, William III of Orange
William III of England
William III & II was a sovereign Prince of Orange of the House of Orange-Nassau by birth. From 1672 he governed as Stadtholder William III of Orange over Holland, Zeeland, Utrecht, Guelders, and Overijssel of the Dutch Republic. From 1689 he reigned as William III over England and Ireland...
and Louis XIV of France
Louis XIV of France
Louis XIV , known as Louis the Great or the Sun King , was a Bourbon monarch who ruled as King of France and Navarre. His reign, from 1643 to his death in 1715, began at the age of four and lasted seventy-two years, three months, and eighteen days...
, each appointed one representative to meet together privately. The two chosen were William Bentinck, Earl of Portland, and Marshal Boufflers
Louis François, duc de Boufflers
Louis François, Duc de Boufflers, Comte de Cagny was a Marshal of France....
, and they soon drew up the terms of an agreement, to which, however, the Holy Roman Emperor Leopold I
Leopold I, Holy Roman Emperor
| style="float:right;" | Leopold I was a Holy Roman Emperor, King of Hungary and King of Bohemia. A member of the Habsburg family, he was the second son of Emperor Ferdinand III and his first wife, Maria Anna of Spain. His maternal grandparents were Philip III of Spain and Margaret of Austria...
and Charles II of Spain
Charles II of Spain
Charles II was the last Habsburg King of Spain and the ruler of large parts of Italy, the Spanish territories in the Southern Low Countries, and Spain's overseas Empire, stretching from the Americas to the Spanish East Indies...
would not assent. But in a short time Spain gave way, and on 20 September a treaty of peace was signed between France and the three powers, England, Spain and the United Provinces. William then persuaded Leopold to make peace, and a treaty between France and the Holy Roman Empire was signed on the following 30 October.

The basis of the peace was that all towns and districts seized since the Treaty of Nijmegen (1679) should be restored. Then France surrendered Freiburg, Breisach
Breisach
Breisach is a town with approximately 16,500 inhabitants, situated along the Rhine in the Rhine Valley, in the district Breisgau-Hochschwarzwald, Baden-Württemberg, Germany, about halfway between Freiburg and Colmar — 20 kilometres away from each — and about 60 kilometres north of Basel near the...
and Philippsburg
Philippsburg
Philippsburg is a town in Germany, in the district of Karlsruhe in Baden-Württemberg.-History:Before 1632, Philippsburg was known as "Udenheim".The city was a possession of the Bishop of Speyer from 1371–1718...
- to the Holy Roman Empire, although she kept Strasbourg
Strasbourg
Strasbourg is the capital and principal city of the Alsace region in eastern France and is the official seat of the European Parliament. Located close to the border with Germany, it is the capital of the Bas-Rhin département. The city and the region of Alsace are historically German-speaking,...
. On the other hand, she was granted Saint-Domingue
Saint-Domingue
The labour for these plantations was provided by an estimated 790,000 African slaves . Between 1764 and 1771, the average annual importation of slaves varied between 10,000-15,000; by 1786 it was about 28,000, and from 1787 onward, the colony received more than 40,000 slaves a year...
(later to become Haiti
Haiti
Haiti , officially the Republic of Haiti , is a Caribbean country. It occupies the western, smaller portion of the island of Hispaniola, in the Greater Antillean archipelago, which it shares with the Dominican Republic. Ayiti was the indigenous Taíno or Amerindian name for the island...
) and regained Pondicherry (after paying the Dutch a sum of 16,000 pagodas) and Nova Scotia
Nova Scotia
Nova Scotia is one of Canada's three Maritime provinces and is the most populous province in Atlantic Canada. The name of the province is Latin for "New Scotland," but "Nova Scotia" is the recognized, English-language name of the province. The provincial capital is Halifax. Nova Scotia is the...
, while Spain recovered Catalonia
Catalonia
Catalonia is an autonomous community in northeastern Spain, with the official status of a "nationality" of Spain. Catalonia comprises four provinces: Barcelona, Girona, Lleida, and Tarragona. Its capital and largest city is Barcelona. Catalonia covers an area of 32,114 km² and has an...
, and the barrier fortresses of Mons
Mons
Mons is a Walloon city and municipality located in the Belgian province of Hainaut, of which it is the capital. The Mons municipality includes the old communes of Cuesmes, Flénu, Ghlin, Hyon, Nimy, Obourg, Baudour , Jemappes, Ciply, Harmignies, Harveng, Havré, Maisières, Mesvin, Nouvelles,...
, Luxembourg
Luxembourg
Luxembourg , officially the Grand Duchy of Luxembourg , is a landlocked country in western Europe, bordered by Belgium, France, and Germany. It has two principal regions: the Oesling in the North as part of the Ardennes massif, and the Gutland in the south...
and Kortrijk
Kortrijk
Kortrijk ; , ; ) is a Belgian city and municipality located in the Flemish province West Flanders...
. The Duchy of Lorraine, which for many years had been in the possession of France, was restored to Leopold Joseph
Leopold, Duke of Lorraine
Leopold , surnamed the Good, was Duke of Lorraine and Bar from 1690 to his death.-Early life:Leopold Joseph Charles Dominique Agapet Hyacinthe was the son of Charles V, Duke of Lorraine, and his wife Eleonora Maria Josefa of Austria, a half-sister of Leopold I, Holy Roman Emperor.At the time of...
, a son of Charles IV, Duke of Lorraine
Charles IV, Duke of Lorraine
Charles IV was Duke of Lorraine from 1624 to 1634, when he abdicated under French pressure in favor of his younger brother, and again from 1661 until 1675.- Biography :...
, and the Dutch were to be allowed to garrison some of the chief fortresses in the Spanish Netherlands, including Namur
Namur (city)
Namur is a city and municipality in Wallonia, in southern Belgium. It is both the capital of the province of Namur and of Wallonia....
and Ypres
Ypres
Ypres is a Belgian municipality located in the Flemish province of West Flanders. The municipality comprises the city of Ypres and the villages of Boezinge, Brielen, Dikkebus, Elverdinge, Hollebeke, Sint-Jan, Vlamertinge, Voormezele, Zillebeke, and Zuidschote...
. Louis undertook to recognize William III
William III of England
William III & II was a sovereign Prince of Orange of the House of Orange-Nassau by birth. From 1672 he governed as Stadtholder William III of Orange over Holland, Zeeland, Utrecht, Guelders, and Overijssel of the Dutch Republic. From 1689 he reigned as William III over England and Ireland...
as king of England, and promised to give no further assistance to James II of England
James II of England
James II & VII was King of England and King of Ireland as James II and King of Scotland as James VII, from 6 February 1685. He was the last Catholic monarch to reign over the Kingdoms of England, Scotland, and Ireland...
; he abandoned his interference in the electorate of Cologne
Cologne
Cologne is Germany's fourth-largest city , and is the largest city both in the Germany Federal State of North Rhine-Westphalia and within the Rhine-Ruhr Metropolitan Area, one of the major European metropolitan areas with more than ten million inhabitants.Cologne is located on both sides of the...
and also the claim which he had put forward to some of the lands of the Electoral Palatinate.

The War of the Grand Alliance
War of the Grand Alliance
The Nine Years' War – often called the War of the Grand Alliance, the War of the Palatine Succession, or the War of the League of Augsburg – was a major war of the late 17th century fought between King Louis XIV of France, and a European-wide coalition, the Grand Alliance, led by the Anglo-Dutch...
also played out in North America, where it was called King William's War
King William's War
The first of the French and Indian Wars, King William's War was the name used in the English colonies in America to refer to the North American theater of the Nine Years' War...
. The French colonies of Acadia and New France (Canada), along with their Native allies (notably Abenaki, Pennacook, and Huron), fought with the Northern English colonies and their Native allies (notably Iroquois and Mohawk). The Treaty of Ryswick returned the territorial borders to where they had been before the war (status quo ante bellum). The Iroquois
Iroquois
The Iroquois , also known as the Haudenosaunee or the "People of the Longhouse", are an association of several tribes of indigenous people of North America...
nation, deserted by their English allies, continued to make war on the French colonies until 1701.
The source of this article is wikipedia, the free encyclopedia.  The text of this article is licensed under the GFDL.