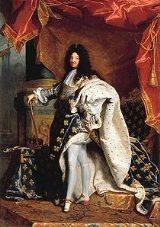 Overview
Louis XIV known as Louis the Great (French: "Louis le Grand") or the Sun King (French: le Roi-Soleil), was a Bourbon
House of Bourbon
The House of Bourbon is a European royal house, a branch of the Capetian dynasty . Bourbon kings first ruled Navarre and France in the 16th century. By the 18th century, members of the Bourbon dynasty also held thrones in Spain, Naples, Sicily, and Parma...
monarch who ruled as King of France and Navarre
Kingdom of Navarre
The Kingdom of Navarre , originally the Kingdom of Pamplona, was a European kingdom which occupied lands on either side of the Pyrenees alongside the Atlantic Ocean....
. His reign, from 1643 to his death in 1715, began at the age of four and lasted seventy-two years, three months, and eighteen days. As such, it is one of the longest documented reigns of any European monarch.

Louis began his personal rule of France in 1661 after the death of his chief minister, the Italian Cardinal Mazarin.

What reforms did Louis XIV institute?

What problems did Louis XIV face during his reign?

What is the acieved status of Louis XIV of France?

What is the ascribed status of Louis XIV of France?

Patron of the arts
More

1643    Four-year-old Louis XIV becomes King of France upon the death of his father, Louis XIII.

1660    James II of England is named Duke of Normandy by Louis XIV of France.

1661    Fall of Nicolas Fouquet: Louis XIV Superintendent of Finances is arrested in Nantes by D'Artagnan, captain of the king's musketeers.

1664    Louis XIV of France inaugurates the Palace of Versailles.

1670    In Dover, England, Charles II of Great Britain and Louis XIV of France sign the Secret Treaty of Dover.

1682    Louis XIV of France moves his court to Versailles.

1715    King Louis XIV of France dies after a reign of 72 years &mdash; the longest of any major European monarch.