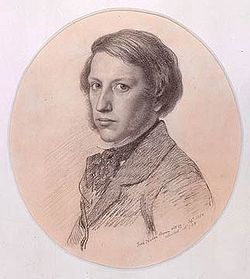 The Manchester Murals are a series of twelve paintings by Ford Madox Brown
Ford Madox Brown
Ford Madox Brown was an English painter of moral and historical subjects, notable for his distinctively graphic and often Hogarthian version of the Pre-Raphaelite style. Arguably, his most notable painting was Work...
on the history of Manchester
History of Manchester
The history of Manchester encompasses its change from a minor Lancastrian township into the pre-eminent industrial metropolis of the United Kingdom and the world. Manchester began expanding "at an astonishing rate" around the turn of the 19th century as part of a process of unplanned urbanisation...
, England
England
England is a country that is part of the United Kingdom. It shares land borders with Scotland to the north and Wales to the west; the Irish Sea is to the north west, the Celtic Sea to the south west, with the North Sea to the east and the English Channel to the south separating it from continental...
in Manchester Town Hall
Manchester Town Hall
Manchester Town Hall is a Victorian-era, Neo-gothic municipal building in Manchester, England. The building functions as the ceremonial headquarters of Manchester City Council and houses a number of local government departments....
. Following the success of Brown's painting Work
Work (painting)
Work is a painting by Ford Madox Brown, which is generally considered to be his most important achievement. It attempts to portray, both literally and analytically, the totality of the Victorian social system and the transition from a rural to an urban economy...
he was commissioned to paint six murals for the Great Hall of the new building. Another six murals were to be completed by a local artist, Frederic Shields
Frederic Shields
Frederic James Shields , was a British artist, illustrator and designer closely associated with the Pre-Raphaelites through Dante Gabriel Rossetti and Ford Madox Brown.-Early years:...
. Shields eventually withdrew, leaving Brown to complete all twelve works. The murals were begun in 1879, towards the end of Brown's career, but were not completed until 1893, the year he died. During this period he moved from London
London
London is the capital city of :England and the :United Kingdom, the largest metropolitan area in the United Kingdom, and the largest urban zone in the European Union by most measures. Located on the River Thames, London has been a major settlement for two millennia, its history going back to its...
to Manchester
Manchester
Manchester is a city and metropolitan borough in Greater Manchester, England. According to the Office for National Statistics, the 2010 mid-year population estimate for Manchester was 498,800. Manchester lies within one of the UK's largest metropolitan areas, the metropolitan county of Greater...
with his family, first living at Crumpsall
Crumpsall
Crumpsall is a suburban area and electoral ward of the city of Manchester, in Greater Manchester, England. It is about north of Manchester city centre...
and then at Victoria Park
Victoria Park, Manchester
Victoria Park is an suburban area of Manchester, England. Victoria Park lies approximately 3 kilometres south of Manchester city centre, between Rusholme and Longsight.It is east of Wilmslow Road and west of Anson Road.-History and description:...
.

The murals were intended to form part of the decoration of the Great Hall, the central room in the new town hall designed by Alfred Waterhouse
Alfred Waterhouse
Alfred Waterhouse was a British architect, particularly associated with the Victorian Gothic Revival architecture. He is perhaps best known for his design for the Natural History Museum in London, and Manchester Town Hall, although he also built a wide variety of other buildings throughout the...
. Entering the room, the first six murals are on the left hand wall; the second six are on the right hand wall. They progress chronologically from the left wall nearest the entrance to the right wall opposite. This basic scheme repeats that of William Bell Scott
William Bell Scott
William Bell Scott was a Scottish poet and artist.-Life:The son of Robert Scott , the engraver, and brother of David Scott, the painter, he was born in Edinburgh. While a young man he studied art and assisted his father, and he published verses in the Scottish magazines...
's murals on the history of Northumbria
Northumbria
Northumbria was a medieval kingdom of the Angles, in what is now Northern England and South-East Scotland, becoming subsequently an earldom in a united Anglo-Saxon kingdom of England. The name reflects the approximate southern limit to the kingdom's territory, the Humber Estuary.Northumbria was...
in Wallington Hall
Wallington Hall
Wallington is a country house and gardens located about west of Morpeth, Northumberland, England, near the village of Cambo. It has been owned by the National Trust since 1942, after it was donated by Sir Charles Philips Trevelyan, the first donation of its kind...
.

The subjects chosen reflect the Victorian ideals through which the history of Manchester was seen, focusing on Christianity, commerce and the textile industry. Brown did a great deal of research to check the details for accuracy and he wrote the descriptions himself.

Recent commentators on the murals have identified satirical and critical features in the compositions which complicate any simple explanation of the paintings as expressions of the "Victorian ideals" that the chosen subjects imply. The art historian Julie F. Codell refers to these as the "pratfalls and penultimates" of history, as opposed to its stately progress.

Most of the paintings contain Hogarthian satire (in contrast to Bell Scott's works). In the first picture the wife of the Roman general wearing a blond wig distracts him from his work; their son — a Caligula in the making — kicks an African servant. The painting that seems to celebrate industrial technology, John Kay: Inventor of the Fly Shuttle, depicts the hysterical inventor fleeing from an unruly mob which is bent on destroying the machine. Instead of culminating in the achievement of modern Manchester, the sequence concludes with a rustic scene in a small village. According to Codell, history is portrayed as fragmented, contested, and as ending in a "penultimate" moment.

This may be related to Brown's interest in anarchism and William Morris
William Morris
William Morris 24 March 18343 October 1896 was an English textile designer, artist, writer, and socialist associated with the Pre-Raphaelite Brotherhood and the English Arts and Crafts Movement...
's utopian socialism
Utopian socialism
Utopian socialism is a term used to define the first currents of modern socialist thought as exemplified by the work of Saint-Simon, Charles Fourier, and Robert Owen which inspired Karl Marx and other early socialists and were looked on favorably...
at the time. However, it also arises from disputes about the more modern subjects. Paintings depicting the Peterloo Massacre
Peterloo Massacre
The Peterloo Massacre occurred at St Peter's Field, Manchester, England, on 16 August 1819, when cavalry charged into a crowd of 60,000–80,000 that had gathered to demand the reform of parliamentary representation....
in 1819 and the end of the Lancashire Cotton Famine in 1865 had been proposed, but both were rejected by the council's committee as too controversial.

All but the last four murals were painted directly on to the wall. They were not created using the true fresco
Fresco
Fresco is any of several related mural painting types, executed on plaster on walls or ceilings. The word fresco comes from the Greek word affresca which derives from the Latin word for "fresh". Frescoes first developed in the ancient world and continued to be popular through the Renaissance...
process but taking advantage of a Victorian technique, the Gambier Parry process
Gambier Parry process
The Gambier Parry process is a development of the classical technique of fresco for painting murals, named for Thomas Gambier Parry.In some environments, conventional fresco colours can rapidly accumulate dirt and grime. Gambier Parry developed a spirit medium for use on a specially prepared...
, which being "spirit"
Alcohol
In chemistry, an alcohol is an organic compound in which the hydroxy functional group is bound to a carbon atom. In particular, this carbon center should be saturated, having single bonds to three other atoms....
based produced a more hard wearing image. Brown completed the last four murals on canvas, after he had returned to London.