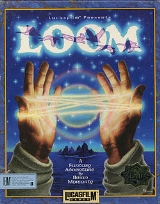 Overview
A loom is a device used to weave
Weaving
Weaving is a method of fabric production in which two distinct sets of yarns or threads are interlaced at right angles to form a fabric or cloth. The other methods are knitting, lace making and felting. The longitudinal threads are called the warp and the lateral threads are the weft or filling...
cloth. The basic purpose of any loom is to hold the warp
Warp (weaving)
In weaving cloth, the warp is the set of lengthwise yarns that are held in tension on a frame or loom. The yarn that is inserted over-and-under the warp threads is called the weft, woof, or filler. Each individual warp thread in a fabric is called a warp end or end. Warp means "that which is thrown...
threads under tension
Tension (mechanics)
In physics, tension is the magnitude of the pulling force exerted by a string, cable, chain, or similar object on another object. It is the opposite of compression. As tension is the magnitude of a force, it is measured in newtons and is always measured parallel to the string on which it applies...
to facilitate the interweaving of the weft
Weft
In weaving, weft or woof is the yarn which is drawn through the warp yarns to create cloth. In North America, it is sometimes referred to as the "fill" or the "filling yarn"....
threads. The precise shape of the loom and its mechanics may vary, but the basic function is the same.
The word "loom" comes from the Old English "geloma" formed from ge-(perfective prefix) and loma, a root of unknown origin; this meant utensil or tool of any kind.

I have a an old czechoslovakian loom and need to know the type of loom. can someone help me.
More
x